Five decades ago, Dr. Ernst Mayr wrote that we'd found almost all the birds.  The great evolutionary biologist (1904-2005) was happy to learn he'd been wrong, and new birds are still showing up. This spectacular yellow tanager is the newest example. The range of the Inti tanager (Heliothraupis oneilli) is within the Yungas bioregion, which straddles Peru and Bolivia.   The bird, first spotted in 2000 but languishing scientifically in the absence of a specimen, was unique enough to justify creating a new genus.

In most bird species, the males are more spectacular, but what does that mean when both sexes are already eye-grabbing? Here the male does its best to show off by adding a black head stripe and a modest crest. 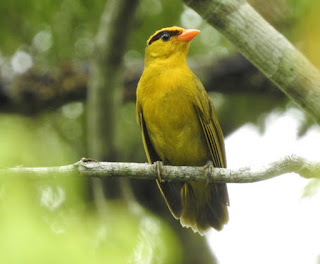 Great!! Thank you your content here. From BMPro, IT Service Profesional in HCMC, Vietnam