As someone of Danish ancestry (there is still a Bille family castle), I keep an eye on science stories out of my little homeland.  This was a surprising one.  An axe found during a road tunnel excavation project is made of stone and 5,000 years old - and the handle is still on it.
The flint axe was found in anaerobic silt that preserved its handle and other wooden artifacts, like paddles.  Museum archaeologist Anker Sørensen reacted as if, well, she'd been hit with an axe handle: "Finding a hilt axe that is so well preserved is absolutely incredible," she said.
It's only been two weeks since another exciting find in the same excavation: the footprints of two people who'd apparently been tending a fish-trap. 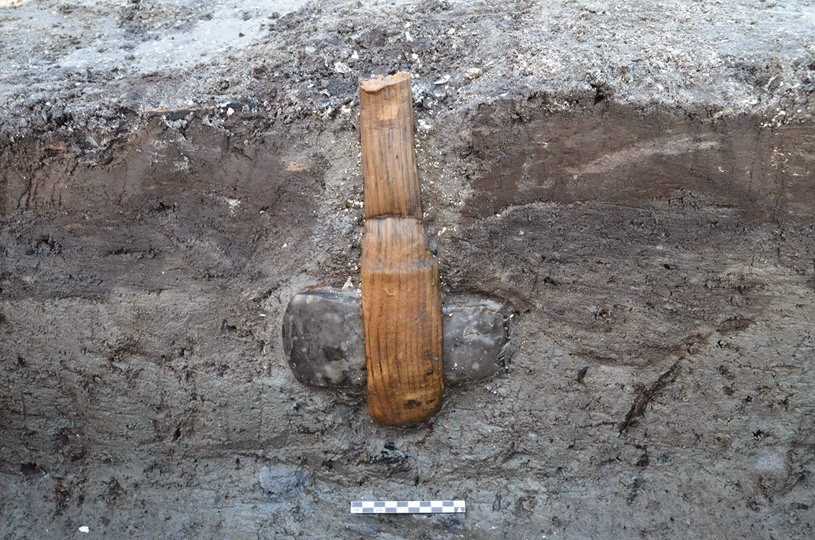 Museum Lolland-Falster released this photo of the axe before it was taken to a preservation lab.
Posted by Matt Bille at 4:50 PM No comments:

New and Improved Amazon Author Page is up

Well, here we are. My horror novel, The Dolmen, is selling decently and getting great reviews, and there are good prices on my books on space history and zoology.  So enjoy the Author Page! 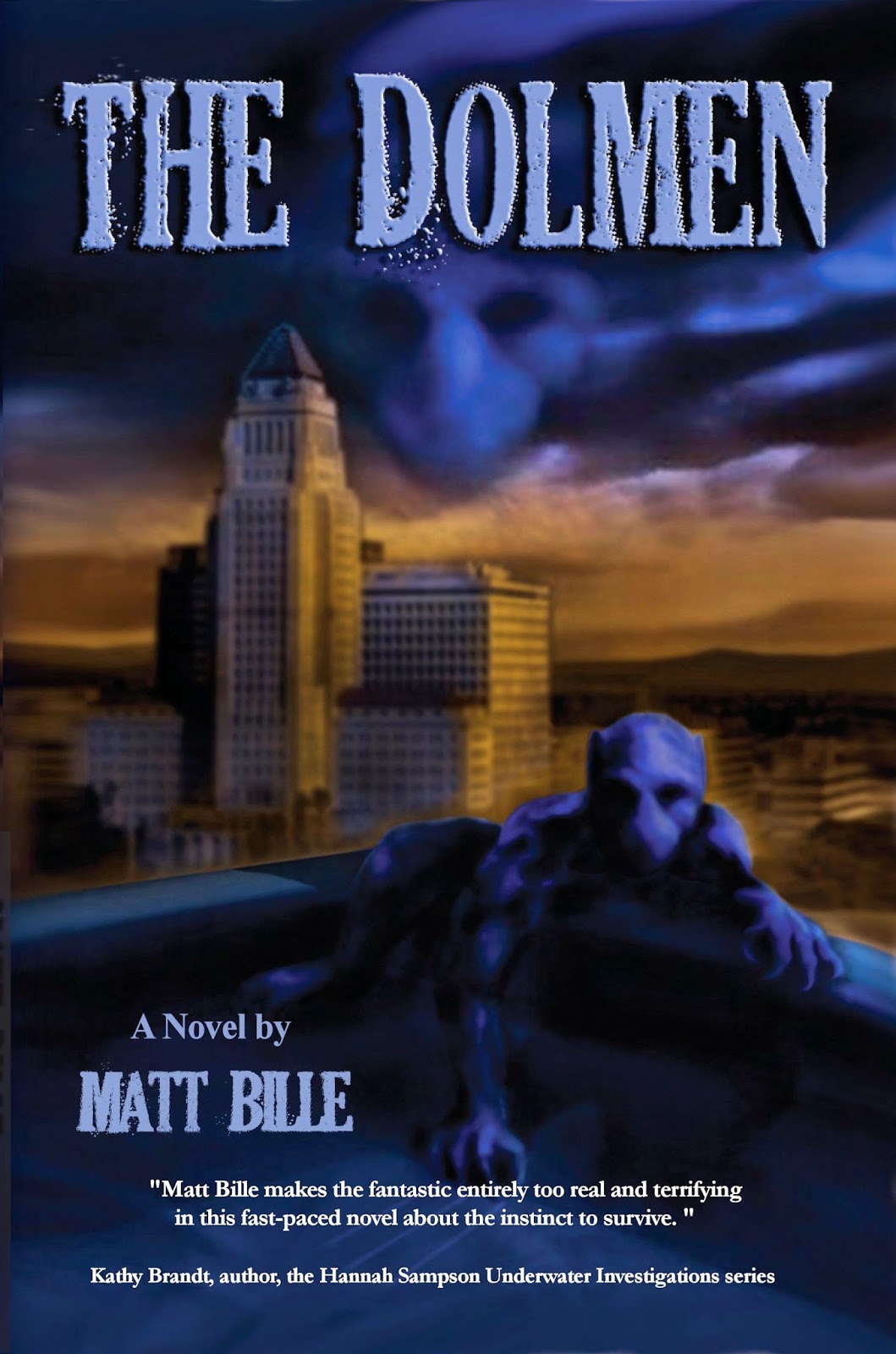 The Dolmen, from Wolfsinger Publications.  Enter a lost world... if you dare
Posted by Matt Bille at 9:12 AM No comments:

The Little Lander That Could is in deep sleep mode on its cometary home on 67P/Churyumov-Gerasimenko half a billion kilometers from Earth.  We saw it touch down - and we actually heard it (I didn't realize it had acoustic sensors until after the fact.)  That little audio clip told project scientists it his a soft layer (dust?) that was very thin and then a hard layer (rock or ice).  The lander tried hammering into the surface (it didn't get far, but that, too, is valuable data) and it detected organic molecules.  For a lander with so short a life, Philae did a lot of science.
Also, it landed on a comet.  Don't forget how amazing that is after a ten-year journey from Earth.
Philae may come back. The comet is headed for the Sun, with its closest approach coming next August.  More sunlight on the solar panels may result in more data as the probe returns to life and contacts us through Rosetta, which will be hovering (ok, orbiting) around until at least December 2015.
It's an amazing story. And it may not be over. 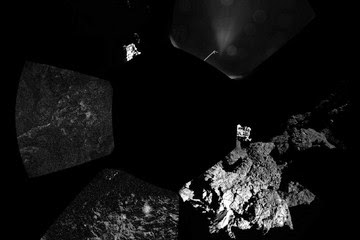 Our first panoramic view of the surface of a comet (ESA)

Posted by Matt Bille at 8:10 PM No comments: 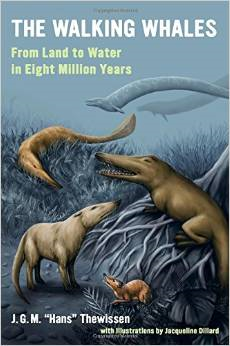 I've read a lot of good books lately on marine life and its prehistory, but Thewissen's stands out.  The veteran paleontologist, a specialist in whale ancestry, simply does everything right in this slender but fact-packed volume.
His discussions of the science are clear and well-illustrated, and his adventures as a paleontologist in India and Pakistan present the risks, the tedium, and the thrill of discovery. Science is, after all, a human story.  One crucial discovery was made by accident when a bone was broken in the lab, and I found that very interesting. Despite all our modern tools, science still depends partly on luck.
The author leads us, with very good explanations, through the complicated business of how evolution transformed land animals into aquatic ones. There were more whales than anyone suspected when the author began his own excavations and searches.  Just twenty years or so ago, whales were often pointed to by young-Earth creationists as an example of seemingly huge change in a relatively short time but with no transitional forms. Now we know that whales are not only fascinating creatures, but offer one of the most complete evolutionary records of any modern group, with many transitional forms we can use to trace the development of particular traits. (The author makes a humorous but insightful comparison to whale evolution by asking readers to imagine the Batmobile being given to a group of engineers with orders to use its parts to build the Beatles' Yellow Submarine.) I wanted a little more explanation of how the diet developed (the whales' closest relatives on land are, after all, vegetarians), but I was fascinated to learn that teeth are in fact present in fetal baleen whales, and traces sometimes show up in adults.
Overall, this book is everything I could have hoped it was. Excellent job!
Posted by Matt Bille at 4:36 PM 1 comment:

...and they are breathing again in the European Space Agency's operations center!

The little Philae lander (100kg, 21kg of which is instruments) left the Rosetta mothership and plunked itself down safely on Comet 67P/Churyumov-Garasimenko. Or pulled itself down: the lander fired mini-harpoons into the surface and winched its way to contact.  The mission was launched ten and a half years ago. Flight controllers had tense moments as they waited out the 28-minute signal delay from the distant comet. NASA was a partner in areas including maintaining deep-space communications.
Congratulations ESA! 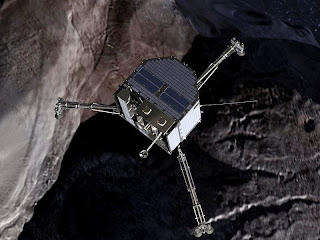 (Artist concept - credit ESA)
Posted by Matt Bille at 9:29 AM No comments:

The brain of the mammoth

Aficionados of extinct animals are sorry we just missed (or hunted to extinction) beasts like the woolly mammoth, the mastodon, and the wooly rhinoceros. But, unlike the dinosaurs, the great mammals have left us some startling specimens frozen in soil and permafrost.
The mammoth called Yula is 39,000 years old and hails from Russia - the shores of the remote Laptev Sea, to be precise. Found in 2010 and now in the hands of the Russian Geographic Society, Yula (a youngster 6 to 9 years old) turned out to have a remarkably preserved brain, showing folds, blood vessels, etc.  Paleontologists are ecstatic about having a look at what made the mammoth tick.
Are rhinos more your thing? Darren Naish's Tetrapod Zoology blog explores what we know- and what we think we know.  It seems the woolly rhino (Coelodonta antiquitatis), usually depicted as resembling a modern rhino in a mink coat, instead might have had a whiff of musk ox about its stocky, long-furred, humped appearance. Or maybe not - prehistoric artists in France depicted it both ways, and Naish suggests the coat, at least, varied with the seasons.  They apparently had low-hanging heads and huge horns, and another British paleontologist envisioned them chomping their way through grasses "like giant furry lawnmowers."
A very large and complete woolly rhino skull was just found in Cambridgeshire in the UK, so that's another piece of evidence under study.  Finally, there's another recent find of note: a spear, about 13,000 years old, made of rhino horn. It was found in Siberia and still looks lethal. It's the first known spear of its type and comes from a place where humans were not previously thought to have lived in that era.
The northern plains of old North America and Eurasia must have been very impressive places. While the mammoth-based economy in the movie 10,000 BC is ridiculous (as are occasional claims the mammoth survives to this day - alas, it does not), these were really big lawnmowers. 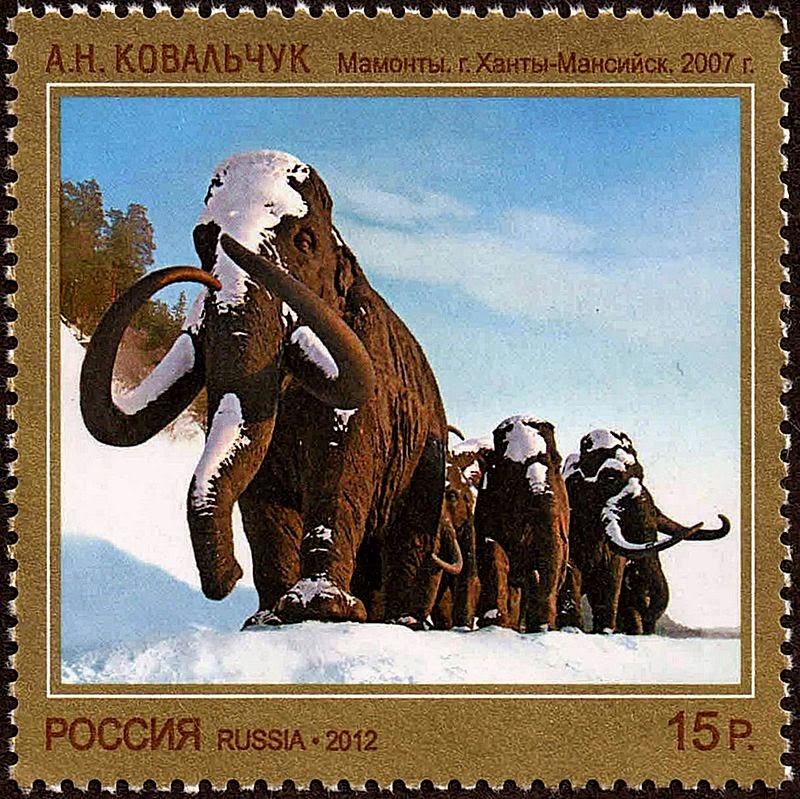 The mammoth, Mammoth primigenius, on a recent Russian postage stamp.

A poem for space - The Explorers

The Explorers
(written on the occasion of the loss of SpaceShipTwo)

The souls departing Earthbound life
Rise to heaven’s plane
Soldier, sailor, priest, or king
The destination is the same
But in an even higher realm
With stars always in view
Meet those lost in exploration
Remembering how they flew


Komarov toasts Gus Grissom
And Resnik talks with Clark
Ramon and Chalwa share a tale
As they look beyond the dark
Adams shares his glory days
With Husband and McNair
And always they watch
And urge us on
To rise above the air.

Don’t cling to mother Earth, they’d say
God has given us the stars
There’s a reason we aspire
To cross the celestial bar
We gave our lives
We don’t regret
To push back the frontier
Remember us by challenging
And rising past your fears

Patseyev, Onizuka
Anderson and Brown
Salute each new endeavour
That lifts us from the ground
To every new thrust into space
They raise their glasses high
And remind us we were always meant
To reach beyond the sky.
- Matt Bille, space historian, 2014
Posted by Matt Bille at 4:07 PM No comments:

We've had the second bad day in a week for a privately built space vehicle, and this one has cost us a brave and skilled man.
Michael Alsbury was an experienced test pilot, designer, and engineer.  Pilot Peter Siebold survived the destruction of SS2, and my prayers are with both families.
A lot of speculation has focused on the hybrid engine, using a propellant combination never flown before (although ground-tested). I won't add my speculation to the quota at this point. It's far too early.  A couple of interesting facts are that the engine housing looks intact except for the nozzle and that Siebold was able to eject - we don't know yet why Alsbury could not.
Richard Branson, who funded the program through his Virgin Galactic, says the program will go on. The second SS2 is under construction. Here's hoping they will press on.  You may call it a toy for the rich, but it could greatly broaden our knowledge of flight in high-speed suborbital regimes as well as popularize the idea of citizen space travel for the future.