A science writer at Denver ComiCon

OK, so I'm not just a science writer. but a general nerd, and Denver ComiCon is a don't miss item on my calendar.  I dress as my favorite literary character, wizard Harry Dresden.  All being Harry requires is:

I dress it up a bit with Harry's amulet and shield bracelet.

Anyway, ComiCon had a skeptics' booth, which I didn't expect, held down by Kyle Sanders and his wife in Ghostbusters uniforms.  Kyle illustrates SKEPTIC magazine and writes the webcomic Carbon Dating.  Great to meet you, Kyle.

There were panels on NASA and space in general with utility for SF writers, like how to construct believable planetary ecosystems.  There were good panels on writing (Peter Wacks of Wordfire Press was especially full of good advice for freelancers).  There was the usual bewildering assortment of elaborate cosplayers, including a Groot from Guardians of the Galaxy in a suit so well constructed to look like an organic whole that I wondered how he want to the bathroom.  Carole Hightshoe had the Wolfsinger Publications booth up with my horror novel, The Dolmen, which was handy since the opportunity came up to give a signed copy to Dresden Files author Jim Butcher.  The enormously successful Butcher treated a writer he'd never heard of as an equal, and I won't forget that.

I also met Mitch Pileggi of The X-Files, who gave me a tidbit on the upcoming reboot: When I said Skinner should be retired and writing a management book about dealing with an incredibly difficult employee, said, "I can tell you this much: Skinner's not retired."
My oldest daughter had a good time meeting Lou Ferrigno, the original Hulk (he publishes advice she uses in the gym), and both daughters enjoyed exploring the exhibit space.

Anyway, a great time was had.  My advice for next year: arrive early for parking.  An estimated 80,000 nerds overwhelm both public transit and parking lots.  And keep some MREs on your person in case the food lines break you.

Posted by Matt Bille at 4:21 PM No comments:

One of my personal heroes is astronaut / fighter pilot / Senator John Glenn.  Now he's encapsulated my own beliefs precisely in this article:

Glenn from space: "to look out at this kind of creation out here and not believe in God is to me impossible." Glenn today: "I don't see that I'm any less religious by the fact that I can appreciate the fact that science just records that we change with evolution and time, and that's a fact. It doesn't mean it's less wondrous." 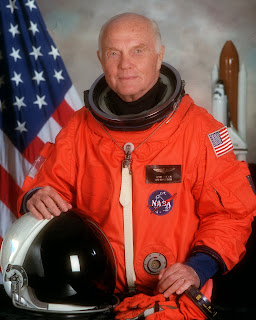 Under the sea - a creature from another time

OK, so it's not really a "living fossil." But that other overused term, "missing link," has some utility here.
Two billion years ago, microbes with a nucleus and other changes from the bacteria and the archaea evolved, and, as this article explains, they kept evolving into every multicellular creature on planet Earth, including us. A new sample from the bottom of the Atlantic Ocean yielded a strain of archaea, dubbed Lokiarchaeum, which had many eukaryote-type features including genes that code for the proteins giving eukaryotes a complex structure the other types lack. . Since the latter evolved from the former, this was a snapshot of early evolution that had scientists jumping up and down (I don't know if the "jumping" part is literally true, but it seems close enough).
To swipe the key language from this article, "Lokiarchaeum was much more complex than other archaea and bacteria, although not as complex as true eukaryotes... a Lokiarchaeum-like ancestor could have evolved into the first full-blown eukaryotes.. Once the ancestors of eukaryotes evolved a complex skeleton, the next major step may have been the origin of mitochondria."
The scientific team is trying to learn more about these creatures, despite the handicaps of limited supply and the annoying fact the microbes keep dying soon after being scooped up.  But the work done so far has given us a look at evolution from the days when dinosaurs were only one of Nature's dreams and humans were not even that.  Keep up the good science, guys!

Everyone's fascinated by the great white shark, a beast that can be 7m long and can (and has) put humans on its menu on occasion. It is the largest and, in some ways, most evolved of a line that goes back 400 million years. Sharks outlasted the mighty Dunkleosteus, the great reptiles like Liopleurodon, and the most fearsome whale of all time, Livyatan melvillei. Today there are nearly 400 known species of shark, and the great white is their metaphorical king (or queen, since the biggest ones are always female).
One thing people like to speculate on is how big great whites get. The maximum length of the species has been subject to countless tall tales, overestimates, and mistakes (for a long time the record was 36.5 feet / 11.1m, but this was a misidentified basking shark.) Looking at claimants from the Azores, Cuba, and Australia, the answer seems to be that the provable maximum length is under 23 feet / 7m. (I've named 7m the "Ellis/McCosker limit," since Richard Ellis and John McCosker have done the most research on this and produced the best single book on the species so far.). There is a case where an expert theorized bites on a whale carcass floating off Australia might belong to a monster in the 25-foot neighborhood (around 7.5m) which would be mean real great whites get as big as Bruce in Jaws.  The question of exact lengths can devolve into a pointless debate over inches/centimeters, so I'm going to say the biggest great whites approach 7m, with exceptional sharks possibly larger, and call it a day. 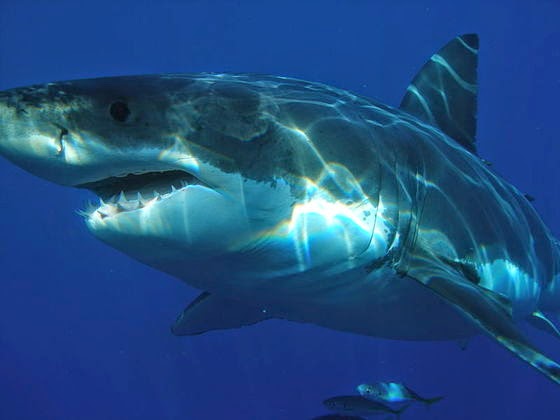 
For centuries, human being killed great whites when they had the chance and otherwise avoided them at all costs. Silly stories about a shark swallowing a whole man in armor did nothing for their reputation. Herman Melville called the great white "the dotard lethargic and dull, pale ravener of horrible meat."
Today, scientists take significant risks in order to learn more about great whites - not to kill them, but to conserve them. This article from Nat Geo tells of a dramatic tagging venture, involving the largest great white ever pulled out alive, tagged, and returned to the ocean. "Apache" is 5.5m (18 feet) long, enormous for a male. the shark weighs about two tons and did not come aboard peacefully, but the conservation team lead by Michael Domeier looks for a selection of sharks, including the biggest (presumably oldest) as well as the smaller ones that are relatively easy to handle. (Relatively.)
There's a lot we don't know about this species, including its mating and migration habits. Without knowing more, we can't tell whether the population is being affected by factors like climate change and overfishing of its prey. Great whites are taken in the pointless and destructive shark-finning trade, but, though classed by the IUCN as Vulnerable, they are not endangered - at least not yet. This is important because healthy top predators are vital to an ecosystem. This article documents how at least one population seems to actually be on the rise.
Those of us who dabble in either sharks or cryptozoology are always asked about Megalodon: Carcharocles megalodon, a distant cousin of the great white, which became extinct over 2m years ago.   While Meg gets 80 - 200 feet long in fiction, we know for sure that they reached at least 15m, maybe 18m, and may have been the largest fish ever to have lived (there's quite a lot of dispute about a couple of older prehistoric fish, but there is no doubt Meg was  at least the largest shark ever.)
Megalodon naturally attracts novelists like, well, great whites are attracted to chum.  A lot of the literature is fun, if little of it could be called scientifically precise. Steve Alten has made a good living off his fictional Megs. Briar Lee Mitchell write a good novel with the all-time-best title of Big Ass Shark.  There are lesser-known novels, incredibly bad cheap-crap movies, and even worse fake "documentaries," along with other ways to get a Meg fix, but the fish is extinct, period, done, over with, gone, dead. the only really interesting possible Meg sighting, which novelists have played off a good deal, was the New Zealand shark of 1918 claimed by lobstermen to be ghostly white and at least 100 feet long. This case was accepted by an expert who interviewed the men, and it's frankly still a mystery: if I had to make a guess, I would suggest an exceptionally huge and unusually light-colored great white, plus human exaggeration factor, was involved.  (Ellis once observed that the name "great white" only makes sense if you're looking at the shark upside-down.)
So no Meg, but we'll settle for the great white - which is more than enough. It's pretty damn awesome, and hopefully we can keep it on Earth for millions of years to come.