America has some well-known cryptozoolgical puzzles, like Bigfoot, but it also has a rich folklore, still developing in the present day, of monsters, lake serpents, and just plain odd creatures reported anywhere from once to 3,000 times (Bigfoot again).
To take a quick tour of this richness, we have Chasing American Monsters. 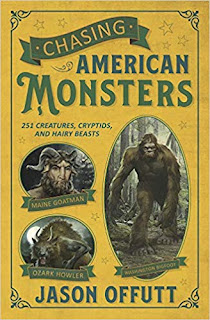 Jason Offutt clearly had a good time creating this tour of states and their monsters, and readers will happily come along.   All fifty state entries have some interesting nuggets, even for a well-informed cryptozoology fan who's read collections like this before. In my favorite spot, Alaska, he mentions some recent sightings of the Lake Iliamna monster I'd forgotten, although he's another writer who refers to early Russian reports without  details or sources.

On Stellers' sea ape, Offutt expresses a healthy skepticism that's too often absent here.  To get the nitpicks out of the way, Offutt repeats some falsehoods (e.g., that a monster photo appeared in a certain issue of the Tombstone Epitaph when it's long been disproved), and some misstatements like the wels catfish being a species from Spain, when the wels is not native  (it has been introduced) and has a far greater range. There are few primary sources here: almost everything is from media and online materials. Nothing wrong with that, but a bit more investigation is warranted before giving us, say, the supposed Loess not-quite-human skeletons.    Some creatures presented here are clearly just tales not meant to be taken seriously  (no one is expected to believe in fish-eyed Night People, complete with clothes and children) , but many are treated as animals, and it's not always certain which is which (to which the author would no doubt reply that's part of the fun.)
All that said, this isn't meant to be a zoological text book,but it succeeds handsomely in being an enjoyable romp through monsters both familiar (lake monsters show up a lot) and obscure. Who knew a California woman had reported human-size roaches, or that a Georgia woman was shot as a werewolf, or that a lizard bigger than a Komodo dragon was once reported from Kentucky?  Who has heard of the giant amphibious ape that supposedly attacks cars near Dewey Lake, Michigan?  Oklahoma is home to more than just football and cows - it has a wolfman, an elkman, and a boarman! Vermont has a pigman, and West Virginia a big primate called the Stone Man. Getting to Wyoming, I never knew that anyone had claimed to see an actual live jackalope.
You too, will have a great time reading through these tales.  Offutt comments at the end he thinks a few of the monsters are real,but you don't need to believe in any of them to enjoy this book. Wonderful illustrations add to the fun.
Posted by Matt Bille at 3:12 PM No comments:

What if Sputnik 1 had failed? (my new article in QUEST)

The new issue of QUEST, the History of Spaceflight magazine (Vol 26 #2), offers 13 articles exploring "What if?" Mine is "What if Sputnik 1 had failed?"
All my friends in the space history community are here, including Jim Vedda (alternate plans to go to the moon), Dwayne Day (events resulting from JFK's death), John Logsdon (if Apollo 8 had failed), and many more, including my First Space Race co-author, Erika Maurer, who looks at the Space Race as a poker player might.
Thanks to publisher Scott Sacknoff and all the staff at QUEST.
You can download the issue here! 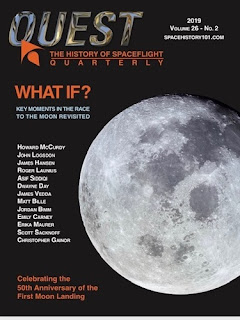 Posted by Matt Bille at 8:41 PM No comments:

Lake Iliamna, in Alaska, has a population of a few hundred harbor seals. hey constitute the only freshwater seal population in the Americas. But were these animals born here, and were they permanent residents or transients that came and went to Bristol Bay via the Kvichak River? Studying their teeth and the minerals deposited therein has given us the answer. This is their home and has been for many generations, and they stay year-round despite the fluctuations of the food supply caused by the summer salmon run.
Posted by Matt Bille at 3:08 PM No comments:

The Iliamna "giant fish" stories have always fascinated me. It's the only story about a large "lake monster" I think will prove to have something real and unusual in it.  The thousand-square-mile lake, so remote there are no roads to it (only a mountainous portage from Cook Inlet littered with debris from old trucks and the boats they were transporting), hosts the world's biggest salmon run.  It's at least 800 feet deep.  Jeremy Wade (River Monsters) suggests it's a kind of sleeper shark, while a more common theory is an undocumented population of sturgeon that runs larger than most.  The reports are pretty consistent about shape and features, with color and size varying, and it's certainly possible for a fish to adapt to seasonal variations in the food supply (there are trout, char, etc. that don't migrate in and out via the Kvichak River as salmon do).
Enter marine ecologist Bruce Wright, who is sure there's something down there and intends to use a moored underwater camera to try for a picture of it (it, they, them, whatever: since stories go back before the first white people showed up a few centuries back, obviously there must be a population that's stable over time).  A retired military colonel named Mark Stigar thinks, so, too, since he tried fishing for it with a line of hooks on the bottom, and something dragged the anchor and damaged the gear.  I've written about it myself, though I've not yet been able to visit.
Will they find anything? It would not surprise me.  What will they find? It might be something to surprise all of us. I hope it is.
Posted by Matt Bille at 1:41 PM No comments:

DNA proof of when people entered the Americas?

When people came to the Americas (and how) has always been a huge puzzle to which we do not have (and may never have) all the pieces. The idea that the Clovis people came over the Bering land bridge 10-12,000 years ago has been largely set aside -they were important but they were not first. Pre-Clovis data are claimed in several places across both American Continents.  Evidence from the Pacific Northwest has pushed the arrival date back to at least 14,000 years, and sites like Monte Verde in Chile may come to be accepted as proven , which would not only raise the question of when but how.  Did people first come to the Americas via boat or raft, or did they come by land but sail down the coast, planting populations much further south than migration by foot could have done? "Dusty" Crawford of the Blackfeet tribe has, according to CRI Genetics, DNA which is unusually unmixed that is, his ancestors intermarried very little with other groups) shows that, through 55 generations, his ancestors arrived (and stayed) beginning 17,000 years ago.  The group he belongs to genetically  apparently originated in the U.S. Southwest, meaning his ancestors might have come down via the ocean in a pre-land bridge migration. The ocean migration theory is hard to prove because so much of what used to be the Pacific Coast has long since vanished under water, but everything we learn seems to point to a more complex series of events than a few groups walking over from Siberia.
Posted by Matt Bille at 1:22 PM No comments:

Dunkleosteus terrelli is the biggest, nastiest, and coolest species from the Devonian, the "Age of Fishes." In my quest to learn and collect everything about it, I add the following:

First, we have a link to an MSN clip on the predator, with very nice animation, and my friend Lee Hall of the Cleveland Museum of Natural History.  The "Makes a Great White Look Like a Goldfish" and the text "Twice as long as a Great White" are silly: they were probably close to the same length, with Dunks probably longer  Not Lee Hall's fault, he isn't the one who wrote that, and he knows better).  The outliers among great whites cluster just short of 7m, while Dunks of 7-8m existed: the monster of the group is a Cleveland specimen that may have been close to 9m depending on the size and construction of the tail, about which we know little.

Also, some neat discoveries of Dunk stuff: a little green Dunk in a game I have no idea how to play, and a beautiful embroidered Dunk patch framed into a trading card from Upper Deck. 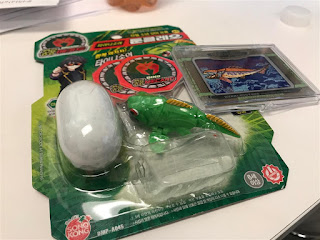 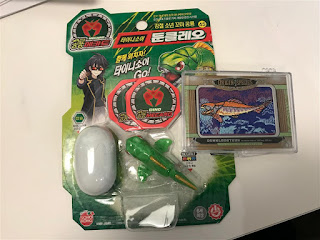 Posted by Matt Bille at 7:54 PM No comments: