Exactly one day after I wrote a post holding out some hope for the ivory-billed woodpecker, the US government has spoken: there isn't any.  The U.S. Fish and Wildlife Service has declared 23 species of fish and birds are gone.

The ivory-bill, of course, is the star example.  Should it be declared extinct? The last officially confirmed sighting was in 1944, but sightings, bark damage characteristic of the ivory-bill, and recordings of the tin-horn "kent" call have sparked numerous searches and a slender thread of hope.

There's another consideration, one I hadn't thought of. A Cornell University bird biologist named John Fitzpatrick thinks so.  As quoted on ecowatch.com and other media, he said, "Little is gained and much is lost," by such a declaration. "A bird this iconic, and this representative of the major old-growth forests of the southeast, keeping it on the list of endangered species keeps attention on it, keeps states thinking about managing habitat on the off chance it still exists."

Maybe an off-chance is all we can ask.

One of the last known ivory-bill photos from the wild, taken in Louisiana in the 1930s (out of copyright)

Posted by Matt Bille at 4:44 PM No comments:

Any hope for the ivory-billed woodpecker?

Is there hope? A little bit. Maybe an extremely little bit. But for myself, I haven't quite closed the file.

Audubon published this article on sightings and unfortunately long-range video tapes. Michael Collins (not the late astronaut) has spent many years in pursuit of the bird and thinks he's nabbed it, but his evidence so far, including sound recordings, hasn't been enough. 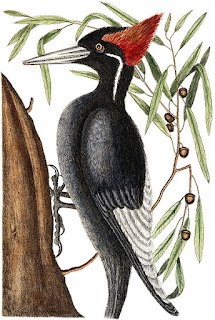 Artist unknown, Marked free for use on Wikipedia Commons
I know of two sightings not recorded officially, although neither is in the post-rediscovery-post-extinct-again era.  One was by an ex-forest ranger in the 80s in Arkansas that unfortunately did not impress the ranger she talked to. The other is haunting. I once met a woman named Ruth Laws, or Lowes, by chance in a museum in Denver. She'd been 10 or 11, hiking with her dad in the Singer Tract in the early 50s. Her father shushed her and pointed to a "magnificent red, white, and black bird" sitting on a stump. Her dad whispered, "That is an ivory-billed woodpecker. Take a good look, because you'll never see one again." They watched it for a couple minutes before it left. I talked to a prominent ornithologist who asked for her contact information, but I didn't have it and couldn't find her again.
Is it out there? The chance is tiny. But tiny isn't the same as zero.

The book is based largely on sighting in Louisiana.

Is the bird out there? The chance is tiny. But tiny isn't the same as zero.

Posted by Matt Bille at 3:49 PM No comments:

Of Books and Beasts: A Cryptozoologist's Library

Coming Soon! Out on all platforms December 1. The date it's available for preorders has not yet been set by the publisher. Enjoy 380 reviews of books on zoology, cryptozoology, related sciences, and fiction. There's never been a book like this. 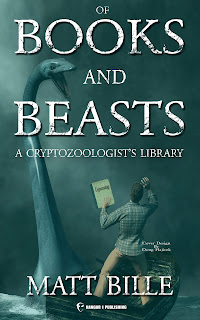 Posted by Matt Bille at 3:28 PM No comments:

I never liked the "Clovis first" hypothesis that placed the first people in the Americas only 10-12,000 years ago.  The populating of two huge continents with three million people, as well as the extinction of the megafauna, always seemed likely to take longer than that.  Remains found in Alaska dated to 11,500 years pushed the envelope a bit.   The dates kept creeping backwards, to 14,000, then 14,500 (Chile) and then to 16,000, but all those remined somewhat in dispute.

This nails it.  Who came over land bridges and who came down the coast by raft or boat., and exactly when, may never be completely determined. The Pacific coast has receded and the ocean has advanced, destroying much evidence and putting some sites forever out of reach. But we know - and it looks like independent researchers are almost, although not entirely, on board here - that a group of humans lived in New Mexico at least 21,000 years ago, and maybe earlier. 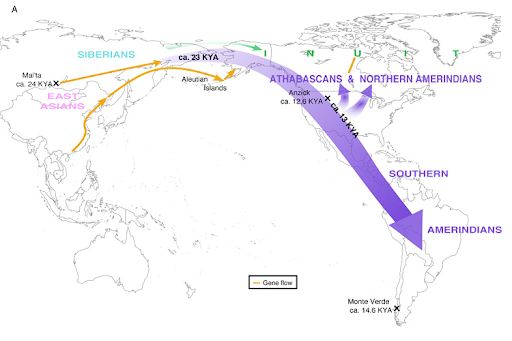 Vie as of 2015, published by UC Berkley, marked by Google Images as free for use 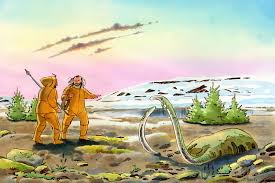 First Americans, published by UC Berkley in 2015, marked by Google Images as free for use

It's a triumph for science.  And, for my friends in cryptozoology, it's the death knell to the belief held by a fringe group that "science" hides evidence that would contradict established theories and maybe make older scientists look bad.  The textbooks need some rewriting.

Congratulations to SpaceX and Inspiration4

I want to go to space. Always have, always will.  So the first mission to orbit with non-professional astronauts was really, really cool.  The apogee of 585 km (364 mi) was the fifth-highest altitude ever for a crewed orbital flight.  Inspiration4 raised funds for St. Jude Children's Research Hospital, with St. Jude's Physician Assistant Hayley Arceneaux on board. After a reportedly perfect mission (except for a "minor waste management problem" - that doesn't sound like fun) that included research on space radiation at that unusual altitude, the crew splashed down Saturday evening off the Florida coast. Not many details or video clips have been released yet, but given that Elon Musk does space publicity like no one else, a lot more is forthcoming.  Congratulations to all!

Yes, I still want to go. 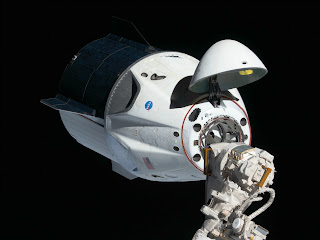 SpaceX Crew Dragon at ISS docking. The Inspiration4 mission used a modified capsule with a panoramic window in place of the docking post. (photo NASA)

(no images included from this mission because all are copyright SpaceX: see the mission link above)

The memorable book by Michael Leinbach and Jonathan Ward, Bringing Columbia Home: The Untold Story of a Lost Space Shuttle and Her Crew will get the documentary film treatment. The authors are partners in the production. No director or release date has been announced.

Here's the review I wrote when the book came out.

Posted by Matt Bille at 8:31 PM No comments:

A bit of self-promotion: The Dolmen

Sometimes Amazon reviews of The Dolmen make my day. I set out wit this novel to create a new and plausible "monster," something readers could believe in and maybe even sympathize with. After reading a lot of folklore, I picked the korrigan. The word korrigan can refer to three different entities in European folklore, including a red-haired elf-like creatures, but I picked one that corresponded with some other legends such as kobolds. I've had some good comments indicating I made it plausible, so I'm happy with that. Link below to buy! AMAZON.COM
The Dolmen
The Dolmen
Posted by Matt Bille at 9:02 PM No comments:

I’ll be on Colin Schneider’s cryptozoology radio show on Monday the 13th at 8PM Eastern. I’ll be announcing the publisher and release dates for my new book, Of Books and Beasts: A Cryptozoologist’s Library, which reviews 380 books on cryptozoology, related sciences cryptozoologists should be familiar with, and fiction. We’ll also visit one of my favorite topics, the mysteries of whales. Join us! Links.
Listen to radio show: https://tunein.com/.../Paranormal-King-Radio-Network.../...
Live chat: https://paranormal.olicentral.com/index.php
You may want to tune in a minute early, since it goes through the network’s web page. Chatroom opens 30 minutes before the show.
There will be an archive link for later listening.

Posted by Matt Bille at 3:59 PM No comments: 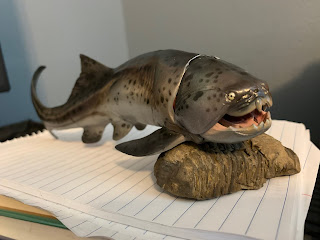 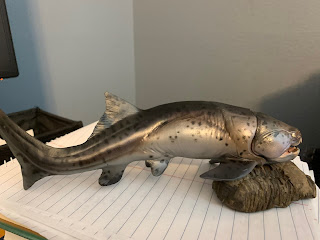 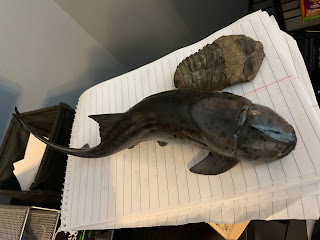 PSNO is a scientific art shop in China, and their new Dunk is certainly a work of art. This vinyl model, just over 25 cm (~10 inches), was created at approximately 1/24 scale (PNSO does not specify). It's wonderfully organic-looking: suspend it in a fish tank, and people who don’t know fish well may assume it’s one of the live inhabitants.  The head, in particular, is a terrific piece of work. The head tilts up while the lower jaw swings down, offering a more realistic simulation of the Dunk’s feeding mechanism than any other model.

The paint job is lovely and believable. The subtly textured skin, with larger wrinkles where they should be, is another feature making this look like a moving, living animal.  The surface texture is carried all over the model, with no skimping on the underside, and the armor, muscles, and other structures under the skin look realistic as well.

The fins are ok, given that we don’t know their exact shape or location on the living animal. I think the pectoral fins look just a few millimeters too far forward, but there are other models and illustrations showing them like this.  The pecs also have a plausible near-triangular look instead of the weird coelacanth-like shapes we see on some models. I think the sharklike tail is almost right, just a bit unbalanced. I would have made the upper lobe a little shorter vertically and the lower lobe slightly  larger and stouter.  EDIT: I've been informed by a paleontologist Christian Klug that fossils from Morocco show the dorsal fin starts right behind the pectoral girdle, so it SHOULD be further forward.

A unique thing is that this model, being vinyl and sturdy and thus suitable as a toy as well as a collectible, has a backstory. Its name (the sex is not given) is Zaha. Zaha, the text tells us in first person, is about 6 m long and considers itself, justifiably, the invincible ruler of the seas. It wonders, though, why its friends (it's odd to imagine a Dunk with friends) are getting fewer.

This is a magnificent addition to the fleet of Dunks available today.  It may be my new favorite among all the vinyl models.

The Last Unicorn: A Search for One of Earth's Rarest Creatures 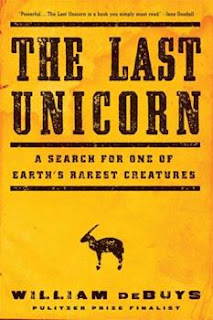 Anyone pondering trekking into the wild after a rare or reported animal will learn what it’s like in deBuys’ account of his travels in search of the saola. The saola or Vu Quang ox (Pseudoryx nghetinhensis) was discovered only in 1992.  With a small team led by conservation biologist William Robichaud, journalist deBuys sets off to survey the watershed of a river called Nam Nyang, a place no Westerner has ever seen.  The team wants to examine probable saola habitat, understand the health of the ecosystem, collect as much information as they can to support conservation, and remove the snares and traps of poachers when they can. The journey by boat and foot into central Laos includes an unending series of dangers, including unreliable companions, treacherous terrain, and unexploded bombs. Yet the author finds, and memorably chronicles, human friendship and natural beauty even in the most trying of circumstances.

Elsewhere in this book, deBuys chronicles the discovery and confirmation of the saola and the other new mammals from Vietnam and Laos. He explains how little science knows about the needs, range, habits, and characteristics of wild-living saolas. Occasional kills or lucky captures, plus some camera-trap photos, are all science has to go on.

The author also describes the precarious context, natural, economic, and political, in which the animal and its remaining habitat exist. The saola's already-tiny population appears to be shrinking.  Poachers don't target saolas, but snares are indisciminate, and legal and illegal resource extraction is nudging deeper into the remote and relatively undisturbed regions of the country.

One Laotian guide mentions the phi kong koy, a red-haired, humanlike primate known as nguoi rung in Vietnam. Everyone, it seems, believes in this animal, although deBuys meets no eyewitnesses.

The party ends its trip without seeing a saola, but accomplishes its other objectives, and one of the fortunate legacies is this gripping and informative book.