I write often in this space about how we need a better understanding of cetaceans, their habitats, and their needs if we are to conserve the 90-ish species of whales and dolphins around the world.  (New species are still being added.)  I've recently worked on satellite-based sensors, but here's another option - Snotbot.
The spout of a cetacean is not water. It's a complex mix of exhaled breath, some water vapor, and - as in the breath of humans - molecules of mucus and other substances that give a clue to the host's health, respiration, stress, and even exposure to toxins.  But how to capture a whale's exhalations?  Snotbot is a an ingenious solution developed by the Ocean Alliance.  It's a weird-looking contraption, a mini-drone that takes advantage of the explosion in UAV technology to let researchers stay up to a half mile from their sensitive subjects and make passes through their spouts without the whales even noticing.  (If you think about it, why would a surfaced whale ever look up?)
Supported by an army of citizen contributors, including my Project WHALES teammate (see article below) Laurie Baker, Snotbot, with scientists from the Ocean Alliance and volunteers from Olin College, has already been field-tested.
What to know more? Here's a video featuring no less an explorer than Patrick Stewart, aka Captain Jean-Luc Picard of the starship Enterprise.  (Fun Fact: the creators of Star Trek: The Next Generation meant Picard to be a descendant of the Piccard family of marine explorers, one of whom made the first dive to the bottom of the Marianas Trench in 1961).  If you want to follow the first expedition, go here. Snotbot is giving us a window into the lives of whales and dolphins that no other tool can. 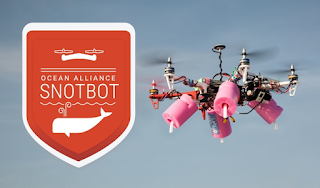 The Snotbot logo and its unique tool (image Ocean Alliance)

I like to review novels that lean a lot on science and technology and tease out fact vs. fiction. The thrillers of James Rollins are definitely in this category.
Rollins is working a familiar formula here - the discovery of ancient knowledge with impact on modern science - but he works it like no one else. Globe-trotting adventure, thrilling escapes, interesting characters, and lots of high-tech gadgets are on plentiful display.  Another thing that distinguishes Rollins from some competitors is sheer writing ability. Rollins has always been good with the action, but in this novel he hits his high point in creating living, breathing characters we feel for.

The best character here, though, is not human - it's a genetically modified gorilla named Baako. Baako's inner thoughts are believable and his interaction with his human friends is not just emotional, it's heart-rending. We share every moment of an ape researcher's despair when a Chinese maniac prepares Baako for vivisection.Along the way to this pivotal scene and the following rescue (you knew there would be one), Rollins introduces mysterious human ancestors and human-ape hybrids (not created by crossing the animals, that's been discredited, but by careful gene editing, adding traits of one to the other, which is scarily plausible.) He does, this being fiction, take it further than fact allows (no, the ancestor once called Meganthropus was not eight feet tall. Or seven. Or maybe even six).  Rollins no doubt knows the name is obsolete, but it's more fun to deal with "Meganthropus"  than with "one more of those endless Home erectus variants."
Rollins' novels  rely heavily on science and technology. The latter is good as always. The former is a mix. Rollins does enormous research and finds obscure details to ground his narrative (yes, Neil Armstrong really did go on an archaeological expedition to Ecuador.) The challenge for the reader is that Rollins presents both good science and fringe/crackpot science, and he says in his Afterword that he believes at least some of the latter to be true. Even the ultimate crackpot theory, that the Moon is artificial, gets a sympathetic ear, although Rollins doesn't endorse it.
Another odd mistake is that Rollins surely knows better than to call Gigantopithecus a gorilla when it was related to the orangutan (I tried to find current scientific opinions to the contrary, but could not, except for those who hope Giganto = sasquatch (Rollins does a nice job of teasing a possible Yeti connection).). This confusion, and occasional gaps in the logic (how did they get that vanload of chimps out of China?) forced me in my Amazon review to take off a half-star: I was tempted to give it five for sheer entertainment value.
Despite the inclusion of fringe science, the reader of this book will learn a great deal about the latest in genetics, animal communication, and a dozen other fields. I write science and history, so I have some concept of the research involved here. Every Sigma Force novel shows the results of what must total several man-years of hunting for, reading, and analyzing information. So kudos to Rollins for a world well crafted, especially in this book.
Posted by Matt Bille at 3:21 PM 3 comments:

My day-job company was nice enough to fund a look at what space-based resources cab do for whale and dolphin conservation and science.  Project WHALES (Whale/Habitat Advanced Location and Environment Smallsats) examined space-based resources for tracking tagged whales and for advances in environmental science, imaging, and so on that would be of use.

The Marketing and Communications Department found a writer from IDG Connect interested in putting the project in an article, and here we are. 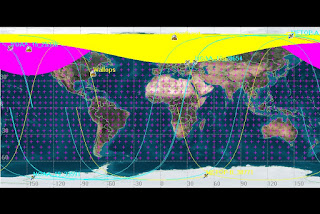 Coverage by existing ARGOS satellites and ground systems: very useful, but with gaps that increase as you approach the equator. (NOAA) 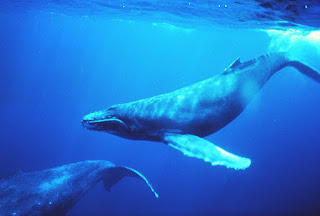 Humpbacks are one of many large species still needing protection.

Posted by Matt Bille at 9:53 AM No comments:

In nature, large animals tend to be long-lived.  There are exceptions (sponges and clams are among the oldest living animals, and some corals may live over 4,000 years), but whales were the longest-lived vertebrates we knew of. One bowhead whale made it to an estimated age of 211 before (of course) a harpoon ended its career.
Now we find a fish - a shark, to be exact - which lives a low-energy lifestyle in deep cold waters of the Arctic might be the oldest vertebrate anywhere.  The sleeper sharks are probably the world's biggest sharks after the huge filter-feeders, the  whale shark and basking shark.  The Greenland shark, (Somniosus microcephalus) records its age in accumulating tissue layers in the eyeball.  One shark recently tested, a 5-meter giant, was approximately 392 years old. Even more outrageously, that may be the average for Greenland sharks. Somewhere in the dark seas may be a shark 500 years old.
There is some difference of opinion in how many species of sleepers there are (one figure is 17), but they are widespread. The oft-cited website Fish Base says they are found in Arctic, Sub-Arctic, and Sub-Antarctic, waters, plus continental shelves in cold seas, and even in tropical waters.  Pacific sleepers may reach 8m (per a sighting from the submersible Nautile off Japan)  and maybe bigger: if the huge fish sighted by the crew of the submersible Deepstar 4000 in 1968 was, as some authorities think, a sleeper shark, it was estimated at over 10m, maybe over 11.  (If they are wrong - and the crew of two men reported bigger eyes and different tail shape - there is a still-unknown fish the size of a bus out there.) 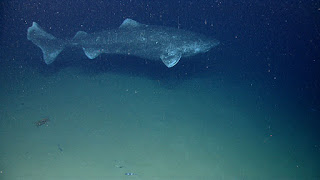 Kilometers beneath the icy seas off Greenland, the great shark hunts prey near the seafloor. (Image NOAA)

So a tip of the hat to the Greenland shark - and to the animal alive today that might have seen the first post-Columbus Europeans to reach North America sail by.

Australian scientists are on the verge of pinning down two new species in the Solomon Islands: a previously undiscovered member of the group known as monkey-faced bats and a giant rat.  Some people would say we don't need a new rat, let alone a giant one, but a report by a local chief, Esau, was the inspiration for the current expedition, and it would be a definite gain for science.   The monkey-faced bats are a group of five species indigenous to the islands (according to the article linked: I note there is also an animal called the Fijian monkey-faced bat. Now I've confused myself, thank you very much. See a good article on the critically endangered Fijian bat here. The Fijian and Solomons monkey-faced bats were originally in the same genus, but the Fijian species was moved out of Pteralopex and got its own genus, Mirimiri, in 2005).
Now where was I? Yes, the Solomon Islands monkey-faced bats.  Dr. Tyrone Lavery notes these bats have "evolved here in Solomon Islands to take on roles that in other places would be occupied by things like monkeys or possums."  Meanwhile, in Gibraltar, a place one would think had been cataloged long ago, the discovery is not a new species, but the news that the Greater Horseshoe Bat   resides on the island is a reminder that  we don't always know what's right under our feet - or right over our heads.

Example of one of the Solomon Islands monkey-faced bats. P. atrata, shows why the genus has its popular name (illustration credit unknown)
Posted by Matt Bille at 7:11 PM 2 comments:

Shame on me. Neil Armstrong was born on August 5, 1930, and died August 25, 2012. He's obviously most famous for his time with NASA as an astronaut but he was also an engineer and test pilot for its predecessor, the National Advisory Committee on Aeronautics (trivia: the acronym was pronounced n-a-c-a, never "nacka" ).  Neil became part of NASA when it was created in 1958, and the rest is history.
The photo below shows the young test pilot in the Bell X-14 experimental vertical takeoff and landing (VTOL) aircraft in the 50s. 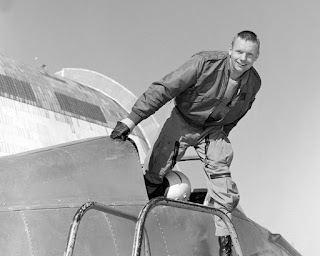 Posted by Matt Bille at 6:48 PM No comments:

Herman Melville was born 1 August 1840. He was, of course, the sperm whale's great popularizer. He also recorded much of what was known about whales and whaling in those days (and lifted  passages from at least one previous author on the subject.)  He based his narrative on what really happened in 1820 on the whaleship Essex.  Some scientists have been wary about the Essex narrative: would a sperm whale really ram its head, containing its great sonar sensor/cannon, into a ship? Recent study, though, indicated it could have done so safely.
Melville wondered if the whale as a species could long endure "so remorseless a havoc" as the 19th century whaling fleets were inflicting.  It turns out, though, the Yankee whalers were amateurs.  The killings of that century were nothing compared to what giant, motorized whaling fleets, including the Japanese and Scandinavians but most especially the Soviets, would do in the 20th century. From 1947-1972, in Antarctic seas alone, Russian fleets killed over 63,000 sperm  whales. The species, amazingly, survived even this kind of "havoc" and is the most numerous of the great whales, the major baleen species all having been decimated before a 1986 moratorium.
The sperm whale remains one of Nature's giants, with records from 68 to 84 feet accepted by various authorities. It is also a species about which we still have many questions. We don't even have a universally accepted figure on how many of these deep-diving squid-hunters exist.  We don't know why they strand on the shore. We know they communicate, but we don't know how detailed their "talk" is, or what they are saying.  Maybe for now we'll just settle for awe and wonder. 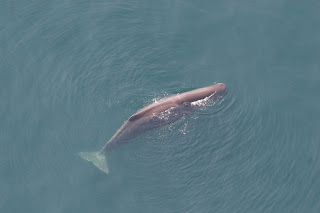 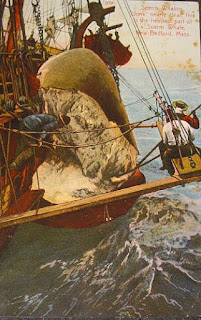 The Great Sperm Whale, in life and death
(Top: NOAA. Bottom: out of copyright)

Posted by Matt Bille at 3:47 PM No comments: