35 years. Coming off a 24-hour stint in a Titan II ICBM solo. Hearing it on the car radio. Rushing home to turn the TV on with my wife. Watching the video/film replays. Pointing to a tongue of pink-orange flame at the lower SRB segment and saying over and over, "That shouldn't be there." Hypothesizing there was a defect in the solid-fuel casting making a crack, and flames had blasted through the casing. Never thinking of joint failure because I couldn't remember ever hearing of one on the solids I knew best. Praying. Watching Reagan quote High Flight. Crying for them all. A morning never to be forgotten. Ad Astra.

The Explorers
Souls departing Earthbound life
Rise to heaven’s plane
Soldier, sailor, priest, or king
The destiny's the same
But in an even higher realm
With stars always in view
Meet those lost in exploration
Remembering how they flew
Komarov toasts to Grissom
While Resnik bonds with Clark
Ramon and Chalwa share a tale
As they look beyond the dark
Adams shares his glory days
With Husband and McNair
And always they watch
And urge us on
To rise above the air
Honor Mother Earth, they’d say
But look up to the stars
God gave us the vision
To cross the celestial bar
We gave our lives
(we don’t regret)
To push back the frontier
Remember us by challenging
And rising past your fears
Patseyev, Onizuka
Anderson and Brown
Salute each new endeavor
That lifts us from the ground
To every new thrust into space
They raise their glasses high
And remind us we were always meant
To reach beyond the sky.
- Matt Bille, space historian, 2014
Posted by Matt Bille at 9:22 PM No comments:

Discoveries: A Dinosaur's Butt and an Orange Bat

There's always a lot going on, even if most of it is lost in the coverage of riots and disasters.

I love paleontologists, but maybe they should get out more, given the exitement over the first fossil showing a dinosaur's butthole.  Granted, this is important in understanding the physiology of dinosaurs, but.. (hah)

Meanwhile, birds of paradise are among the planet's most amazing-looking creatures,and they are not just stylin' but do intricate mating dances. The Vogelkop superb bird-of-paradies (yes, that's the name)  makes 44 species in the family Paradisaeidae. It's black,an almost indescribable black, absorbing almost all the light hitting it, but males reveal a bright blue "chest plate" and do a unique dance which, we suppose, is irresitable.

From Guinea, from the caves of the Nimba Mountains, comes a spectacular orange bat. It's so spectacular it's not clear why it was missed right now, but scientists working in the area knew when they spotted it it was something new.  The linked article gives a good description of the process the discoverers went through to distinguish it from known species (color alone is not enough).

Posted by Matt Bille at 7:34 PM No comments:

Owls of the Eastern Ice: A Quest to Find and Save the World’s Largest Owl

Blackiston’s fish owl is the world’s biggest and rarest owl. It has a wingspan approaching two meters and a fluffy, shaggy appearance Slaght likens to a juvenile bear with feathers glued on.  It’s scattered in pockets of Russia, China, and Japan, huddling in sections of old-growth forest with large nesting trees and streams or rivers that don’t freeze over.  The total population is perhaps 2,000. 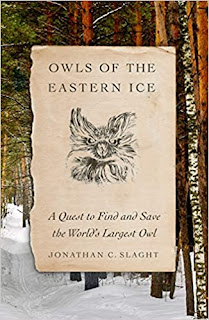 In Russia, where the species was only found to exist in 1971, it clusters along the Pacific coast.  That’s where Slaght, the son of diplomats and a good speaker of Russian, joined a Russian scientist to find the owls, document locations, and attach GPS tags to as many as possible.

This is a book about five years of hard work in unforgiving terrain where humans keep an eye out for the Amur tiger, the huge brown bear, and the armed and dangerous poacher. Slaght works with a rotating cast including Sergey Surmach of the Federal Scientific Center of the East Asian Terrestrial Biodiversity and Sergey Avedeuk of the Amur-Ussuri Center for Avian Diversity (love the names). They set out using snowmobiles and a massive ex-military four-wheel truck into areas where roads don’t exist and a Western scientist is a sight rarer than the owl.  Here in Russia’s Primorsky Krai (Maritime Territory), they also face dangers from the land itself: fires in summer and freezing in the infamous Russian winters.  They have many failures before devising a trap that works for the wily birds. Equipment fails in the harsh conditions, and Slaght describes their efforts to fashion fixes or alternatives.

He writes, too, of the emotional heights and valleys inherent in chasing something that may be vanishing. Slaght is an excellent writer, and people, owls, and the terrain all come alive in his words.

Much of the owl habitat is being logged, and regulations and enforcement are spotty in this remote area. Deciding that a large wildlife preserve is politically difficult and would affect many people’s livelihoods, Slaght focuses instead on pinpointing the owls’ locations and habitat needs to pursue more focused protection. He negotiates with companies and officials about leaving certain trees and areas alone, and scores some successes. At the end of the book, he is cautiously optimistic.  Slaght, a man who puts his life where his heart is, continues his work today with the Wildlife Conservation Society’s Russia program.

Field work is often regular repetition of challenging or unpleasant activities, an application of persistent pressure to a question until the answer finally emerges. – John Slaght, Owls of the Eastern Ice

Posted by Matt Bille at 9:36 PM No comments:

Reaching way back in the bookshelf for this one.

AnimalTreasure: A Naturalist in Search of Strange Creatures

The first book by Sanderson, who went on to become an important and controversial figure in zoology and cryptozoology, is a delight for animal lovers of all sorts. Sanderson was part of the generation of Western zoologists that finally abandoned the “collect everything you can shoot” mentality to study animals in situ. This book followed his first major expedition to British Cameroon (now split between Nigeria and Cameroon). Everything here fascinates Sanderson: he pays as much attention to ants as to antelopes. In vivid language, he recounts adventures from being trapped and lost in a cave of bats to trying to befriend a troop of baboons.  The animals pop off the page as if still alive. 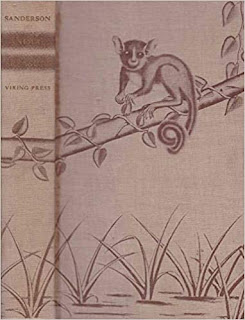 His writing shows some 1930s condescension of Westerners toward the indigenous tribes, although he never says they aren’t his equals as people (in another book, he refers to an African elder as the wisest man he ever met.)

Two wildlife incidents are especially memorable. On one occasion, men who wanted to show Sanderson they were better fishermen than a rival tribe dragged ashore a stingray over 11 feet (3.4 m) long. Sanderson had no idea such giants lived in African rivers. This is also Sanderson’s initial account of a giant black bat that swooped toward him at head level. He describes it here as the size of an eagle. [He wrote much later that he and fellow witness Gerald Russell later compared their diaries and agreed it was 12 feet (3.6 m) across.]  He closes by saying he was sorrowed by the destruction of the forest, a thought rare in 1937.

Sanderson became one of the first TV nature series hosts and wrote many more books.

Posted by Matt Bille at 4:45 PM No comments: