Thanks to the PPWC Staff and Guests

The Pikes Peak Writers Conference is in the books, as they say, and I'm prepaid for next year (as always).  We had a great time with new friends, old friends, and guest faculty. The speakers were all excellent. As for personal high points, well, three publishers asked to see the manuscript of my current novel, Apex Predator, and two agents are looking at queries.  Not bad.  Onwards! 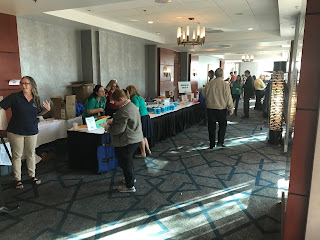 Lake Iliamna, Alaska, is the size of Rhode Island and at least 250 meters deep.  It has the largest salmon run in the world, is still so isolated no roads lead to it, and has seven times the volume of Loch Ness.  It would be surprising if such a lake did not have "monster" stories surrounding it, originally told by the Alaska Natives (Tlingit, Dena'ina, Yup'ik, and others) who have lived there for centuries beyond count.  What's interesting is that its legend is unique. Iliamna (despite one fakey YouTube "monster" video) is not claimed to have the plesiosaur-like monsters of other lakes, but a colossal fish.   It's probable this legend (well fortified by modern sightings) concerns an undocumented population of white sturgeon, but it's impossible for us romantic natural history types to avoid speculating on what else it might be.

For details, see this article by yours truly. 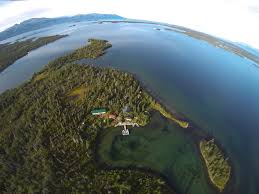 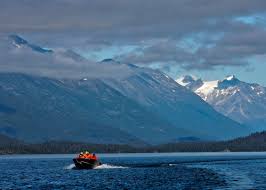 Images of Lake Iliamna taken by University of Washington scientists 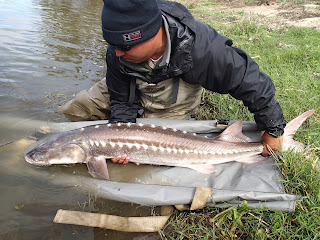 The white sturgeon (a baby: they approach 4 meters long and maybe even 5). US FWS photo 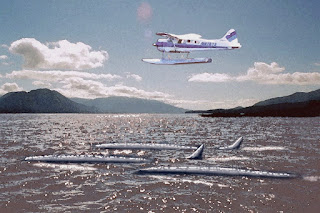 Posted by Matt Bille at 2:27 PM No comments:

OK, Jim Butcher had to cancel, but a great cast of editors, agents and speakers are here. I'll put away my Harry Dresden duster and staff until Denver ComiCon. If you're in Colorado Springs, PPWC is THE annual event! 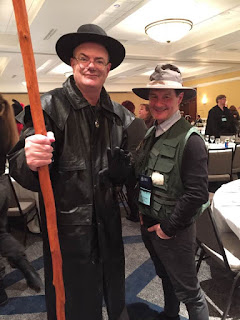 Dropping in on the Space Symposium

The Space Symposium (formerly the National Space Symposium) comes to Colorado Springs every April. The gathering, arranged by the nonprofit Space Foundation, has become enormous, filling all available space (hah-hah) at the extensive (and expensive) Broadmoor hotel/resort/convention  facility on the city's southwest corner. The 34th Symposium brought VP Mike Pence, who talked about the Administration's commitment to human spaceflight and to a bigger role for commercial firms. It brought in space leaders, public and private, from all over the world, and a galaxy of generals, who talked in frank (VERY frank) terms about their views on the perceived need to prepare to defend space assets and access in a realm that was no longer a sanctuary.
I wasn't there the first day, but on the second and fourth days (when I visited the Exhibit Hall a lot: attendance to the main sessions is pricey) I saw zero protesters, which was odd. The  groups nervous about increased military presence in space group (whose concerns I understand but whose targeted train may have left the station already) is a fixture. There's usually a dedicated handful of die-hards sticking it out the whole way through, sometimes with a guitar-bearer doing 1960s and 1970s protest songs. (Side note: My dad, who is in his 80s but has never stopped singing Pete Seeger-style music in Seattle, feels no one has written a really good protest song since the 70s.)  Acting NASA Administrator Robert Lightfoot, who will FINALLY be replaced with President Trump's choice after a one-vote Senate confirmation, was there of course.
The person most prominently NOT there was SpaceX's Elon Musk.  Indeed, SpaceX had no exhibit space, no meeting rooms, nothing.  That is, in a sense, the kind of prominence SpaceX has achieved: if you want to talk, you go to them.  We can't all be Tony Stark and run into him in a restaurant. I wonder if Musk feels he can't really be productive at these things because his celebrity status warps the time and space around him to create his own gravity field, the way Stan Lee (alas, it seems, no more traveling) did at a ComiCon.
The exhibit space was stuffed with everyone else, though, from giants like Boeing and Lockheed Martin to startups, some of them just making a better cable or release bolt and some with eye-opening stories, like small-booster makers Rocket Lab and Firefly and Earth-i's newest video observation microsatellites.
It was an eventful, event-filled symposium, and next year is already being organized. See y'all then. 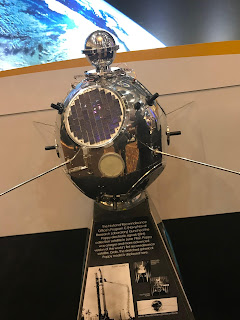 The Naval Research Laboratory showed off their Poppy electronic intelligence microsatellite from the early 1960s. This was a classified program for decades, and this is the first time I've ever seen one. 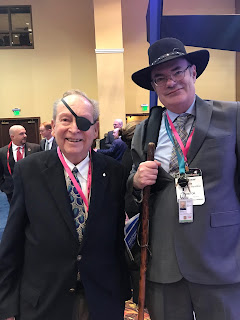 Gil Moore, still going strong at 90, was on the Viking booster and Vanguard satellite programs in the 1950s and continues his work on the student built Project Starshine.
\ 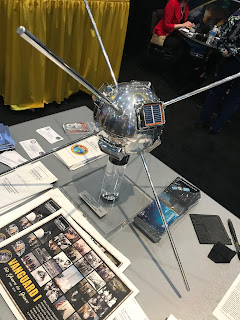 The Vanguard satellite, launched in 1958 (the original remains in orbit). Its contribution to the larger Poppy satellite above is obvious.

Well, the trailer is out for The Meg, and I'm not sure what to think.  The summer blockbuster-to-be from Steve Alten's novel could be a fun monster movie, like King Kong, or it could be a suspenseful undersea adventure movie, like the Abyss, but the American trailer (I've heard there's another for Europe that emphasizes the suspense side) looks like it's trying to get both audiences, which is very hard to do well.  (The original Jurassic Park hit the sweet spot of suspense and fun, as did Jackson's Kong: the recent American Godzilla was visually amazing but didn't quite get either side right.)  We don't see any discussion of the science in the trailer, but that's okay: no one went to Kong expecting scientific explanations, and indeed not a word was said about it on screen.

What I like:
They gave up on the movie's glowing albino shark (even if that's possible, it says to prey "here I come!") and basically did a giant great white shark, which is fine: no one knows exactly what Meg looked like, thanks to the very limited fossilization of any cartilage-based skeleton.
There's a giant squid in it.
The underwater lab and submersibles look cool.
The trench ecosystem, possible or not, looks cool.
The Shark Week joke.

What I don't:
The shark looks different sizes in different shots.  This problem plagues giant-creature movies going all the way back to the original King Kong, but Peter Jackson's Kong shows you can do it right. (Maybe they couldn't get Andy Serkis to play the shark.)
Statham/Jonas (again, just from one trailer: he might be much better in the film) looks tough but  humorless and not very interesting.
I don't think the ecosystem shown at great depths is possible, or that the shark could survive the trip to surface waters.  To be fair, both these things have to be assumed: there's no other way to make the story work.
I hate Beyond the Sea.

We'll see if the movie hits the spot or jumps the megalodon (I wanted to be the first to use that line.)

The shark-eating mosasaur in the film Jurassic World, while accurate in some particulars (like the shape of its teeth) was ridiculously oversized.  It was supposedly about 15 short tons in weight, or the size of two average T. rex adults (discussion here), but that seems very inadequate for the size of the thing shown in the film, which I'd guess was well over 30 meters (m) (100 feet) long.  A blue whale that size would likely be pushing 150 metric tons (mt). The biggest mosasaurs known were about 18m (huge!) but not like that.
Anyway, National Geographic News reports we have a new contender for biggest fossil marine reptiles.  It is one of the icthyosaurs, which look like a bit like obese giant dolphins with an extra pair of flippers toward the rear. The newest fossil jaw, from Somerset in the United Kingdom, compared to the jawbones of more complete icthyosaur specimens, indicates an animal of just under 26m (85 feet)!
Dr. Darren Naish, a paleobiologist I know who is quoted in the article, is a cautious man when it comes to claims of gigantic prehistoric beasts: he has argued strongly that estimates of 27m for the giant fish Leedsichthys and 18m+ for the pliosaur called the"monster of Aramberri," are enormously overstated.  However, he agrees the estimate for this titanic icthyosaur looks correct based on the jawbone, which is nearly a meter long. (Darren knows icthyosaurs: for one of his related posts, see here.)
If the article writer is a little overenthusiastic in comparing the animal to a blue whale (a blue whale over 33m long is on record) it is nevertheless an awe-inducing creature. The new species (unnamed at present) was apparently larger than the biggest predator now living anywhere, the sperm whale.
So that will do fine as a monster.

Sitting down with a student of cryptozoology

Colin Schneider, an avid young cryptozoological researcher also known as "Crypto-Kid," will get this science writer's take on his topics in a live interview 8PM EST Monday.
https://www.wcjvradio.com/broadcast-schedule.html

Thanks for a great interview. It's archived on the wcjv site. We reviewed cryptozoology in general and two of Colin's favorite subjects, bears (we probably have all the species, although Asia is a little muddled) and cetaceans (we almost certainly don't have all the species.)
Posted by Matt Bille at 2:28 PM No comments: