Charles William Beebe was most famous for his pioneering descents in a bathyscaphe (his best known book is called Half Mile Down)  but he had a very long career as a writer, naturalist, and conservationist as well as an explorer. He was born in 1877, at the end of the great age of naturalist explorers, and lived to see the first humans orbit the Earth.  A few of his thoughts:

Beebe has a somewhat controversial record as an observer of marine life in the deeps, having reported several fishes, some of them spectacular, no one else has been able to find.  His greatness as an explorer and his impact as a scientist, though, will live on forever.
Posted by Matt Bille at 5:07 PM 2 comments:

Jay Barbree, one of the first radio reporters to focus on space and a correspondent on that medium as well as TV for 50 years, had a front-row seat to much of the American program.  It's a fun read, but I wanted to like it more than I did.
Despite the book's adequate length, it feels like the reader is on a rushed tour bus, hitting the highlights with some pauses for personal interludes.  Barbree came to know almost everyone in the space program, and he offers interesting anecdotes involving the astronauts in particular.  He humanizes these larger-then-life figures well, although almost nothing is said of their families.  He offers some poignant moments preceding and surrounding the Apollo 1 and Challenger disasters.
Barbree comes across (it is, of course, his book) as a guy you'd like to sit down with and just talk, maybe for days. He clearly admires space exploration in general and the astronauts in particular. The reader can share his disappointment in fighting hard for the first "Journalist in Space" slot only to have the project canceled, and his account of his own heart attack and near-death is harrowing.
There are just too many inconsistencies and omissions in here to make the book a great one. Barbree messes up the the nomenclature of Soviet launch vehicles. He tells the Skylab program story in two paragraphs, never once mentioning the near-disaster and superb salvage efforts involved. (Granted, this book is not meant as an exhaustive history, but here was a great achievement Barbree helped cover, by men he thought of as heroes, and not a word gets in.)
Barbree condenses John F. Kennedy's decision to commit to Apollo into three lines of dialogue in one meeting, when it was an extensive process that involved non-space options like ocean desalination as national objectives as well as the two main space options (Moon or space station).  Weirdly, he re-creates a conversation where he (Barbree) says, years before the  decision was made, that Armstrong was "destined" to be the first astronaut on the Moon. He credits Reagan's SDI with ending the Cold War by bankrupting the USSR: I agree in part, but it was infinitely more complex than that, and no single cause dominates all the others.   There are no footnotes or references: Barbree of course had his own material built up over decades, but as his version of events (like those leading up to Apollo 1) sometimes conflicts with other sources, I'd like to know which broadcasts of his own, which NASA documents, which interviews, etc. supported important points.
I grew up watching the Apollo launches from our home in Florida, and I was excited as any kid could be. Barbree, at that point a veteran with many years of reporting under his belt, clearly had, and kept, the same kind of fascination.  His account of covering the space program is valuable, but it could have been better.

Dr. Stephen Hawking has passed. His was a mind that transcended Earthly limits to probe the universe, theorize how it came to be, and make it all at least somewhat understandable to the rest of us. He is probably right now saying to God, “I know you think that’s how you created the universe, but the mathematics are incorrect, so you must have done it this way.” If he was not the infallible giant that myth and The Big Bang Theory made him out to be, nor perfect as a human being, he was nonetheless inspirational, a man who showed the world what a great mind can do regardless of a failing body. Ad Astra, Doc.
Posted by Matt Bille at 9:29 AM No comments:

I have the new CollectA Dunkleosteus terrelli, and it’s marvelous.
First, disclosure: CollectA sent me one to review. They must have thought I’d like it, and I do.  It became my favorite model Dunk the minute I took it out of the box. It bears notice that the company is making the Dunk a centerpiece: it’s on the covers of the catalogs they included and even on a tote bag.
It’s the biggest of the commercial models, except for that odd Chinese foam knockoff of the Schleich dunk, and it’s hefty and solid. The jaw moves, and the anatomical details, even the speculative ones, all look right.
I thought from early photos there was sort of a hump on the back, but “in person,” the model looks much more streamlined. CollectA’s Peter Leung explained, “The hump (which isn't supposed to be anything of the sort) is simply the result of having the bony skull embedded in the body of the Dunkleosteus, rather than to just have it resting on the surface of the fish like a suit of armour as other firms have done.”  In that respect it’s a bit like the much smaller Safari Dunk, the most streamlined of the bunch.  The head shape, too, is more streamlined, not as blocky as in some models, and the effect is of a powerful but hydrodynamically efficient predator. The sclerotic rings are in the eye sockets, not protruding. The joints in the armor are visible, but don’t have much effect on water flow. The fins are rounded, and they too look right, as does the asymmetrical tail with a large lower lobe.  (It may not be correct, as there was a recent paper arguing for a sharklike tail, but it LOOKS right as a natural part of the creature.)  There are lines of bumps I originally took for scutes, but Leung wrote to me, "As the skull is the only thing preserved in the fossil record the rest of the animal is pure speculation as any artist or modeller has to do. No one for instance is certain on how the tail may have looked.  One has to look at contemporary and modern species and also think what will make the model attractive both visually and touch-wise. The skin ornamentations are not scutes but I based them on the skin of the Devonian fossil fish Gemuendina and other skin decoration on those of large modern fishes such as the Wolf Fish.”
In my estimation, this is about as good as a model can get without seeing the real thing. Comparing it to my other Dunks, this one is not quite as terrifying as Jeff Johnson’s fierce-looking resin kit and not as weird as the Schleich dunk. It’s a little more rounded than the shark-tailed Favorite model (whose artist we know also did a lot of research) and has much, MUCH more surface detail than any other vinyl model.    Speculation and all, this is an amazing job. 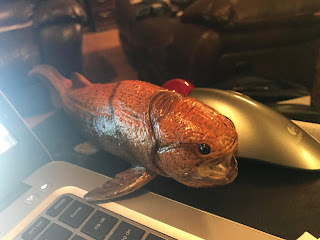 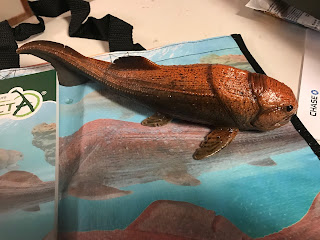 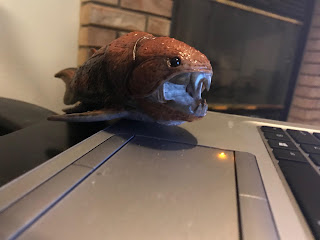 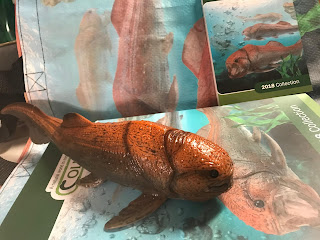