More and more missions for microsats

Some people still say microsatellites (under 100kg) and nanosatellites (under 10kg to some people, 1kg to some) have no operational missions. I'm not sure how that view endures in the modern era. Sure, the uses were limited into the 1980s or so, but then electronics got orders of magnitude smaller and missions and capabilities expanded. In the new century, they exploded.We have globe-girlding miscrosat missions for messaging (Orbcomm), for imagery (Planet) and a horde of demonstration missions showing other applications. Many of these come from small manufacturers and/or universities, not traditional space programs.  The latest is tracking aircraft . The CAN=X nanosat, mass only 3.5kg, carried the  Automatic Dependent Surveillance – Broadcast (ADS-B) to receive signals from aircraft transponders.  Director Robert Zee at Space Flight Laboratory at the University of Toronto reports, “The ADS-B instrument on CanX-7 has received and decoded 3.6 million signals from aircraft in less than six months. This mission proves that global real-time aircraft tracking can be achieved with a low-cost, responsive constellation of small satellites.”
One small step at a time...
Posted by Matt Bille at 3:06 PM No comments:

The winner of the primate hide and seek competition (if you don't count Bigfoot) may be the bald-faced Vanzolini saki.  This large, long-tailed monkey was  collected and named in 1936 in Columbia, then vanished in a puff of leaves and was never seen again.

An expedition led by Dr. Laura Marsh spotted the animal swinging in the trees beside the Eiru River. The habitat is in pretty good shape, but like virtually all primate habitat, requires intelligent protection from illegal logging, hunting, and deforestation to preserve the saki and its co-inhabitants.
Nice to get a win for conservation!
Posted by Matt Bille at 11:20 AM No comments:

Octopuses, we know, eat shrimp. So what was going on when a new species of shrimp was found living in the den of a common octopus (Octopus vulgaris)? In False Bay, South Africa, local divers, a filmmaker, and a scientist collaborated to find three new shrimp species, but the first was the most interesting. In addition to dwelling with the octopus and, for some reason, not being devoured,
Also of note: the scientist involved, Charles Griffiths, is no newcomer to new species, He has, in fact, described over 100!  Leave some for the rest of us, Charles... 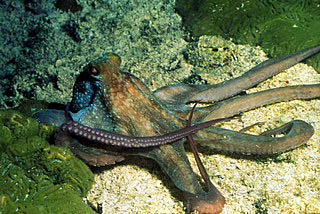 Don't use words too big for the subject. Don't say 'infinitely' when you mean 'very'; otherwise you'll have no word left when you want to talk about something really infinite.

Even in literature and art, no man who bothers about originality will ever be original: whereas if you simply try to tell the truth (without caring twopence how often it has been told before) you will, nine times out of ten, become original without ever having noticed it.

John Irving:
The way you define yourself as a writer is that you write every time you have a free minute. If you didn't behave that way you would never do anything.

Looking towards space in the new Administration

The Trump administration requested $19.092B for NASA in FY18, essentially the same amount the agency has in FY17.  The relevant House and Senate committees have approved significantly higher amounts.  (About $19.5B in the Senate and over $19.8B in the House.)   The issue has yet to go to a conference committee.
One of the bones of contention is science, which includes Earth science, which includes climate monitoring and climate change research.  With this issue a political hot potato, The Predient and GOP Congressional leaders generally want a reduction in the science budget, but amounts vary enormously, as does controlling language about how the money can be spent.
The Administration is very much in favor of increased private participation and increased human spaceflight funding.  The President at one point promised "American boots on Mars" during his second term.  This probably is not doable even if the budget was unlimited, which it most certainly will not be. The Space Launch System and the Orion capsule which would be part of such a mission have not even flown.
The other touchy topic is NASA's Office of Education.  The President requested only $37M for Education - just enough to shut down the office and most educational programs.  While NASA education programs do include materials explaining and warning of climate change, the complete elimination of the office took NASA-watchers by surprise.  Congress has put its collective foot down to block this move: the House wants $100M for education in the new year.
Some of this confusion exists because it's not clear who will run the agency or how oversight will work.  The revised National Space Council (a good idea) has yet to meet, or to schedule a meeting: the Administration has not yet named its NASA Administrator.  The President presented himself as a big fan of space exploration, especially human  spaceflight, so it's quite puzzling the Administration has not even tried to fill the Administrator post.
On the positive side, the agency can rest assured it will not take an overall cut and will continue the Office of Education.  On other matters, though, the space telescope image is rather murky.  Here's hoping the officials involved get that straightened out and give the Agency a course to set.