Headlines and out things that did NOT happen or were NOT real in 2017: fake news included disproof of climate change, disproof of vaccine effectiveness, proof tumeric prevented dementia, proof of false data about sea level rise, etc., etc.  Snopes has collected a Top 10 of misleading headlines related to science and medicine. (Onions in your socks cure nothing: you knew that, of course, but millions pf people bought that ridiculous advice.)
Snopes also collected the most popular false/debunked conspiracy theories (or at least unproven ones) in circulation and provided a collection of false or mis-attributed photos.
Posted by Matt Bille at 10:38 PM No comments:

A poem for the New Year

Posted by Matt Bille at 9:02 PM No comments:

The white whales (and dolphins)

Ahab and company may have chased the white whale only in epic fiction, but white whales exist. Moby Dick (who was NOT all white, he was sort of marbled with a white hump)  was named for a real-life counterpart, Mocha Dick. National Geographic has printed photos of a solid-white sperm whale.
Albinistic, leucistic, and partial varieties of both pop up in many species. Easily the most famous is Australia's white humpback Migaloo, a draw for locals and tourists every time he appears. Of course, he has a website.  An all-white calf, sometimes nicknamed Migaloo Junior although not related, is also known to be living.
Several white cetaceans, most famously a dolphin named Carolina Snowball, have been kept in captivity. Snowball's story, recounted here, was not a happy one: pursued by an expedition intended solely to capture her, netted along with her baby, she was caught in 1962 and died three years later after drawing big crowds but refusing to learn tricks.
Marine biologist Kate Redman posted the link to this item, on white harbor porpoises and oddly colored common dolphins.
This is just a fraction of the examples in recent literature. An all white-cetacean can do quite well in the wild (witness of course the beluga, an entire species of mono-colored animals).  Now that more and more nations are banning the capture of wild cetaceans, we hopefully will not see a repeat of the Snowball affair. 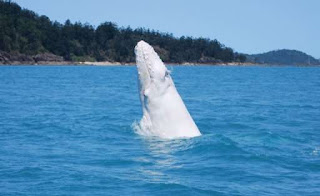 Migaloo (posted on phys.org with no copyright statement)
Posted by Matt Bille at 8:15 PM No comments:

Anniversary: the strangest of "sea serpents"