Wonderful Novel with a Tinge of Cryptozoology

This is a magical novel, weaving fact and fiction together to set the scene for one troubled American wife's World War II venture to Scotland with her despicable husband.  The people, the lake, and the maybe-there monster are all lovingly depicted along with the times.  If it's a half-notch below Water for Elephants (one of my favorites among all modern novels), It is nevertheless superb in every way. I know a lot of the monster-related history, and Gruen uses much of it, tweaking it occasionally to suit her narrative (as when the allegedly hoaxed "Surgeon's photograph" become a real hoax created by the protagonist's father in law).Gruen  puts us firmly, flawlessly into the time and place and explores life through the eyes of Madeline Hyde, a would-be independent woman in a very constricted life.  She's never preachy about the oppression of women in those days (which, among the upper crust, included lobotomies when necessary to keep them in line): she lets her points flow honestly from her characters' experiences and emotions. This is a wonderful book, and I look forward to the next one. 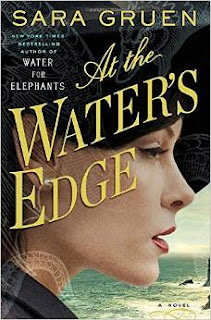 OK,  I went to Jurassic World.

I understand why some paleontologists despise it - it wouldn't have hurt the movie to make the dinosaurs more in line with the latest scientific discoveries, and they should have taken the opportunity to make the dinos more accurate (which also would make them more visually interesting). In fact, the raptors are LESS accurate than in the last movie, and it's disappointing. (And, why, in the name of Roy Chapman Andrews, do we keep seeing them with cute little "bunny hands"?) And how can pterosaurs lift way more than their own weight? And why does the mosasaur look different sized in every shot, and why is it bigger than a blue whale to start with?   And so on...

Nevertheless, this is a terrifically enjoyable monster movie, with the right balance of scary and funny moments. One death is drawn-out and gratuitous, but the rest of the violence is ok. The actors generally give good performances in the usual monster-movie stereotype roles. There are enjoyable nods to the original Jurassic Park, and there's a climax where my all-time favorite dinosaur gets on the screen again. The last joke, played out as people evacuate the control room, is a hilarious skewering of a common movie trope: I won't spoil it for you. There was a lot of predictability in the script, but the filmmakers did a decent job of hiding it.  (You knew the sinister defense guy was going to die, but they made you wait for it.)  And most of the ideas about what would actually be in a theme park of this sort, and how it would be marketed and run, seem pretty spot-on.

(Missed opportunity: a TV network should have had the older Ian Malcolm commenting on why you didn't need chaos theory to predict that a plan that twice ended in disaster was going to end, once again, in disaster. "They've removed the chaos. It's back to old-fashioned linear mathematical certainty.")

No, I don't believe in the super-powered Indominus rex.  You don't get significant additive (that is, positive or enhancing)  characteristics of another species as a random side effect of splicing in some genes for some other reason.  That we MIGHT be able to someday design something like this - and I think we might - is a scary thought, though, and it works great in the movie. And the discussion over the creature's name is funny and entirely plausible.

The CGI (save for a couple of moments) is good, and if the mosasaur is insanely big and some of the dinosaur behavior makes no sense, well, I'm willing to forgive the filmmakers most of their faults, because they created great entertainment. Turn off your brain, grab your popcorn, and enjoy the action.
Posted by Matt Bille at 4:55 PM 4 comments:

I don't know why I keep returning to this stuff, but: 1. The US Government has no contact with aliens. Such an event would become the central fact driving US space, defense, and intelligence budgets. It's not mentioned once in the massive leaks. Case closed. 2. There are no simple natural cures for cancer or other killer diseases. Arguing otherwise means that doctors and pharma CEOs are letting their own cancer-afflicted families die horribly rather than admit to simple cures and diminish drug profits. Case closed. 3. Vaccines are effective. The modern victories against diseases like polio are aided but not caused by improved sanitation, etc, because vaccines stop these diseases even in nations where the poverty and sanitation remain terrible. Case closed.

Now back to space exploration, zoology, and stuff.
Posted by Matt Bille at 4:42 PM No comments:

This is kind of incredible, in the best way.  ESA's cometary lander put down on Comet 67P in November 2014.  It transmitted for two and a half days and went silent, its batteries run down, its body-mounted solar cells presumably shaded by terrain and unable to recharge it.  As the comet approached the Sun, though, solar energy (direct or reflected) on the cells increased enough to wake up the spunky little 100-kg spacecraft and prompt it to transmit an electronic "hello."  Indeed, it turns out the lander has considerable information in its memory queue and must have been actively gathering data at some point during the long silence.

Congratulations to the ESA team.  A space first - the landing of a probe on a comet - has become even more memorable.

Posted by Matt Bille at 3:14 PM No comments:

OK, it's not a great day for the oceans. They're in a lot of trouble.  But the situation is';t hopeless.
First, more people know about the challenges and difficulties plaguing the oceans and marine life with every passing year.  More people get active, even if it's just little things like writing some blog articles.
Second, our knowledge is increasing every year.  We find more species, learn more about them, figure out more about how they are integrated and how the food web works.
I don;t know whether the gains every year are more important than the losses, but there ARE gains. Science, hard work, and hope can keep the planet's lifeblood flowing.


In celebration, the top quotes from the planet’s leading marine scientist, “Her Deepness,” Sylvia Earle.

“If you think the ocean isn't important, imagine Earth without it. Mars comes to mind. No ocean, no life support system.”
“Ten percent of the big fish still remain. There are still some blue whales. There are still some krill in Antarctica. There are a few oysters in Chesapeake Bay. Half the coral reefs are still in pretty good shape, a jeweled belt around the middle of the planet. There's still time, but not a lot, to turn things around.”
“We need to respect the oceans and take care of them as if our lives depended on it. Because they do.“
“Far and away, the greatest threat to the ocean, and thus to ourselves, is ignorance. But we can do something about that.”
“Sharks are beautiful animals, and if you're lucky enough to see lots of them,  that means that you're in a healthy ocean. You should be afraid if you are in the ocean and don't see sharks.”
“I have lots of heroes: anyone and everyone who does whatever they can to leave the natural world better than they found it.”


“I've had the joy of spending thousands of hours under the sea. I wish I could take people along to see what I see, and to know what I know.”

Some skeptical reading on matters of health

I'm not sure why I've spent a lot of time reading way-out health claims and their rebuttals.  I have yet to find anything directly connected to my own health in arguments over vaccines, GMOs, and so many other things, and I have no medical background, so why do I bother?
I guess I am intrigued by controversy.  But the point to remember in a lot of these debates is that controversy exists only on the Web, or in the minds of a fraction of the population (or in a fraction of a percent of those medically educated in some way).
Take vaccines. They are the greatest advance in human health in the history of the world.  Antivax activists say they are only in favor of more information. The trouble is the information they cite is, to use a precise scientific term, crap.  Vaccines don't cause autism, which is present genetically in the womb. They don't cause much of anything they are accused of. There ARE people, very rarely, who have a strong allergic reaction to an ingredient in a vaccine, and in the US there's a vaccine injury legal system for precisely this.  The system does not exist for people given autism by vaccines because there aren't any.
Parent like to know a cause when their kids develop problems.  I'm a parent, and I still want to know why my daughter has lupus, and I may never know.  Parent want to know, not only for themselves, but because they genuinely want to help other parents avoid seeing the same (often heartbreaking) problems.  But correlation in time - whether it's your child showing symptoms of autism soon after a vaccination or a child who develops a gastrointestinal disease after eating a normal diet for some years - doesn't mean that what you see is caused by what you think it is.  That's why there is exactly one discredited / withdrawn / fraudulent study saying vaccines = autism outside the fringe-medicine press.  It's why there is one withdrawn / discredited French rat study linking GMOs to ANY health problem in ANY mammal.
Peer review is not a perfect tool, but it's the best we have. And think before you claim "conspiracy" - the claim really means that doctors and pharmaceutical execs let their own families, their own children, themselves all die rather than suggest "secret" natural cures. (Actually, another writer pointed out a contradiction here: leftist activists claim Big Pharma is hiding cures for cancer, but they also claim that simple natural substances cure cancer, so what would those Big Pharma cures be NEEDED for?)
So ignore sites like naturalnews.com, which is neither natural nor news.  Eat a healthy diet, which does matter. Exercise.  And when something goes wrong, remember that one doctor may be wrong about it, but it's pretty unlikely that they all are.  Don't listen to people like the one described here.  Read real medicine and science by people with real expertise (like this blogger here ) and real medical organizations, like here, and real journals, like you'll find here, and accept - as bad as it is - that we simply don't have cures for anything yet.
But hope.  There's a lot of hope.  Keep funding real science and real medicine, and every decade, we'll say goodbye to another "incurable" malady.  The future is bright. It's just not perfect.