Books and Writers and stuff

If you want to write, or if you already write but want to get better, or if you just want to have a great time with other writers - Pikes Peak Writers Conference is the place.  It offers workshops, panels, speakers, and classes for every type of writing.  Don't miss it next year.

I had a great time there talking to Seanan McGuire, writer of urban fantasy and the InCryptid novels.   (I had a model Dunkleosteus with me: she immediately recognized it and loved it so much she posed for pictures.)

Reading Midnight Blue Light Special, one of the InCryptid line. The Price/Healy family is charged with keeping cryptids, many of whom are shape-shifters living in inhabited areas, from the public eye and from the hunters of the Covenant of St. George. Cryptids in this book include pretty much all the animals of cryptozoology (the hero rents her apartment from a sasquatch) plus several from fairy tales and some original species of her own, so it's not cryptozoology in the sense of focusing on real or necessary plausible animals, but she's clearly read the literature and includes cryptids from around the world and tosses off lines like, " If wishes were horses, we'd have an easier time feeding the chupacabras." It's a wild, funny, and original series. I recommend it!


I read Steve Alten's reissued Meg, in a special edition bundled with the prequel Meg: Origins. It's not often an author gets the chance to go back and rework the introduction to his world. He adds a pretty good prequel, fixes a couple of things that were eyebrow-raising the first time around (Meg v. a wading T. rex is now a simulation), and gives one of his better characters, Terry Tanaka, more to do. (The swipe at Richard Ellis seems petty, though: Richard savaged the science in the original Meg, and so did I: Alten has fixed some aspects of that as well.) The book still doesn't rise to the level of his best cryptozoological work, The Loch, and his SF novel Sharkman (Sharkman's science is iffy, but well within the allowable "reach " for a SF tale, and I gave it a top review for its superb characterization), but Origins should win some new fans for his universe of big-toothed predators.

I meant that about the Writers Conference. I'm already signed up for 2016!

Earth Day, a Pulitzer, and a planet full of species

A lot has been happening on our little planet.  Some of it, despite the seriousness of our ecological predicament, is good news.   In fact, all of it's good news in some way.
First, we know we are in the middle of the sixth great extinction, but we need to make people more aware of it.  The people who hand out Pulitzer Prizes have given this awareness a big boost by picking, as this year's winner in Nonfiction, Elizabeth Kolbert's compelling, highly readable, and powerful book The Sixth Extinction: An Unnatural History.   I can't say enough about this book: Kolbert is authoritative, engaging, and memorable in her assessment of the science and her first-person reports on her trips to see the threats and the threatened species for herself. There have been five mass extinctions in known geological history, the most recent being the impact which ended the Mesozoic, and Kolbert documents the way human beings have brought about yet another mass extinction. Some of the extinctions are unwitting (early Native Americans certainly didn't intend to wipe out the mastodon) and some shockingly deliberate, as when a scrounger stomped on the last viable Great Auk egg ever to exist.  Kolbert recounts her own journeys, ranging from the depressing to the amusing, to pull us in and give the science a human dimension, but she never lets herself overpower the story.  Rarely has an author provided us with such a compelling account of an ongoing crisis which demands global action before we lose yet more irreplaceable creatures and their habitats. 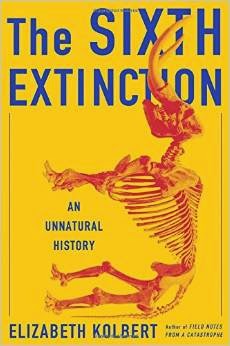 In the meantime, that good news I mentioned? We are  still finding new species, and every news article on such discoveries is one more little ray of hope (and prod to action). We have a new frog from Costa Rica, Hyalinobatrachium dianae, that, despite being less than 3cm long, looks startlingly like the beloved muppet Kermit.   We have new action on protecting key habitat around the world - whether a habitat corridor in Suriname  to the world's largest marine reserve around Palmyra Atoll, Johnston Atoll, Wake Island, and other terrirories in the Pacific. In the latter case, a national monument created by President Bush in 2009 has been expanded five-fold via executive action by President Obama.  And we learned more about existing species that will make a difference in conservation planning, the most striking example being the fact that western Pacific gray whales migrate over 27,000 km and intermix with eastern gray whales.

Finally, science has restored Brontosaurus to its proper stature: the of iconic and beloved king of the plant-eating dinosaurs. If all's not right with the world, we are at least making some strides. 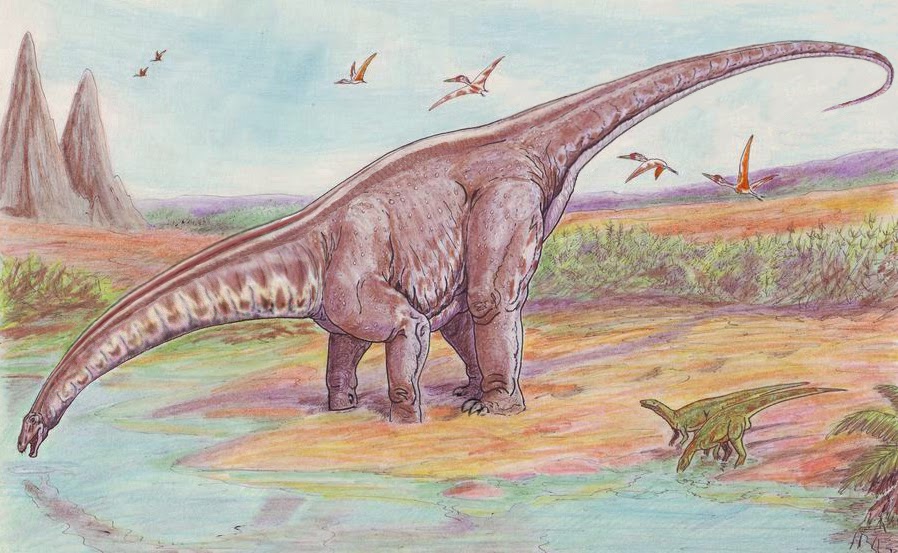 There are 22 known species of beaked whale (though not every one is accepted by every expert).  So what happens when scientists record calls that sound like a beaked whale - but don't match any known species? Well, they publish a paper like this one.  There is no certainty without more data, but we may well have detected a new species.

I sued to fish in Sebastian Inlet, just north of my hometown of Vero Beach.  Turns out this bobcat (a BIG bobcat: maybe they are growing larger without competition from the near-extinct Florida panther) decided to go fishing, too.  If someone said they'd seen a bobcat jump into the ocean to haul out a shark, I'm not sure I'd believe it, but the picture is here to prove it. (Not "here" as in this post - copyright law, you know - but in this news story.)

That was Stephen Jay Gould's title for an essay in which he argued that some things should be called just what they are called and a brontosaurus is a brontosaurus.  Well, everyone thought it was an apatosaurus, mislabeled.  Turns out it's not. 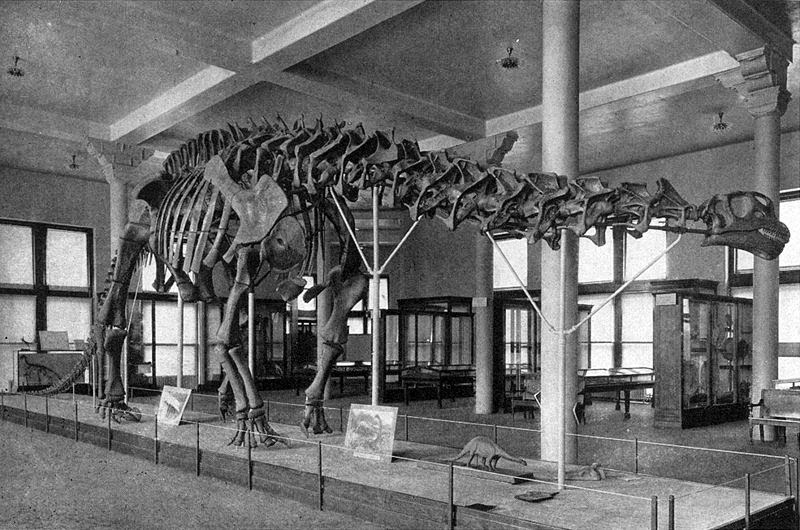 Classic AMNH brontosaur skeleton (with, somehow, the skull of a brachiosaur...)


Now we can get back to arguing whether Pluto should be called a planet.  (HINT: Yes)

Posted by Matt Bille at 9:00 AM No comments:

This is a great exhibit (currently at the Denver Museum ofNature and Science), created by AMNH, Field Museum, and others. It mixes real animals (life-size Gigantopithecus (biggest primate ever) and Aepyornis (elephant bird of Madagascar), mythical (European and Chinese dragons, a stunning model of Sinbad's roc as a giant golden-eagle looking bird, mermaids, Inuit and Japanese water spirits, among others) and cryptozoology. There's an interesting setup where you can "See a Serpent" by moving whales and dolphins through waves and getting the impression of a large single creature. The Denver Museum added mythic creatures of Colorado, with a jackalope, a fur-bearing trout, and other creatures. Bigfoot gets a surprisingly brief mention given his prominence among cryptozoological creatures.   There are short videos on animals of land and air (the land one includes anthropologist Adrienne Mayor talking about fossils and their interpretations as mythical creatures and comments by George Schaller). It's a terrific collection with a good exhibit store (none of MY books, though cryptozoology authors Loren Coleman and Ivan Sanderson get in, along with Mayor and some modern bestiaries.)  It’s in Denver through the summer! 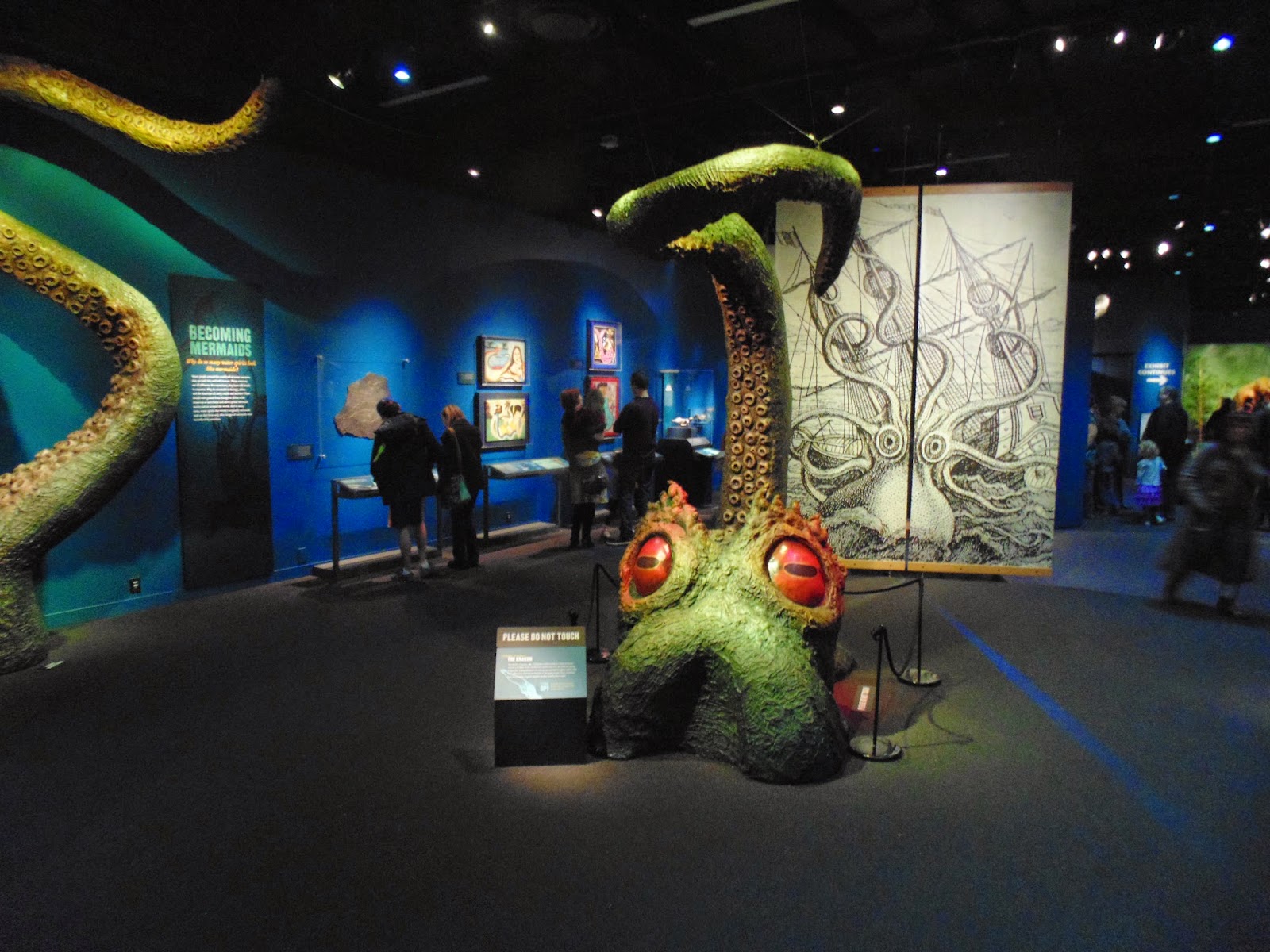 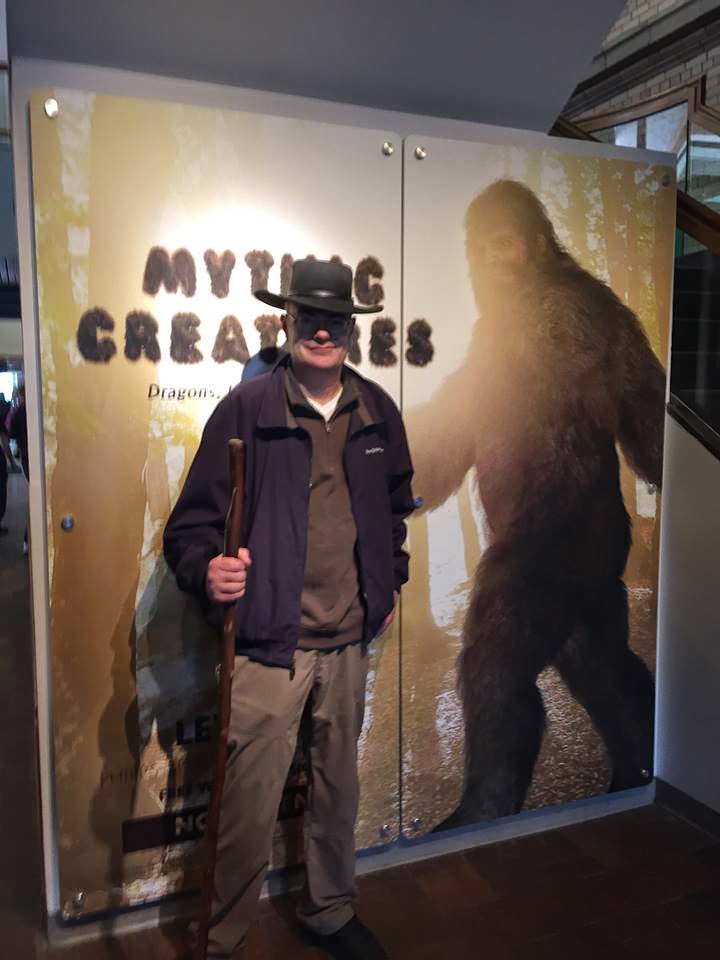 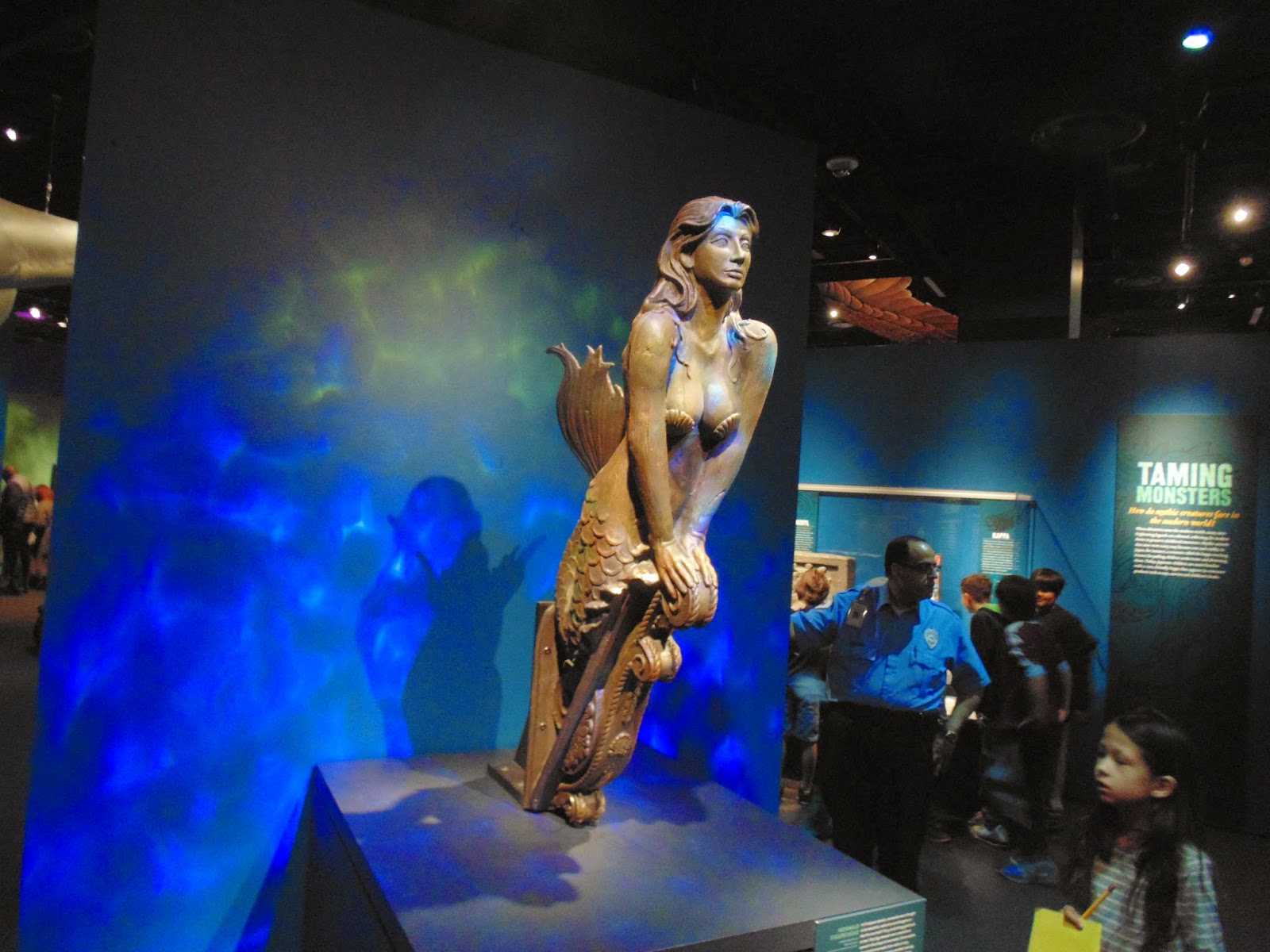 Posted by Matt Bille at 9:42 PM No comments: