In 2016, as I reported in this post, a beaked whale stranded on the cost of Alaska was determined to be a likely new species.  It now becomes the third whale formally described from its genus. Leading U.S. cetologist James G. Mead and several colleagues from Japan wrote the description.  Berardius minimus is distinguished from its cousins by "...remarkably smaller body size of physically mature individuals, proportionately shorter beak, darker body colour…"
Japanese whalers and fishermen knew of the smaller, darker beaked whalefor a long time and had their own name for it, “kuro-tsuchi." A specimen 6.2m was stranded in Hokkaido in 2012 but was misidentified as an existing species. Indeed, the scientists who wrote the description used "three individuals from Hokkaido and one additional individual from the United States National Museum of Natural History collection."
The whale's big leap into recognition began when a stranded specimen in Alaska's Prilobof Islands was seen by a biology teacher, who thought it was significant and called a seal researcher he knew, She in turn decided it was significant, not to mention odd, and called n a cetologist, and it went on from there, through the long, hard work of comparing it to identified and unidentified skeletal material and testing its DNA.   So this case is a good reminder that "collected" doesn't always mean "classified," and "identified as a new species" takes a while to become "described."
This makes 22 species in the enigmatic group known as the beaked whales, and no one can be sure we know them all. 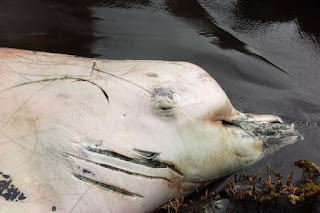 Photograph from 2016 by Karin Holser, who helped identify the species in the field: I believe this is educational / scientific "fair use." I emailed Holser about it but did not hear back. Note the specimen had been stranded long enough that its characteristic dark coloration has faded, although Mead et. al. note the color is not 100 percent distinguishing from Berardius bairdii, whose range it overlaps.

In the local newspaper, the Colorado Springs Gazette, a guest column appeared the other day from Barry Fagin, a Senior Fellow at the Independence Institute in Denver and a prominent skeptic.  He argued the "Bigfoot Crossing" sign on the Pikes Peak Highway is an embarrassment that makes us look like idiots and spreads pseudoscience.  Here's his column.
I see his point.  I've spent a lot of time looking into Bigfoot over the years, and I went into it at length in my second book on zoology/cryptozoology., Shadows of Existence. My judgment is that the species does not exist: we've gone too long without bones or other hard evidence, or even DNA.  And the non-existence of the fossil record for any higher primates in the Americas is pretty hard to get around.  I've talked to smart, sane, sober people who are certain they have seen Bigfoot. I don't know what they saw, but I still think mistakes are more likely than apes.  (Yes, I was trying for a rhyme there between "mistake" and "ape," but I can't make it work.)
Still, I would give the ape a break. Government agencies very rarely display a sense of humor, and I applaud it when they do. The sign warns people of a creature that likely isn't there, but I don't see the harm. There are "cryptid" signs and statues all over the country, some, like this one, on public property. Lake Champlain, to give just one example, has made a major tourist attraction of their local critter.  No one's trying to vote their selectmen, or whatever they have, out of office for supporting it, even if lake biologists are pretty much 100 percent on the side of "There ain't no such animal."  (In case you are curious, I once asked the local branch of Colorado Parks and Wildlife Agency whether they take Bigfoot reports (yes) and whether they do anything with them (no).
As to the scientific aspects, one can in fact make a science lesson out of an animal that isn't there. Getting students interested in working out the food supply and habitat needs of a hypothetical ape could interest those who might not get excited over Preble's jumping mouse and hopefully spark interest in conservation science.
So let the big guy have his sign. It's a bit of local color and kinda cool. 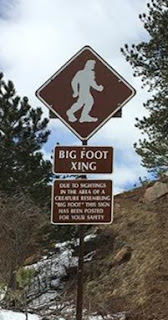 Posted by Matt Bille at 7:05 PM No comments:

Since I review every Dunkleosteus toy and model I can find, here's a toy from Japan, manufacturer uncertain, bought from a Hong King seller on eBay.  As a toy, it gets points for being rubber instead of plastic: as an accurate Dunk representation... well, it's toy. You don't expect a lot.  It's kind of cute despite the mouth. 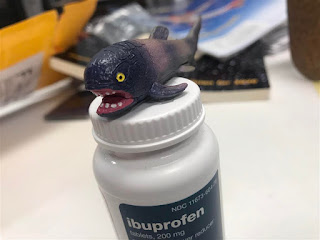 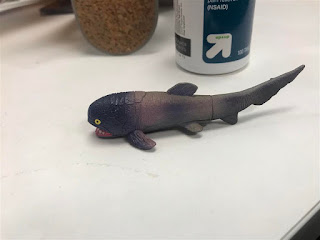 Small satellites and microsatellites (the spacecraft, not the genetic term) have moved into the mainstream.  After decades of being dismisses as toys or R&D vehicles, satellites under 500kg (small) and 100kg (micro) and 10kg (nano) are launching in the thousands. That's not an exaggeration. See this piece from Space News predicting 8,500 satellites in this decade.
Just from the Conference on Small Satellites this year, we have new on military CubeSats (1 kg cubes) remote sensing / geospatial data advances (trust me a small radar satellite resolving details under 1 meter in diameter is incredible), ups and downs in the launch industry (SpaceX is making more room for affordable secondary payloads on its large rockets, while small launch firm Vector seems to have gone belly-up).
I hate it when a smallsat launcher company fails, because the staffs are so full of enthusiasm and often work crazy hours for peanuts to try to reach space, but there are way too many competitors for the available launches right now (a couple of years from now, when even more smallsats are on orbit and start needing replacement, it may look quite different.) Vector has two ordered launches on the books, and I hope it can scrape through under new CEO John Garvey, a veteran of this chancy business.  Much depends on whether future birds and their replacements are put up singly or in small bunches vs. in wholesale lots from large rockets. Speakign of large rockets, NASA has opened up Cubesat slots on the second launch of their giant SLS booster.

There's a great deal of buzz in the smallsat world about the new Space Development Agency and its focus on multipurpose layers of smallsats (an interesting papaer prefiguring this notion is found here), while commercial firms like Planet and Spire launch nanosatellites that blanket the Earth to collect imagery, weather, and other information.

A space agency used to be a giant government organization. Now data-producing satellites can be built by high schoolers and launched for as little as $100K, and a student in Myanmar with an internet connection can download umpteen megabits of images and measurements. No one knows where all this is leading, but it's going to be exciting.
Posted by Matt Bille at 1:31 PM 1 comment:

Parrots the size of toddlers are weird to visualize.  Looking at images of this newly found extinct species is a little like seeing a Komodo dragon and not being able to process a lizard the size of an alligator.  Living in New Zealand 16 million years ago, the species dubbed Heracles inexpectatus stood a meter tall and weighed almost 7kg. The bird was probably ground-dwelling or perhaps a very limited flyer, but it was a beast to be reckoned with for other birds and ground-dwelling animals smaller than itself. One scientist observed, "This was Squawkzilla."
Posted by Matt Bille at 8:26 PM No comments:

It's a little odd to make a blog post just to point to someone else's review of someone else's book, but Dr. Darren Naish's very thorough review of an amazing book by Dr. Karl Shuker deserves it. Plus, I get mentioned.  Darren also noted something I'd been wondering about: a report from Brazil of a catfish that had taken to a land-based existence, mentioned in Shuker's earlier work and cited by me in Rumors of Existence. I know, it's all getting kind of circular, but the point I wanted to quote here was "The incredible semi-terrestrial catfish discovered in Manaus by Peter Henderson still has yet to be formally described..."  I believe it still hasn't.  A shame.

And here's my review of that.
(Please pardon some formatting problems, I'll be back to fix those.)

Building on two of Shuker's earlier works, The Lost Ark and The New Zoo,
the Encyclopedia  deserves its title. This is a mammoth collection of scientific
achievements from 1900 to the present.
It's information-packed, sumptuously illustrated, and just plain fun.
Shuker does not, of course, try to include all discoveries, since the
beetles alone would merit a  library. He goes for creatures which are
relatively large or scientifically important, and those are
more than sufficient to fill this large-format 368-page book. S
huker is a highly knowledgeable writer  (as you'd expect from a Ph.D.
who's been poking into the odd corners of zoology for four decades).
He discusses both species and important subspecies (including those
where there is some dispute  about taxonomy: it's not clear whether
Rothschild's giraffe is a subspecies, species, or just a local variation.)
The zoologically inclined reader will enjoy every page of this romp
through monk seals,  giant stick insects, megamouth sharks, monitor
lizards, and other discoveries simply too numerous to mention.
One thing Shuker does not do is set all the material into a context by
showing any species  discovery curves or discussing just how many
ew vs. known species are being found. He does,  though, amply
demonstrate his main theme: that discovery didn't end with the "golden
age"  of the 1800s - indeed, it's continued at a steady and often
surprising pace right up to the present day.

Being a Shuker work, this book has plenty of mysteries along with
the definite discoveries.  Some are well-known: some, like a slow loris
with a thick bushy tail, not yet recognized although  it's been held in captivity
and photographed, surprised even a well-read aficionado like myself.
Likewise, some of the stories of discovery, like the coelacanth's, have
been told many times  (though Shuker always tells them well), but how
many know the tragic tale behind the discovery of Flecker's sea wasp
jellyfish, or how Rudie Kuiter saw a flounder swimming along and discovered
it was the most amazing mimic in nature: an octopus pretending to be a
flounder? Shuker also includes stories of animals which didn't quite
live up to their hype as new species,  like Mexico's onza (not a new
species of big cat, just an odd puma.) He closes with a few words
on possible future discoveries, a note on taxonomy, and a bibliography
running 33 pages.There are hundreds of images here to go with the text,
ranging from photos to Bill Rebsamen's  wonderful color illustrations.
This is one of the classic books, not just of cryptozoology
but of modern zoology and  conservation biology. Readers will love it
enough to revisit it many times.
It's a great achievement.