The missing link in whale evolution

One large whale (the unique sperm whale) has teeth, and all the smaller whales and dolphins do. The rest, the mysticetes, ranging from medium-size to titanic, use baleen to strain out fish or crustaceans. When did the split from the early toothed ancestors occur? Now we know. This whale, 28 million years old, has a sieve made out of teeth, a huge and heretofore undocumented change in the cetacean lifestyle.  To my fellow Christians who think the world is young and the fossil record lacks transitional specimens, I would say you can't ask for a better transitional fossil than this one.
Posted by Matt Bille at 9:14 PM 1 comment:

Book Review; When Fish Got Feet

When Fish Got Feet, Sharks Got Teeth, and Bugs Began to Swarm: A Cartoon Prehistory of Life Long Before Dinosaurs
Paperback –  2009
by Hannah Bonner

This book offers a unique and delightful look at the Silurian and Devonian periods, suitable for school children but including some funny bits and cool facts that will help adults learn or recall the main events of this pivotal time in our planet's history.  It also is the only book I've seen for kids that provides some information on my favorite predator, Dunkleosteus, incidentally playing it conservative and assigning a length of 6m where some books say 8 and a few old ones say 10.  There are short, clear explanations of everything from the creation of soil to the adaptations needed for plants and animals to invade the dry land environment.  Recommended to my by no less than Matt Mossbrucker and Dr. Robert Bakker, this is just a terrific book: order one for your kid's library and another for yourself. 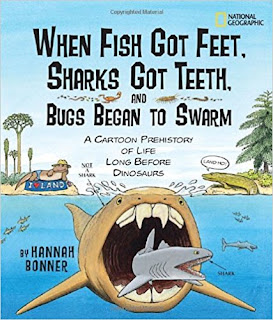 Posted by Matt Bille at 3:07 PM No comments:

New mammal species in North America are very rare - years can go by without finding a new rodent (they pretty much all are rodents these days.)  However, here's something a bit more spectacular - a new flying squirrel. Humboldt's flying squirrel is a bit smaller and darker than the close relative is used to be mistaken for.
Discovery never ends...
Posted by Matt Bille at 2:28 PM No comments:

Everyone is fascinated by the idea of "living fossils," which isn’t a precise scientific term but is a popular way to refer to animals which have survived unchanged while the evolving world passed them by.  I looked at a lot of these in Rumors of Existence, my first book, and they still interest me.
The coelacanth is the most famous: others include the tuatara, a lizardlike New Zealand reptile whose three eyes (the third is degenerate but functional) watched the dinosaurs come and go.
The term "living fossil" is not reserved for vertebrates.  Among the myriad specimens dredged up by the famous Galathea expedition in the early 1950s were ten limpet-like shelled animals.  They came from sea-bottom mud over 3,000, t beneath the surface off the Pacific coast of Costa Rica.    What were they?  No one was sure.  The new discoveries had pale yellow shells with an oval shape, about four cm long and one cm  high.  A large foot (colored pink and blue) was surrounded by five pairs of primitive gills.
While the shell and teeth said "mollusc," the gill regions showed a segmented construction resembling annelid worms.  Was the new animal either of these, or was it something entirely unique?  It most resembled a model that biologist Brooks Knight had created showing what the ancestor of today's molluscs might have looked like.  But that hypothetical animal - no actual fossil had ever been found -  was presumed to have died out 350 million years ago.  Neopilina  galathea filled an important gap in the evolutionary record.  Taxonomically, the little critter was literally placed in a class by itself.  Since then, more Neopilina species have been dredged from the depths.  The scientific detective work of finding more examples and determining their exact place in the parade of evolution goes on.

The great pioneering undersea vessel, the submersible Alvin (still working today!) pulled in one of its many notable discoveries in 1979.  Near a hydrothermal vent in the eastern Pacific, researchers on the sub collected a strange-looking stalked barnacle, the stalk serving to allow these normally fixed creatures some degree of mobility.  It had never been seen before, even as a fossil, but apparently belonged to a group which flourished before the dawn of the Age of Reptiles.
The waters off New Zealand produced a similar surprise in 1985.  Clinging to sunken logs a thousand meters below the surface was a round animal barely over a centimeter wide.  Named the sea daisy, it appeared to be a distant relative of the starfish, even though only vestiges of the classic five-pointed starfish design were apparent.  That was enough to put it into same phylum, the echinoderms, but it proved very difficult to classify this diminutive invertebrate more precisely. The sea daisy is spiny on top, and its underside is covered by a flat membrane that biologist Michael Bright compares to plastic wrap stretched over an upside-down saucer.  The sea daisy, too, was assigned its own class (now the infraclass Concenticloidea, in which it inhabits the order Peripodida. Two other speies have been added).  When it was discovered there was just nothing like it, except for fossils predating the dinosaurs.
Fossils from the same period included the graptolites, tiny colonial creatures who built homes of collagen secretions layered in strips like mummy bandages.  At one end of each 2.5cm-long long communal house, a peculiar sharp spike rose like a TV antenna.  Graptolites were presumed to be related to modern homebuilders called pterobranches, but pterobranch dwellings lacked the characteristic spike.
After an apparent absence of 300 million years, graptolites resurfaced.  In 1992, French researchers sent a sampling of seafloor specimens to Dr. Noel Dilly, a London ophthalmologist whose "hobby" of studying pterobranches grew on him until he became one of the leading experts on the animals.  Dilly's first reaction was, "Not another boring collection to hack through."  His second was, "I don't believe this."  He was looking at characteristic graptolite dwellings, spikes and all.
The graptolite is a reminder that not all animals evolve: some just find a comfortable ecological niche and settle down for a long stay.
There an awful lot of little creatures like this to be found.  In the mid-1980s, Frederick Grassle of Rutgers University led an effort to collect over two hundred core samples of the Atlantic seafloor.  When all the sediment had been sifted, the somewhat flabbergasted scientists found they had collected 460 new invertebrates.
The littlest animals offer many surprises, and no one thinks the surprises are over.

We can't ignore climate change - or our role

The President, as Presidents can do, withdrew from an executive agreement signed by his predecessor.  OK, that's legal. It does not make it wise.
In the Industrial Age, we have poured 600 billion tons of carbon products and compounds into the atmosphere.  Now, the atmosphere weighs about 5.5 quadrillion tons, so it's not like we've replaced the whole shebang, but chemical reactions are tricky things.  Just as you cannot ignore 25 µg of LSD in your 80kg body (it will probably kill you), you can't ignore 400 ppm of carbon compounds.  We haven't had that much in hundreds of years, and climate scientists are almost universal in their agreement this is enough to be really, really scary.  It's not that 400 is a magic number that tips us into a pit of no return.  But as one JPL expert. Dr. Michael Gunson, puts it, "Passing the 400 mark reminds me that we are on an inexorable march to 450 ppm and much higher levels. These were the targets for 'stabilization' suggested not too long ago. The world is quickening the rate of accumulation of CO2, and has shown no signs of slowing this down. It should be a psychological tripwire for everyone." As another NASA expert, Dr. David Crisp, says,  (400ppm) "brings home the fact that fossil fuel combustion, land use practices, and human activities have increased the CO2 concentration in Earth’s atmosphere by more the 20 percent since I was born."
It's not a conspiracy.  There has never, in human history, been a situation where 95 percent (or so) of scientists in a given field were all in on a conspiracy.  A large majority of scientists can be wrong (see: continental drift), and the self-correction mechanisms of science work a lot slower and clunkier than we would like, but we're talking about decades of near-consensus despite bringing online more and more accurate tools and measurements without budging the needle one bit on the "consensus-o-meter." We're talking about research that's gone on long enough that a new generation of climate scientists has come in since the early alarms were sounded, eager to find new things, and what they found was the same thing - only worse.
We have to act.  Yes, some of the hand-waving about the magic of renewables is wishful thinking: we cannot change the global economy easily or painlessly.  Any time you see a headline like "Germany Ran On 100 percent Renewables Today" it's always a result of cherry-picked data. The task ahead of us is orders of magnitude harder than putting up more windmills.  But we still have to address it.

One GOP Congressman said God will fix it. Le'ts talk about God for a minute. I believe in God, although I don't read the Old Testament literally.   God did do something: he gave us the brains to solve our problems if we muster the will.
Let's take Exodus. Whether you think the flight through the Red Sea is literally true or is a story written to emphasize God's love for His people, the lesson is that same.  If Moses was going to get everyone across that sea before it closed in on the Egyptians, he had the sense to hurry, to leave behind possessions, to help the old and slow keep up, and otherwise to get organized really fast under pressure and execute the plan he needed to execute. If God wields the power He displays in parting the sea, it must also be true that He could have reached down, made the escape route permanent, and crushed the Egyptian army so Moses could take his time. But God doesn't do that: He creates just enough of an opportunity that Moses and company could take advantage of it if they did all they could for themselves.  They did, and we can do no less. A common Christian precept is "God has no hands but ours." We are entrusted with the stewardship over the planet and our fellow creatures, and no one is going to save them if we don't.

The President is not entirely wrong when he says the U.S. is called on to do more sacrificing than most nations. We are. But that's because we have the means.  Just as the U.S. needed to take a leading role against the Axis in WWII, because we had the industrial might to do more than the outnumbered British or the conquered French, we have to take a leading role against this enemy.  In some ways, it's not fair.  But the facts on the ground don't change.  Those who can do the most have to do the most.  The President doesn't like the idea of the U.S. surrendering some sovereignty, but we are really not: as the accords are not binding, we can choose how much to contribute or how much to change. The other nations can't force us to, say, contribute $200 billion over the next whatever vs. $100 bliion (or $300 billion).   We can and msut take a leadership role, but we decide the details of that role. 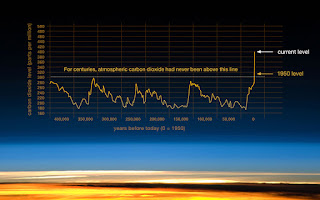