A Grand Slam of Dunkleosteus models

The latest Dunkleosteus model I found turns out to be part of a group. A Cleveland Museum of Natural History contest produced the irresistible name “a slam of Dunks” for any assemblage of the world's coolest fossi fish, so I use it here for four closely related models or toys that have popped up.
I found my newest Dunk on eBay. It’s made in China and marketed in a series called “Animal Paradise.”  Other Devonian creatures would not have included the Dunk in anything called an animal paradise, but anyway it struck me as a very handsome animal, garbed mostly in green with spots and countershading. (That's offset a bit, alas, by the peculiar "panda" circles around the eyes. I don't think Dunks put on makeup for their dinner dates.)
The second thing that struck me was it was identical to the popular (though inaccurate) Schleich Dunkleosteus. All the telltale features were there: single-lobed tail, external armor with scratches, those weird giant scutes running down the flanks, and bizarre scalloped fins unlike any seen in real life on placoderms or anything else.

Top photos posted by Amazon sellers: bottom photos (you can see a bit of a dropoff) by Matt Bille

The AP animal differs only in some minor things like slightly protruding lower biting plates and slight upward curvature of the fins, but those look like ordinary manufacturing variations. So the same factory, I think, is running these off, although they altered the mold just a bit to removes the manufacturers’ name and the national origin of the model. That indicates it wasn’t intended for export to the U.S.
It does, though, turn up on Amazon from a seller called “LoveinDIY.” So if you want one, you can grab it. I DO prefer it to the Schleich model on the paint job, which makes it look as through the armor is under skin (which it probably was) rather than completely exposed bone.
The other two Dunks inspired by this are a larger Chinese-made foam model, a fun toy if not really a “model,” and the toy from the Animal Planet Dunkleosteus Deep Sea Exploration Playset. The latter is what tank experts would call “up-armored,” but the fins and other details definitely indicate the modeler was looking at some version of the Schliech dunk. 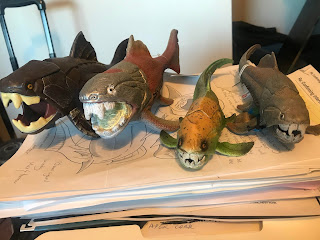 Finally, the paint job on the new looks heavily influences by the Mojo Dunk that’s one of my favorites.
So everything here (including the MOJO Dunk) is manufactured in China, and the ones making up the four-Dunk Grand Slam are either of the same origin or cross-pollinated (legally or otherwise, I’ve no idea.)
So there are Dunks for every taste. That’s the good news, as always!
Now about those fins…

Posted by Matt Bille at 9:45 PM No comments: