The endless weirdness of sharks

Back when I was a kid reading about sharks, there were "more than 200" living species. Then 300, then 350, and now it's over 500.  In addition to being numerous and of global distribution, the shark clan also boasts creatures so weird they could (and do) create nightmares.  Prehistoric sharks, were, if anything, stranger.

In the oceans today swim the 15-meter whale shark, the 7-meter great white, the blimplike megamouth, and several species of the bizarre hammerhead. In the oceans of yesterday swam the 15-18m Megalodon, the bizarre "ironing board shark" Stethacanthus, and Helicopreon, which had a "wheel" of teeth" - it looks like it tried to swallow a (vertical) power saw blade. 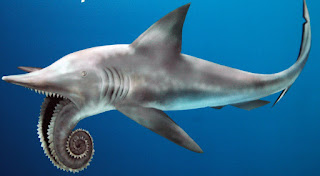 Helicopreon (artist unknown, license marked "Free to Share and Use"  by Bing) 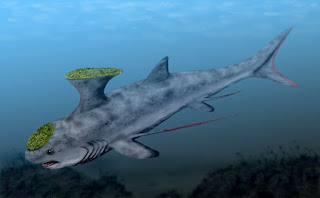 Stethacanthus  (artist unknown, license marked "Free to Share and Use"  by Bing)

We have new species of present and past sharks, and they continue the weirdness.

From the modern sea, far far below the Pacific near New Zealand, comes the 1.8m kitefin shark, the largest luminous vertebrate in the world. I always thought a glowing shark like the ones in the Meg novels wouldn't be able to find prey down there (it's like swimming around with a big neon sign saying "SHARK!").  Apparently, though, enough inhabitants of its realm are just too curious about light sources.

From the past we have  Aquilolamna milarcae. Thanks to pectoral fins that rolled out like glider wings, its 1.8m "finspan" made it longer than it is wide.   This Cretaceous resident was more a drifter than a hunter-killer.

The sharks... still full of surprises.

Posted by Matt Bille at 7:46 PM No comments:

Yesterday I watched my favorite big-bug movie, "The Deadly Mantis" (with MST3K commentary). It's a decent story and well-acted, but I'd forgotten how slow it is. It's as if the model mantis (which has decent texture and movement, for the time/genre) had in its contract it only needed to appear 10 percent of the time, so 90 percent is people talking in offices. It opens with a LOT of footage from Air Force training films of the military's early warning radar nets watching the Arctic skies for Russian bombers. It also has the usual glitches of these movies: American planes shoot rockets at the mantis, but when the camera pans back to the planes the rockets are still there under the wings. The stock footage is pretty good throughout if you like 1957-era planes. 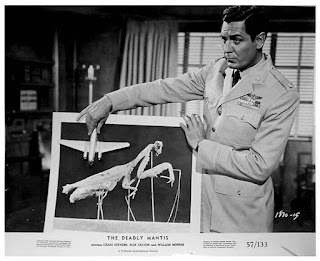 The scientist character from a natural history museum tries hard to make it all believable. Someone wrote some dialogue that at least sounds "sceincy." (OK, not the part where he suggests mammoths frozen in Siberia might have been ALIVE when unearthed.)

Still, one of my favorite movie monsters of all time. It ranks, for this era, with the giant ants in Them!

Trivia: An Eskimo village is Canada is found abandoned because the mantis attacked and everyone fled. The story is circulated endlessly in paranormal websites and literature as having been a real unexplained disappearance. I wrote once to the RCMP to nail it down, and they politely replied they'd searched their records many times and it hadn't happened.
Other trivia: the newspaper headline in the film (below) is a tribute to my hometown.

UNtil next time, visit me at MattBille.com
Posted by Matt Bille at 4:48 PM No comments: