Humans in the Americas- When?

I've always had an interest in when humans first stepped on the North American continent.  The needle was stuck at 10-12,000 years before present (YBP) for decades.  The early Clovis people had come across the Bering land bridge and, in an amazingly short time, managed to populate both continents (and, most theories have it, wipe out the megafauna they found in abundance.)

There have always been arguments for sites like Meadowcroft Rock Shelter in Pennsylvania ( where a sizable minority of archaeologists accepts 16-19,000 YBP) and Monte Verde in Chile (argued to be from 14,800 to 33,000 YBP), Other sites have generally pushed back the 12,000 YBP consensus to around 14,000, but vigorous debate continues on older sites.  A new paper published in 2017 is sure to spark more debate: it puts remains found near Old Crow, Alaska, back as far as 24,000 years.

None is as contentious as the Cerutti Mastodon site near San Diego, where a mastodon shows strong signs of being butchered and the long bones broken apart for marrow.  Hammerstones and other human stone implements surround it. How old is it?  According to a letter published in the top journal Nature, 131,000 YBP.  Or to quote the letter, "Th/U [thorium-uranium) radiometric analysis of multiple bone specimens using diffusion–adsorption–decay dating models indicates a burial date of 130.7 ± 9.4 thousand years ago."  That's a startling claim indeed.
How would humans have come so far south so early?  While shorelines on Western North America have receded since the Ice Ages, submerging many known and possible sites, we don't have hard evidence that any pre-Clovis people (or, in this case, pre-pre-pre-Clovis people) used boats or rafts to come down the coast, and there's not a chain of known settlements close enough to each other (or dated closely enough) to indicate a land migration. Yet here we are.
If they were really there 130,000 years ago, who were they? Early modern humans (EMH, a term replacing the too-limited "Cro-Magnon" with many scientists)  existed only in Africa.  It wasn't until 100,000 YBP they'd even pushed out as far as Israel.  What are we left with?  As far as we know, the Neanderthals never reached eastern Asia. A surprisingly advanced batch of Homo erectus? The still-mysterious Denisovians, who lived in Siberia and Southeast Asia? With just stones and mastodon bones, we don't have any human DNA to settle this with.
Critics think the discoverers got the dating right but suggest the human artifacts - if that is what they are - were left in the same area much later.  That raises a host of questions that can only be answered by similar finds - or, to a degree,  by a long search yielding no new finds.   Some of the area archaeologists would like to inspect, though, is buried under suburban homes and parking lots.
A mystery...
Posted by Matt Bille at 4:46 PM 8 comments: 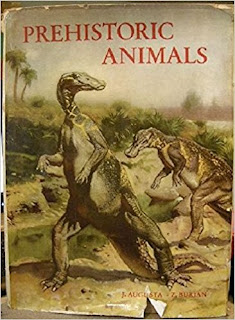 While much of the knowledge in this book is outdated, its influence and the excellence of the writing and illustrations using the information available in 1963 merit the five-star rating. This work enthralled a generation of professional, student, and public readers. Dr. Augusta's text, in this translation from the Czech by Dr. Greta Hort, is clear and informative, although a little dry in spots. He takes his topic from the beginnings of life and provides the full picture: the algae and the gymnosperms and all the other creatures that were such essential links in the evolutionary chain get their moments here. The book is called Prehistoric Animals, but the animals really don't take center stage until page 29 of the 47-page main text. He considers my favorites, the placoderms, "the oldest and most important" of the fishes of the Devonian in an evolutionary sense. He believed all other fishes descended from the placoderms, a point still being energetically debated in 2017. After a run through the animals, we get to the 60 plates, many in color, by the great Zdenek Burian. Starting with the eye-dazzling color plates to the Cambrian and Silurian Seas, on through incredible, photorealistic depictions of early fishes (Dunkleosteus, called by the old name Dinichthys, is wonderfully alive and fearsome even though the fins are, I argue, too small to control this huge, active predator). He presents the dinosaurs (in the old tail-dragging postures) and then addresses mammals like smilodon and the ground sloths (the primitive horses are a high point in a section that's nearly all high points) and finishes with the cave bear Ursus spelaeus.

Looking at the book today, the upright therapods and nearly-submerged sauropods remind us how much paleontology has advanced. This is a snapshot of the science, taken in a time of growth and change hampered somewhat by fixed ideas. But it's a gorgeous snapshot: once you've paged through it, it's as memorable as the dinosaurs and other creatures themselves.

My copy, obtained used online, is a very fragile one, browning at the edges and clearly well-thumbed.  I don't expect to use it much as a reference, but it's a book so stunning and influential, despite the short text, that it's a book you just want to HAVE if you're a paleontology fancier.  Get it any way you can.

Whales: one stroke backward, one forwards

The North Atlantic right whale is as magnificent as an animal can get. Eubalaena glacialis can weigh over 70 metric tons and stretch 15 meters from its nose to its its deeply notched tail.  It bears distinctive callosities covered with white "whale lice"  on a stocky, black body.   As with all large whales, evolution hasn't really equipped the animal to be wary of still larger objects, like ships. The population, decimated first by whaling (centuries of it, going back to the first great oceanic whalers, the Basques, and  Native Americans, both in small open boats, before modern whalers had their turn), and now by fishing gear entanglement and hip collisions, dipped below 400 at one point before struggling to perhaps 450 (although a European population is functionally extinct). 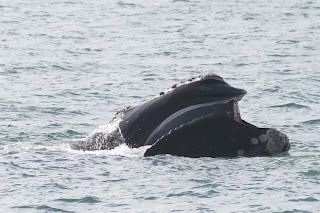 There was sad news today when a dead whale was spotted in the Gulf of St. Lawrence. This is the 11th carcass found in the Gulf this year. Others have been found off the American coast (they calve off Georgia and Florida). Necropsies of a few (such an effort is not easy to arrange, and many whales are not necropsied) and observations show a split between ship strikes and fishing gear entanglement as the causes.
The good news is that humans are not letting the species drift into extinction.  On top of existing protections, Canada imposed strict speed limits on ships in the Gulf over 20m long.   Meanwhile, in the eastern Pacific, where blue whales and others have been subject to the same lethal pressures, crabbers are part of a new program to track traps that may be scattered by storms and currents to become "ghost gear," drifting without supervision. Rather than engage in the complex politics of banning crabbers from large areas (a step the nonprofit Center for Biological Diversity, which is filing suit over the issue, says is still needed) skippers fix the position of drifting pots via GPS.  The next step, supported by fishery officials and the nonprofit Nature Conservancy, is to pay crabbers $65 for every pot they are able to take on board and return to port, where the original owners are usually happy to cough up $100 to get the $250 pots back.
The whales are in deep trouble on both coasts, but humans aren't just letting it happen the way we used to.
THANKS TO environmental scientist Laurie Baker, who keeps me up on much of the whale news.
Posted by Matt Bille at 7:24 PM No comments:

Return of the Night Parrot

Australia, home of so much unique fauna, hosts a diminutive parrot called the night parrot (Pezoporus occidentalis). For 67 years (1912-1979) there was not a single confirmed sighting, and ornithologists feared the green, yellow, and black bird had flown into the abyss of extinction. It survived, however, and was rediscovered in Queensland.  This year, as the result of efforts by four friends who'd spent over six years in the search, there is a photograph of a live night parrot from 2,000 km away in Western Australia. The nation's top authorities have confirmed the bird's presence (WA was the home of the 1912 sighting) and are ecstatic about another healthy population's greatly increasing the species' survival prospects.
It is not a good commentary on human beings, though, that the discoverers gave the exact location only to wildlife authorities in order to protect the species from poachers.
Posted by Matt Bille at 6:22 PM No comments:

Dino DNA after all?

This report seems to be a little breathless and premature, but a pregnant female T.rex fossil has been found to have a medullary bone - a structure containing concentrated calcium for the work ahead - in good shape. This is unusually protected, beuing within the structure of the femur (also, this, hard to find).  Professor Lindsay Zanno at North Carolina State University, "We have some evidence that fragments of DNA" may be preserved in such bones.

I like to report on new species, which still turn up pretty often. But 381 of them? Yes.  According to the WWF and Brazilian scientists, that's how many have been discovered recently. More than half are plants (which are important, just not as fascinating to me as animals) but add in 92 fish, 51 herps, a bird, and 18 mammals (plus two fossil ones).   Here's a video report if you want to have a look at some.
Posted by Matt Bille at 10:18 AM No comments: