A dove back from the dead

Brazil's Blue-eyed Ground Dove, Columbina cyanopis, seemingly vanished in 1941. It was a pretty olive/tawny, red, and blue bird (the blue appears in spots on the wings like a soldier's rank).  It was detected again by its unique song in 2015.
Its rediscovery led to one of those momentous decisions that's inevitable when a species is found but has only a tiny population (about 12 in this case): what's the best thing to do? Protect its habitat and hope it survives? Capture it and hope it breeds in an aviary? There are never unlimited resources available, and there are hard choices - and a lot of finger-crossing and prayers - when the staff of organization with responsibility makes the call. In this case: the conservation organization SAVE Brasil bought the land where the bird still existed and created the Blue-eyed Ground-Dove Nature Reserve.
Fingers crossed.
Posted by Matt Bille at 7:05 PM No comments:

These folks have put together a huge and ongoing compilation of news on our friends the cetaceans.
Among other recent news is some good stuff: this item on B.C. humpbacks proves humans can get together and set rules that enable heavily whaled populations to rebound.
And speaking of humpbacks, don't forget out Australian friend Migaloo.
Humpbacks are something very unusual. They have a genus to themselves, Megaptera ("giant wing") after those huge, knobby pectoral fins.  The fins are the can't-miss field mark of this species: no other whale, even the giant blue, has a fin that size.  Despite their genetic separation from other whales, they can create hybrids: there is a documented hybrid with the much larger blue whale and a reported hybrid with a grey whale. So say hi to the humpbacks and cheer their comebacks, and don't forget to wave. 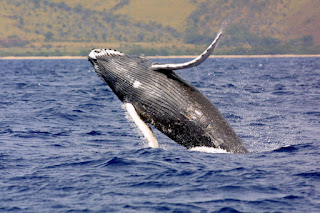 Posted by Matt Bille at 8:35 PM No comments:

Cheers for the rediscovered kangaroo and for this reminder of the still-important role of observant amateurs in science.
Posted by Matt Bille at 1:13 PM No comments:

Review: The Meg
As a lover of monster movies and creature movies and anything involving marine life, I have finally watched the Meg. It’s not great, but I feared worse. It’s a good summer popcorn flick.
SPOILERS AHEAD
The differences between the film and Steve Alten’s novel are so huge they make for two very different stories, but for the purposes of a film, the decision to shrink the timeline down to about three days and keep all the action in one patch of the Pacific works well. The pacing is very good and the visuals are terrific throughout.
Having said I enjoy the film, I will now put on my science writer hat and grumble about it.
First, the shark(s).  The shark looks a little odd, with the longitudinal strakes of a whale shark and pronounced caudal keels, but it basically works.  The CGI beast is good while it’s in the water, but never looks right when the animal is jumping (why does a shark from a deep trench cruise the surface so much, anyway)? Its appearance in the ridiculous final Jonas-v-shark shot is terribly cartoony (as is the whole shot, but the book’s way-out ending was probably unfilmable). They have, of course, opted for the largest possible version of Meg, about 75 feet: most experts make it shorter these days, but, again, it’s not enough of a problem to sink the film.
The underwater technology all looks cool as heck, but except for one scene the aquanauts seem to operate submersibles in and out of the Mariana Trench as though they are in much shallower waters. The idea the Meg can destroy a nuclear missile submarine is pretty silly, and the idea the crew is still alive at depths many times such a submarine’s crush depth really requires you to turn off your brain.  Nor can I figure out why crushed submarines explode like they were filled with nitroglycerin: you could say the big sub had torpedoes, but the entire length of the thing explodes.  The premise about the chemical layer giving the Trench a false bottom isn’t workable, but IS necessary for the story, so I’ll give that a pass.
The reason the ecosystem below 11,000 meters has schools of fish that look just like those in near-surface waters is… what?
The actors all look like they are having fun in their roles, which is what you want in a monster movie.   Jason Statham strikes the only false note: when he tries to be amused, his face looks like it will break. I think he was trying to convey what Jonas Taylor had been through, and how real mirth (as opposed to drunken banter) was a thing he was just starting to rediscover, but Statham overdoes underacting, if that’s possible.  The cast all works except the insanely precocious/cute child, whose presence feels forced in EVERY scene she’s in – it’s not the actress’ fault, but few of the emotions or actions in her scenes ring true for such a young child.   The rest of the cast works, though, and there’s fun to be had in the ensemble playing as egos and opinions bounce around.
There’s no attempt to work in real science so the audience goes away with some new knowledge. Granted, that’s not the purpose of the film, but they could have done it.  For example, someone could have offered a theory of why and how a shallow-water shark switched to living under tremendous pressure how it survived the abrupt change to very slight pressure.  The one attempt at an environmental point (the evil of shark finning) is another thing that feels forced in, and nowhere is it explained why the shark is attacking random boats, which it doesn’t know have any food, and in practice the food return is very limited for a predator this size (I commented on the trailer saying the shark didn’t look the same size in all shots, but I stayed away from reading reviews and didn’t realize I was looking at two sharks.)
The dialogue has some quippy one-liners: my favorite exchange comes when someone says, “We should seek out non-lethal options” and the reply is something like “For it or for us?” Taylor’s Finding Nemo joke is hilarious. But there are also endless cliché lines about man and nature and some real clunkers: actor Page Kennedy is saddled with stock “big black guy” lines that just HURT.
The tone is about right, but the horror moments are undercut by the PG-13 minimization of the damage done to humans, sharks, and other creatures.  There’s a reason the greatest shark movie ever (nodded to several times in this film) was an R.  If you want to scare an adult audience with sharks, they need to create the carnage real monster sharks would.
Now, you may be saying: “Wait, I thought you LIKED this film!”  I did. It’s fun to watch, the cast is pretty good, the direction is good, and the shark has some great moments.  Just don’t use it in a marine biology class and expect an A.

From the Conference on Small Satellites

The annual Conference on Small Satellites, my favorite event next to Denver ComiCon, is history.
I got a great reception for the paper on smallsat-enabled whale tracking. A lot of people just liked that it was different from the parade of engineers discussing the specifications of their multispectral sensors or whatever.  The topic and the Booz Allen Hamilton OceanLens(TM) visualization software embedded in the presentation woke people up a bit even after the long lunch break.  I asked for partnerships in making a better system worldwide, and a lot of people had ideas. We will see where it goes. Thanks to the great staff at Utah State University and the Space Dynamics Lab.

Here's the paper (this version has a couple editing mistakes I missed when uploading).
Here's the full program.

There were a lot of good presentations from government, military and civilian, all emphasizing how serious people are getting about making the most of the ever-increasing capabilities of small satellites.  NASA is dedicating $100M in investment, DARPA has a $10M small-launcher challenge on, and everyone is talking (I hope seriously) about changing old cultures to emphasize speed and flexibility. (One of the things smallsats offer is that agencies can afford to refly a mission is the launcher or spacecraft fails.)   There were plenty of industry participants, from large companies and small (or smaller companies bought by larger ones. The highly innovative Orbital Sciences is now part of Northrop Grumman.
The NG presenter on the state of the small launcher industry stunned even me by counting up over 100 launchers in development or proposed. Only a fraction of these will become operational, but for a while (after NASA retired the Scout and SpaceX moved on from the Falcon 1)  there were only a few very expensive small launchers on the market. That's clearly in the past.
A record 2,800 people attended some part of the conference.  The vibe is still there, though: the experimental, what-the-hell spirit that still exists alongside the corporate interest in hard numbers.
I can't wait for next year. 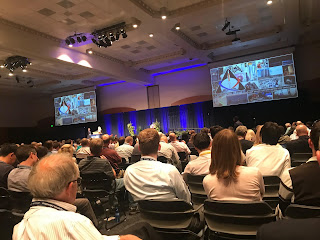 Posted by Matt Bille at 8:26 PM No comments: