Well, the animatronic wonder ("Rexy" in in the original Jurassic Park was a good 40 feet long and could tower 20 feet tall. She needed twelve handlers and weighed around 13,000 pounds (even more wet).     Sue, the world's most famous fossil, was probably about the same length and heavier (maybe 18,000 lbs plus) She took 30,000 labor hours to free, clean, and reassemble. She (the gender is not certain) stands about 13 feet high. The Field Museum proudly points out you're seeing the real skeleton, not a cast, although the head on said skeleton is a cast because they couldn't mount the 600-lb skull without the whole thing crashing down.  But the real skull is right there on display. I have not met Sue, but she is on my bucket list for sure.
Sue starred in one of my favorite fantasy series, The Dresden Files: one of the magic rules in Jim Butcher's series is that zombie are more powerful the older the body or skeleton is.  When zombies attack Chicago, wizard Harry Dresden knows just where to find a skeleton he can animate to mop the city streets with them...
Then there's Scotty.  Originally found in Canada in 1991 and teased out over decades from hard rock, the skeleton finally assembled (about 65 percent of it is there) indicates an animal that might have been several feet longer than Sue and a thousand pounds heavier.    The "might have been" is important if you think size matters, since we don't have as much of Scotty as we do of Sue, who was 90 percent complete.  And we really don't know how big an average adult was (some think Sue is in this category), or what might have been the size of an outlier.
Just say they were big. But it's sad they're extinct.

Scientists have placed four newly discovered species of tropical spider in a new genus, Stormtropis - stormtrooper.  They are orange-ish rather than white, but they are almost impossible to tell apart, hence the name.  (Alas, none of these species have a chrome phase that could be named for Captain Phasma.)  It is not known yet whether these spiders have any special problems with accuracy when they strike at prey.

This isn't the first species named from Star Wars, and surely will not be the last. This article counts 9 so far. An example is the weevil Trigonopterus chewbacca from New Zealand, which is not tall by any standards but has scales that look a little like brown fur.  An extinct giraffe ancestor whose horns reminded someone of Queen Amidala's hair was described in 2015 as reminded paleontologists of Queen Padmé Amidala's "swooping headgear," leading them to name their discovery Xenokeryx amidalae.
Posted by Matt Bille at 11:27 AM No comments:

Robert Goddard and the Space Age

Robert Goddard would not live to see the modern space age, but long enough to see its potential.  He had begun the liquid fuel rocket era with a launch exactly 93 years ago in Massachusetts.  He worked on increasingly sophisticated rockets on shoestring budgets until WWII, when he developed Jet Assisted Take Off (JATO) for rockets allowing heavily laden planes to lift off.  He saw the recovered remains of von Braun's V-2and knew what was ahead for space exploration. He also knew he could have supplied the U.S. with equivalent rockets if he'd had the backing and funding.  "I don't think he ever got over theV-2," one acquaintance said.
But what he DID do was more than enough to cement his place as a founder of the modern space era. Countless patents on guidance, control systems, better rocket engines, etc. formed the technical  underpinnings of the American space effort.
Happy birthday, Doc.  You were ahead of all of us.
Posted by Matt Bille at 9:44 AM 1 comment:

New footage of the most elusive orca

This is not the first time this animal has been observed, but it's a reminder that marine creatures can be elusive even when we know they exist.  Great video. We can't be sure if it's a separate species, subspecies, or ecotype, but the eminent Robert Pitman thinks we are on the way to describing a second species in the genus Orca (there have been proposals for new species before, including O. glacialis and O. nanus, but they really haven't caught on).  Orcinus orca has been thought for centuries to be a single species, but in this century it's become clear there are deep, if subtle, fault lines in the genus Orca, and the scientific discussion is just beginning.

The Type D made me wonder about the enigma called Wilson's whale, but the identification is far from certain. 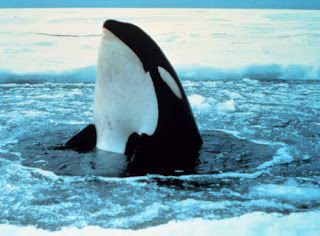 The ocean sunfish, mola mola, is one of the strangest things in the seas. It is enormous, the heaviest bony fish in the world at over two metric tons: it has, unusually for a bony fish, a hide that can deflect hand harpoons; and it is weird-looking, like a somewhat flattened blimp with fins.  The body seems absurdly short for all its size, as if the Creator got halfway through it and lost interest. (Or, for those old enough to remember, it looks like a subcompact car called the AMC Gremlin.)   It roams harmlessly through the oceans, slurping up zooplankton and (alas) plastic bags.  A new species, Mola tecta, slightly different and appearance and clearly distinct in DNA, was described in 2017 from specimens in the South Pacific. It was nicknamed the hoodwinker sunfish, in tribute to its hiding for so long in plain sight. What's new is that a specimen of M. tecta washed up on a beach in California, providing the first record of this animal in the Northern Hemisphere. The animal, over 2m long, has garnered media attention across the USA.  The hoodwinker's discoverer, Marianne Nyegaard, said of this far-ranging fish, "I couldn't believe it. I nearly fell out of my chair." What no one knows is whether this is a fluke, or there might be a population we don't know about.