New humans all over the place?

How many human species are there, anyway? New discoveries keeping adding more data and more  questions to the heap of possibilities.

Scientists have known for a long time there was never a neat line of human evolution from apes to "cavemen" to us.  That old chart some of us still remember from in school had a very simplistic view of our ancestors (and also showed them as white guys). 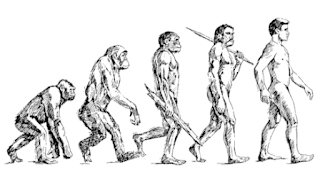 "Scientists have many more pieces of the human-origins puzzle than they once did, but the puzzle is now vastly bigger than it was previously understood to be. Many gaps remain, and some may never close. " - Kate Wong in Scientific American

A good start for the topic is this article on human evolution from the Smithsonian. What's notable about this is that it was published in March of 2021, and it's obsolete.

Just in the last few years:

In 2019, the new species Homo luzonensis was named form the Philippines. It's small with an unusual mix of features including fingers and toes adapted for climbing. The find was published in Nature.

In 2021, we have Homo longi, "Dragon Man," a species from China, at least 146,000 years old. There's a lot of buzz about the size of the skull: it shows a brain the size of a modern humans, and that alone is a stunner to anthropologists. (The formal paper is here.)

And now we have the "Nesher Ramla Homo type" from Israel, some 20,000 years younger. The discoverers don't think it's a new species, but it's unique, with some Neanderthal traits. (Here's the paper in Science.)

Where is all this taking us? To greater knowledge, yet greater mystery. It's a fascinating topic we may have only begun to grasp.

Posted by Matt Bille at 8:38 PM No comments:

My interviews on The Space Show

I haven't been on Dr. David Livingston's The Space Show in a little while, but I think of it very fondly. It's a long-running series in which David interviews administrators, astronauts, engineers, and the full spectrum of people involved in the national and global space community.

Some of these interviews may interest you space nuts.

2011, Broadcast 1614: The small-space revolution of microsatellites and CubeSats

2007, Broadcast 650: With Kris Winkler on the role of microspacecraft in NASA exploration

2004, Broadcast 260: With Erika Maurer on our book The First Space Race: Launching the World's First Satellites

2003, Broadcast 149: On microsatellites, launch vehicles, and extraterrestrial life, among other things

Thanks, David, for all the opportunities. See you again soon, I hope!

Posted by Matt Bille at 9:07 PM No comments:

World War II has always been one of my top historical interests.  It's hard for modern people to even understand what total war is. While I was born in 1959,and my father served after the war, I still read on it a great deal. A war of this magnitude is a grand-scale mix of the great and the small: the sweep of armies, the decisions of governments, and the actions and experiences of human beings. Having some background as a historian, I'm always interested in the little corners, the forgotten stories.

One book that came to my attention is this slender memoir by a pilot who didn't do anything famous but was important nonetheless. His tale memorably demonstrates the human-experience dimension of the war.

Brave and Funny Memories of WWII: by a P-38 Fighter Pilot
by Lyndon Shubert 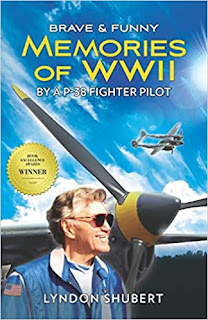 This is a terrific memoir, funny and honest. It's not one of those polished works with lots of detail, but that's a strength for readers wanting an unvarnished insight into a WWII fighter pilot's mind.

Lyndon Shubert flew P-38s for the 15th Air Force in the Italian theater, often on extremely hazardous weather reconnaissance missions. In this days before satellites, these were critical: before risking hundreds of planes as well as expending precious bombs, bomber units needed to know what the weather on the route looked like.  Carrying out these missions meant long solo flights over Axis territory.

Most pilots present themselves as God's gift to flying, but Shubert is the opposite. He admits upfront he was not the most talented of pilots. He barely got his wings.  Indeed, he survived an attack by four German fighters on his first mission because his incompetent handling of the P-38 resulted in crazy maneuvers the enemy Me-109s gave up trying to match. But he kept flying these hazardous missions, charting weather that affected not only the lives of men in the bombers but also the innocent people on the ground. Since WWII high-level bombing was inaccurate by modern standards in the best of conditions, bombing through clouds meant anyone could be on the receiving end.

(Historian's side note: I reject the modern claim that such bombing was a war crime.That comes from people who don't understand that there was simply no other way to attack targets in the enemy's rear 70 years ago, and leaving Axis war factories, air bases, and synthetic oil plants in their home territories alone was out of the question.)

Shubert tells, in simple, unadorned, effective prose, the emotions of flying from ecstacy to terror. That he and his plane were considered expendable in the service of the mission adds a sort of background note of adrenalin.

Whether he was taking on half the rival 8th Air Force in a bar fight, going AWOL to chase a high school sweetheart who was assigned to his theater with the USO, or raiding a commissary he wasn't allowed to use, Shubert stayed one step ahead of the Germans and one step ahead of courts-martial to win the Distinguished Flying Cross and came home to a long life as an actor and a film technology inventor. This memoir is like nothing else you're likely to read from the war.

Posted by Matt Bille at 3:12 PM No comments:

Why Cryptozoology Don't Get No Respect

I like cryptozoologists, at least in general. I like their un-killable optimism, even when it becomes unreasonable. Folks who strap on backpacks and hike into the forests in hopes of meeting sasquatch are, at the least, looking for something first-hand. That sasquatch-hunters (I don't mean to focus solely on the big guy, but he dominates the topic like a Gigantopithecus in a field of pygmy marmosets) haven't contributed to zoology so far doesn't keep me from cheering them on. I always hope they might, despite overwhelming odds against a huge North American mammal being undiscovered, find some hard  evidence.

I've argued before that cryptozoology is scientific in theory, if not in practice. "Animal X lives here" is a falsifiable hypothesis.  And it's too easily forgotten that cryptozoology, despite a justly-criticized overemphasis on large animals, used to get broader scientific respect. Nessie and sasquatch were once serious topics, especially in the 60s and 70s. Today, despite more people than ever believing in the existence of the "star cryptids," very few working scientists want to deal with it. The field is sunk in sensationalized or outright faked TV shows, endless repetition of the same cases on the internet, and so many reports of sasquatch that no one can take them all seriously.

I'm not a scientist or a field researcher. I offer my opinions based on a good 45 years of interest, reading, discussion, etc. that's produced two very-well-respected books and an eternally-delayed third.  I think cryptozoology as a whole needs to turn a much more skeptical eye on fuzzy photos, old newspapers, allegedly lost or confiscated evidence (it's not evidence unless you have it), etc.

To my main point: the item that troubles me most as a cryptozoology-sympathizer is the allegedly paranormal/psychic/parapsychological factor proposed for some cases.  I'm well aware that sane human beings have reported apparitions, including animal-like ones, creatures that make psychic contact, etc. But while I’ve no particular insight into what mix of causes is behind that phenomenon, I hold this truth to be self-evident: there’s no faster way to make ANY zoologist stop listening to you than to suggest this topic has any place in their field.

My position is that, if a case does not concern a physical animal,  it no longer pertains to cryptozoology or any kind of zoology.  If someone believes they saw a sabretooth tiger that disappeared into thin air, for example (this report is chronicled in Nick Redfern’s book Monster Diary), then the fact the apparition was in the form of an animal doesn't put the event under the heading of cryptozoology. It can be parapsychology or any other field one may think appropriate, but if it's not zoology, it's not cryptozoology.  People who think sasquatch is not a material creature are welcome to that opinion, but that’s part of the whole business of apparitions and spirits and the paranormal. It also, critically, is not a falsifiable hypothesis: you can never prove such a belief to be wrong.  If a thorough search fails to find an animal in the place it's been reported, the animal either did not exist there or has moved on.

There's a nice example in Vietnam.  There are intriguing reports of unknown primates, sometimes called "rock apes." That's cryptozoology. Martin Caidin's book Natural or Supernatural includes a report of apelike primates in Vietnam that were unaffected by mass automatic weapons fire at point-blank range. That's not cryptozoology. (People have no doubt had real encounters with animals they dressed up with supernatural details, but as long as those details are attached, there's nothing zoology can do with such reports.)

I don't dismiss the possibility of a nonmaterial reality: since I believe in God, I don’t think the material universe is all that exists.  But an apparition is not an animal.  It may be reported to look like one, or even act or sound like one, but that's not the same thing.  Cryptozoology will never regain any of its respect with zoology if paranormal entities are part of it.  People’s experiences of such “zooform” entities are simply part of another field of study.

The Wonderful Thing About (Caspian) Tiggers

There are two ways a species can return from extinction (bar cloning, which we will likely get to eventually).  One is to be rediscovered, and seevral recent examples are described in Forest Galante's new book Still Alive (It's a fascinating book, and I'll do a full review soon.)

The other is, a bit paradoxically, to have never been a species at all.  Davud Brewer's book Birds New ToScience: 50 Years Of Avian Discoveries (2018) discusses dozens of brids which have been struck off the species list after later scientists discovered they weren't valid (they were part of a known species, they were hybrids, they were oddly colored individuals, etc.)

The Caspian tiger (Panthera tigris tigris) has been thought extinct.  I wrote in my book Rumors of Existence (1995) that: "The  Caspian tiger may also be extinct.  It once ranged across much of central Asia, but no recent sightings have been confirmed in Turkey or Russia.  A pawprint cast taken in Iran almost twenty years ago recorded the passage of a solitary animal, perhaps the last one in that country.  Today, a few may linger in the mountains of Afghanistan."

As it now turns out, though, it was not extinct.  It was part of the same species as the Amur tiger, which is also now part of P. t. tigris.)  is doing ok by tiger standards (all tigers in the wild are endangered the Sumatran is extinct and the Javan almost certainly so). Now a WWF project is looking at moving Amur tigers to Central Asia to bring the tiget back to its historic range.  Paradoxically, the animal has both been lost and found.

Until next time, visit me at: Matt Bille