Sixty years ago today, America made it into space. I was proud to chronicle the story.  With help from Erika Maurer and a Foreword by Dr. James Van Allen, we wrote The First Space Race, the first book to tell the American and Soviet stories together.  (It was the most complete story possible in 2004 (a few then-classified or misunderstood facts have come out since then, I admit: but it's still a great book).  This is the story as told to us by leaders pf the American efforts who were still alive. 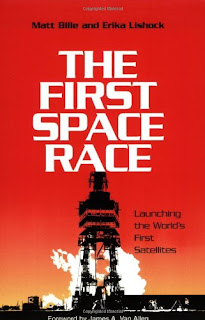 The Explorers: a poem of remembrance

The souls departing Earthbound life
Rise to heaven’s plane
Soldier, sailor, priest, or king
The destiny's the same
But in an even higher realm
With stars always in view
Meet those lost in exploration
Remembering how they flew


Komarov toasts Gus Grissom
And Resnik talks with Clark
Ramon and Chalwa share a tale
As they look beyond the dark
Adams shares his glory days
With Husband and McNair
And always they watch
And urge us on
To rise above the air.

Don’t cling to mother Earth, they’d say
God has given us the stars
There’s a reason we aspire
To cross the celestial bar
We gave our lives
(we don’t regret)
To push back the frontier
Remember us by challenging
And rising past your fears

Patseyev, Onizuka
Anderson and Brown
Salute each new endeavour
That lifts us from the ground
To every new thrust into space
They raise their glasses high
And remind us we were always meant
To reach beyond the sky.
- Matt Bille, space historian, 2014
Posted by Matt Bille at 2:41 PM 2 comments:

How small can a mammal get?

Mammals are ectotherms, regulating their own body temperature,  Arctic animals tend to be large because that minimizes the ratio of surface area to total body mass, thus making sure heat loss through the skin, while breathing, etc., doesn't exceed the ability of the internal "furnace" to pump enough warmed blood to keep the whole system going. (The heat generated by moving the muscles is also important: some whales, with thick coats of blubber to insulate them, can actually burn internally if killed by whalers and left floating without being cut open. )
That ratio obviously gets worse, from a thermal point of view, as the mammal gets smaller. One adaptation is increased heartbeat. Your heart might beat 70-100 times a minute, while a mouse's pulse starts around 300 and can exceed 800 when excited.  But there's a limit to the point at which this works: we will never see a mouse the size of an ant.
What we do see, though, is pretty amazing.  The size limit of mammals has been defined downward several times by discoveries in the field.  The smallest rodent, the pygmy jerboa, weighs only about 3 grams.  (The queen of the African wandering ant, swollen with eggs, can weigh 10g, so we have to walk back a little the "no mammals the size of ants," even though a worker ant weighs a few milligrams - 90, in the largest species.)
The jerboa isn't at the bottom of the scale, though, Kitti's hognosed bat and the Etruscan shrew are approximately tied around two grams. (The shrew's heartbeat? A modest 1,500 per minute.) It is unknown whether we might find any still smaller mammals. By definition, they won't be easy to spot.

IUCN entries for the smallest mammals:

The great ice-covered continent has been a mystery to scientists in many places, simply because the ice shelf may extend many kilometers into the oceans and there's no practical way to study the waters and land underneath it. Many expeditions with the latest tools have nibbled at the edges, but Nature herself can sometimes lend a hand. Calving evens affecting large chunks of the ice shelf are worrisome to climatologist, but they offer many opportunities for marine biologists and others who want to study the newly-opened areas. This kind of opportunity is being seized now, as the British Antarctic Survey is out to see what the massive iceberg A68 has exposed.  Good luck, chaps!
Posted by Matt Bille at 3:00 PM No comments:

Cryptozoology, the search for unclassified or presumed-extinct animals, is a subspecialty some argue is not needed, but, as it's defined by backers, it's not inherently unscientific.  The world is crawling, literally, with unknown species, from ants to dolphins to (just maybe) some large mammals like Sumatra's orang-pendek. The most famous "cryptid," a large North American primate known as Sasquatch or Bigfoot, is certainly a reach, but the premise is at least testable (given adequate time and money).
Cryptozoology conferences range from those trying to stick to science to those openly embracing the paranormal and ideas about shape-shifting or interdimensional beings or apparitions.  One of the better ones, Loren Coleman's International Cryptozoology Museum conference, has completed its second annual event in Portland, Maine. A week later, the larger CryptidCon was held in Frankfort, Kentucky.
I went to the first ICM Conference, had a great time, and found most of the presentations valuable (I covered cryptic bears of the world). I missed this year due to back surgery but hope to make it in 2018.  It sounds like the 2017 conference was interesting: I'm sorry I didn't get to go and meet Bruce Champagne, among others.  The conference presentation list does raise the question of whether animals that cannot exist as described (the "dogmen" of the upper Midwest) belong at a conference that supposedly is focused on finding real animals, but Linda Godfrey has made the point that it's a fact that a lot of people are reporting something like a wolf-like humanoid, even if that's not what they are seeing.  So it's at least a valid folkloric question, if not a zoological one, to ask what sparks such tales.
I've not been to CrypticCon. Sharon Hill, a skeptical writer whom I have always respected even though we've disagreed, filed a report on her Doubtful News blog.
Looking forward to ICM 2018!

Posted by Matt Bille at 3:37 PM No comments:

This is a book stuffed with information and useful thinking for all those who seek a scientific approach to paranormal phenomena or have an interest in those who do. Hill, a geologist by training, has spent years researching oddities and oddity-seekers.  I've interviewed her before for this blog.  She reports here on her survey and study of amateur research and investigation groups (ARIGs), mainly concerned with UFOs, ghosts, and cryptozoology.  There are at least 2,000 ARIGs, with ghost-chasers predominating. 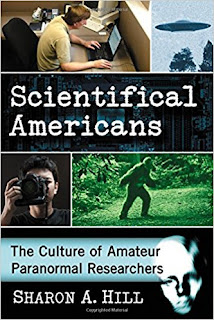 Hill draws a distinction between paranormal (phenomena that might be proved/resolved by science) and supernatural (which can’t, although ghost hunters keep trying).  She argues strongly that groups saying they are “scientific” usually grade out between poor to nonexistent when it comes to sticking with the precepts of good science. While Hill emphasizes there is no simple definition for science or the scientific method, there are many sound principles shared between scientific endeavors.  She does not present science or scientists as perfect, another important point often lost in short articles in the media that tend to go for simplistic believers-v-skeptics stories.  Her analysis of what is and is not scientific and why a lot of perfectly intelligent Americans have trouble with the distinction is worth the price of the book by itself.  Hill suggests some science educators view the public too simplistically, as mere receivers of facts, while a good chunk of the public views science as a static collection of facts and rules.  The influence of the internet and paranormal TV series (almost none of them scientific to any useful degree) has drawn huge numbers of people into paranormal investigation but hasn’t achieved any documented results. Neither the number of investigators nor the increased number of witnesses (also greatly increased by the influence of internet and TV) have done any lasting good:  a larger number of sightings does not add up, scientifically, to a stronger case. That doesn’t mean the sighting reports are useless, but Hill laments the lack of analysis of the sighting files and databases for patterns.

Hill’s chapters on the three main areas of “study,” ghosts, UFOs, and cryptozoology, are good but necessarily leave out a lot in condensing broad and diverse topics into single chapters. The Bigfoot-focused chapter on cryptozoology misses mention of the enormous influence of the late Dr. John Napier.  Here’s where I wish the book were longer: the brevity of these chapters and the book itself doesn’t allow Hill to tell us much about individuals, aside from a good piece on a pair of ghost hunters and a much shorter bit on two skunk ape hunters.   Still, the research and insights on ARIGs and overall paranormal beliefs make every page worth reading. (Hill mentions “uniforms,” such as the black shirts common among ghost hunters, and notes, “Cryptozoologists typically require a hat…” I found that both humorous and true: I’ve never done any sort of cryptozoological appearance without my low-crowned black Stetson, and hats like the late Scott Norma's fedora and Ken Gerhard's leather cowboy hat are iconic in  the community.)  The ghost chapter and the book’s extensive bibliography do miss what I think is the best book ever on the topic, G.N.M. Tyrell’s Apparitions (1953).

Hill critiques ghost hunters in particular for assuming that the things they can detect (variations in the environment picked up by EM meters or infrared cameras) are automatically considered evidence for things they can't (ghosts themselves). A drop in temperature, say, is is considered significant even though the link between such measurements and the supernatural hasn’t been established. She DOES think amateurs have a role to play in scientific investigations. Hill cites the unknown-primate DNA study of Professor Bryan Sykes, in which amateurs worldwide contributed samples to an expert: the negative results don’t invalidate the approach.

It all adds up to an excellent book, not only on the primary topic but on the definition and philosophy of science and the role science plays (and should play) in American society. When the main criticism comes down to wishing the book were longer, the author has done a great job.
Posted by Matt Bille at 3:09 PM 3 comments:

Legendary astronaut John Young has died.
The only astronaut to fly Gemini, Apollo, and the Space Shuttle was 87. Young walked on the Moon on Apollo 16 and commanded the first mission of the Space Shuttle. He was head of NASA's Astronaut Office and held many other titles and responsibilities including NASA Associate Director (Technical). He was a Navy captain and test pilot with 15,000+ hours in high-performance aircraft. He retired in 2004 after a military/aerospace/NASA career stretching back 52 years.
"A dreamer born is a hero bred / on Earth and up in heaven." - Mary Chapin Carpenter 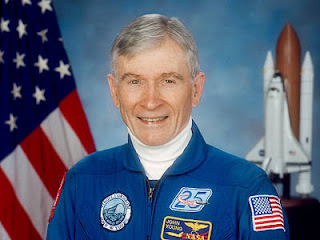 I'm not a medical person, but I like to know how things work - and how we KNOW how things work.  Here Dr Chad Hayes  attends an integrative medicine conference and finds IM can be broken into two categories: 1) things doctors already do, and 2) things that have no evidence to indicate they work.

Doctors Notes
Posted by Matt Bille at 7:27 PM No comments: