Book Review: Of Orcas and Men

Of Orcas and Men: What Killer Whales Can Teach Us

This is a very good book on the history and effects of orca-human interaction, from ancient Native American stories to the slaughters of the 20th century and the turn toward conservation in the 21st.  Seattle journalist Neiwert has spent a great deal of time with scientists studying orcas, and he gives us a lot of facts in the course of a compelling narrative.  He doesn't  try to provide every known detail: there are other books for that, such as Robin Baird's classic Killer Whales of the World.  (Interestingly, Neiwert uses the name "orca" throughout, although scientists are more and more going back to the old "killer whale.")
Neiwert admires the animals and considers things like personhood, but he nearly always avoids  slipping into Jon Lilly-type woolly-mindedness (he does at one point refer to orcas' "fantastic sixth sense," but that's a quibble.). I learned a lot from this book I didn't know, especially about release efforts and proposals. (Some involve Miami Seaquarium's Lolita, an animal I saw in the mid-70s but didn't realize until recently had been in that little tank alone for so many years and was still there.) The sad saga of Willy/Keiko is here, too.
Neiwert considers orcas and the media, including the effect of movies such as the positive Free Willy (not the remake) and the stunningly awful thriller Orca.  (He missed a family film I liked as a kid, Namu the Killer Whale, a very pro-orca film.) He spends a lot of time on the continuing global impact of the documentary Blackfish.  (To be fair, the marine park industry challenged the accuracy of Blackfish, and their arguments should at least be acknowledged, but Neiwert does mention the genuineness of the affection between orcas and their keepers even as he argues passionately for an end to captivity.)  The issues concerning the environment and ecology, especially as they affect his favorite orcas, the Southern Resident pod, are covered in depth.
I would have liked more photos and some illustrations of the whale-studying gear he often discusses, but the author achieves his purpose: to make us think more about orcas and how we can protect them.  An excellent addition to the literature on Earth's apex predator. 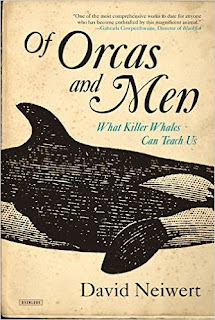 Wow. I'm still digesting it, but this book is very impressive.
In this overview of the cetacean world, Professor Berta marshals a variety of solid, up to date information, from whale biology and evolution to feeding techniques to range maps and field marks, with 2-4 page descriptions of 89 known species. Recent entrants like Daraniyagala's beaked whale, Omura's Whale, the Australian snubfin dolphin, and the narrow-ridged finless porpoise are all here. An interesting line in the long-finned pilot whale entry (by Jessica Aschettino, one of 37 named contributors) is "G.m. un-named subspecies." The killer whale section (by Robert Pitman) lists the animal as a single species with "at least six distinct ecotypes that may in fact represent different species or subspecies." Uncertainty about the exact delineations of minke whales, Bryde's, and others are also mentioned. For you mesoplodon fans, there are 22 species of beaked whale described in a section written by Randall Reeves.
The book is beautiful as well as informative. Photographs and other illustrations are plentiful, well-labeled, and helpful. The text is authoritative but highly readable to the nonexpert like myself.
The only quibble I have is with the physical book: the binding feels flimsy and the pages don't lie flat: handle it with care. (OK, there are two quibbles - killer whales deserve more than 2 pages, and there should be illustrations, at least silhouettes, of the differences between ecotypes).
Overall, though, this book is a magnificent achievement and a very useful reference. 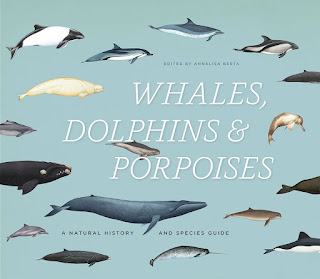 Also, you may be cool, but you will never be as cool as this magnificent orca, painted for my next book by the awesome wildlife artist Rebekah Sisk. 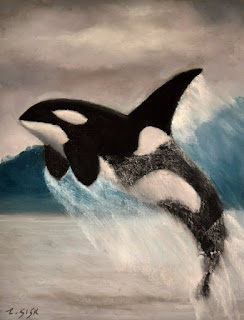 Not all new species are harmless little invertebrates or cute mammals.  The Kimberly death adder, about 60cm long, is undeniably a handsome creature, with its banded brownish-orange body and white belly, but it's just as undeniably dangerous. Acanthropis cryptamydros joins numerous other species of death adders all over the Australasian region.  The number of known reptiles has passed 10,000 and is still rising steadily. (The official 10,000th was a gecko from Laos.)  One estimate is there are another 1,300 reptiles awaiting description, but it may be considerably higher. There's a lot of foliage left in the world to conceal species that are well adapted to their environments and generally good at hiding.
Posted by Matt Bille at 8:52 PM No comments:

www.mattwriter.com is down for the moment

My website has vanished and I'm traveling and haven't figure it out yet. Will get it bcck soon.

Posted by Matt Bille at 6:51 PM No comments:

I've talked before about the ICM and Loren Coleman's efforts to provide a repository for artifacts, print materials, and everything else related to cryptozoology.  Whether you think cryptozoology is an intriguing branch of zoology or a pesudoscience where amateurs chase nonexistent animals actually doesn't matter when it comes to the ICM.  Animal science and animal folklore are important to every culture and country the world, and the ICM's collection of tens of thousands of items is simply not replaceable. It provides an invaluable trove for scientists, folklorists, researchers of animal myth and legend.
Accordingly, it's nice to see the Museum moving from downtown Portland, Maine to a larger permanent home.  Loren announced the 10-year lease on a bigger property on Thompson's Point in the same city.

By the way, the ICM is currently hosting, on loan from the Museum of the Weird in Austin, TX, the original Minnesota Iceman, a hoax creature made with considerable care and detail. 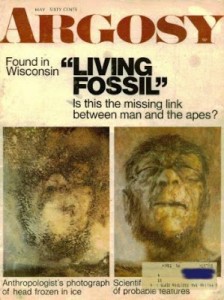 The Iceman once prompted two qualified scientists (Bernard Heuvelmans, Ivan Sanderson) to declare a new species of primate had been discovered. The ICM offers a chance to see a major piece of bigfoot history.

New location for the ICM (see note #8).
Used by permission of the ICM

Don't forget, the ICM's first sponsored conference is coming in January in Saint Augustine, FL.  Yours truly will be there to talk about bears in zoology and cryptozoology - a hot topic in the wake of Bryan Sykes' book.  I've never managed a visit to the ICM, despite being a Mainer by birth. It's still on my list. Good luck! 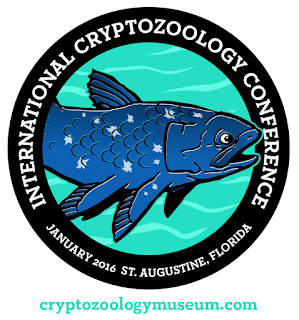 Sea scorpion - the size of a shark

The eurypterids or sea scorpions were the invertebrate kings of the  seas 400 million years ago. For a while, before the armored fish known as placoderms got to be the size of small buses, they were unchallenged. The largest species ever had spiked claws a half-meter long and could slice and dice anything it was likely to meet. (This was also before the nautilus-like ammonites started putting on weight - the monster Parapuzosia seppenradensis, 2 meters across, didn't show up until the Cretaceous and was not seen again until 1957, when something that might have been its much-evolved descendant starred in the delightful grade-B creature film The Monster That Challenged the World.)
Anyway, we have a new entry in the "scariest giant invertebrate with killer claws" category. Pentecopterus decorahensis, some 460 million years old, was found in Iowa, USA. It is described as 1m long with the usual eurypterid armor and armament.  It's the oldest such animal yet discovered, but it can't be THE oldest because it's surprisingly evolved.    The whole family tree of its larger group, the carcinosomatoids, is accordingly screwed up. That, however, is how science works.  For palentologists, the cool things is that they now know that looking in older rocks for sea scorpions is well worth their time. There are discoveries to be made! 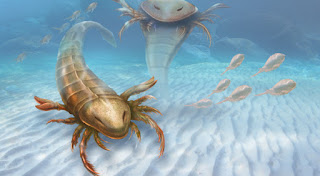