Collins, who rose to the rank of Major General in the United States Air Force, was described by all who knew him as extraordinarily competent, yet a humble man with a sense of humor. When Apollo 18 and 19 were canceled, he knew he wouldn't get to walk on the Moon himself, but he was always proud of the role he'd played in putting his comrades and his country on the moon. 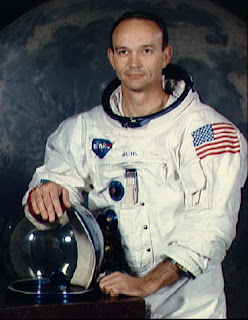 He was the first head of the National Air and Space Museum, a magnificent achievement that preserves aerospace history including many artifacts of the Apollo program.

His book Carrying the Fire is still the standard for astronaut autobiographies. In it readers will not only meet the man and understand his beliefs and motivations, but where he thinks the space program fits into the larger universe of human endeavor. As a bonus, Collins explains the technology involved in language all can understand. He conveys superbly what it was like to voyage in the cramped quarters of the Gemini and Apollo capsules through the harshest environment in the universe.

I never met Collins. I wanted to tell him, not only that I admired him, but I'd watched his launch to the moon. I was a 9-year-old watching from a plane my dad had rented from his employer, Piper Aircraft, in Vero Beach just down the coast from the Cape. (I wanted to meet them all, but I've only met Buzz Aldrin (who is well worth meeting!)

Michael Collins was 90 years old. From one Air Force veteran to another: a last salute. Ad Astra.

Posted by Matt Bille at 9:06 PM No comments:

Maybe readers can help solve this one.

What happened to Samson the bear?

Samson was a California grizzly captured as an adult in 1854 by John "Grizzly" Adams. Adams had seen (and killed) many grizzlies, but Samson was the biggest bear he ever saw. Samson was shown in Adams' menagerie, established in San Francisco in 1856, where Charles Nahl painted him: he became the bear on the California state flag. Samson was moved with the other animals (Adams' close companion, the famous grizzly Ben Franklin, had just died) to New York in 1860. At this point, Samson, while he carried some "cage fat," nonetheless was a monster: he was weighed on a hay scale at 1,510 pounds, whereas an animal half that weight is now considered a very big bear. He was billed as the biggest bear ever captured in the United States, and he quite possibly was (noting the U.S. did not own Alaska back then.)

There are few photos of Adams, and I've found no  information about whether Samson was photographed. I'd think he probably was at some point. 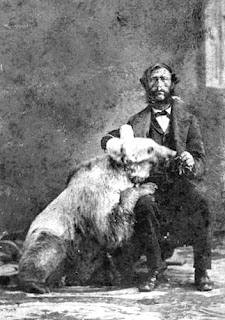 Photo of Adams with a smaller bear

Adams sold the collection to P.T. Barnum in 1860 and was hired to show the animals. Adams, who had a terrible head wound from an old bear attack that could not be treated with 1860 medicine, died on October 25 of that year. Barnum's American Museum mention Samson as a live exhibit several times. Abraham Lincoln would have seen Samson when he brought his family there in 1863. Barnum, of course, couldn't resist boosting his star bear's size. An ad in the New York World (February 21, 1861) reads, "OLD ADAMS’S CALIFORNIA MENAGERIE OF AMERICAN BEARS, GRIZZLY BEARS, &c.THE GREAT MAMMOTH BEAR, SAMSON, Weighing near 2,000 pounds." 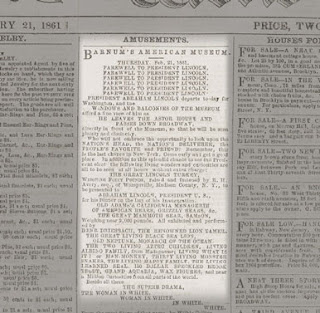 The mystery: I've never found a source that said when Samson died or what happened to him.

One source says he had "been removed" just before the 1865 fire, and the New York Times expanded on this by saying he had been sold in New Orleans. I have so far found nothing later. Whenever he died, he was probably not stuffed for exhibit (or at least there are no accounts of it in online archives) but it seems strange the mammoth skeleton was not saved. Does it still exist? Is it in a museum? Or is Samson, like its species in California, gone for good?