Cute? Yes. Deadly? Also yes. Nearing extinction? No, but it's declined, and the trends are worrisome.  I repeat here a review from 2009 of a book that explains the ice bear's world in a depth I could not undertake.

On Thin Ice: The Changing World of the Polar Bear.
Richard Ellis
2009, Knopf (New York).
Ellis, a writer, artist, and conservationist mainly known for his work on matters maritime, here turns his attention to Ursus maritimus. The polar bear is the largest modern land predator, albeit one that spends significant time in the water and depends on the marine food web.
The book is, not surprisingly, a very good one. It has Ellis' trademarks of thorough research (there is a typical Ellis bibliography, running 26 pages) and good writing. My favorite turn of phrase comes when, after reviewing how all sorts of polar bear parts are used for decoration and so on following legal hunts in Greenland, the author remarks, "In other words, nothing is wasted except the bear."
This book is a superb introduction to the polar bear, its world, and its interaction with humans. I had a pretty good idea from other reading how remarkable this animal and its adaptations are, but a lot of the bear-human history surprised me. For example, I had no idea anyone had, or could, train a polar bear team to pull a sled.
The most surprising thing for me, though, was how numerous the animals must have been centuries ago. Early European explorers didn't just see the occasional bear: they saw dozens, or, over a season, sometimes hundreds. I asked Richard if anyone knew the species' population before Europeans entered its realm. It may have approached twice today's estimate of around 22,000, but he cautioned there was no reliable number. All that's certain is that hunting and indiscriminate killing removed many thousands.
Ellis seems to have read every account by explorers, whalers, and everyone else who ever saw a polar bear. The bear's behavior is explored in depth, and some myths rejected. An excellent chapter explores why humans are so darn fascinated with the polar bear, along with the contradiction between our love for the adorable cubs vs. our willingness to kill adults even when they are not presenting a threat.
Then we get to the threatened status of the bear today. The species still numbers many thousands, and is not actually going to disappear anytime soon. However, there is no question that, as Ellis documents, climate change will affect polar bears more quickly and more severely than it will most species.
A side note is that, in an unaired portion of a 2008 interview I did for the series MonsterQuest, I hypothesized that declining ice to the north and more human development to the south would push brown bear and polar populations together, resulting in more "pizzly" hybrids. I tossed that off the top of my head at the time: I didn't realize that, as Ellis shows, more qualified people have advanced the same idea. A hybrid shot in 2006 is the first proven example of a cross occurring in the wild, but it likely won't be the last.
When Ellis discusses climate change, the reader gets the impression that it's a simple case of sometimes-hyperbolic but pure-hearted environmentalists vs. totally evil corporations and Republicans. I'm not about to defend the Bush environmental record, but there are debates about everything from the conflicting estimates of warming to the tradeoffs (never mentioned here) in outlawing oil and gas development in northern regions, and Ellis could have acknowledged that these subjects are complex even as he makes a persuasive case for action.
Essentially, then, the book has a zoology/history section and a policy section. The zoology/history section is wonderful. The policy section displays Ellis' passion for the bear in a manner that could have been given more context but is nevertheless gripping.
Summary: If the polar bear has an official biographer, it is Ellis. It's the same role Ellis played in his outstanding books about the great white shark and the giant squid. The result is a tome everyone with an interest in nature, bears, or the environment should read.
Posted by Matt Bille at 9:48 PM No comments:

A Rare View of the Moon

NASA's Deep Space Climate Observatory (DSCOVR) took this image and accompanying video of the Moon painted by direct sunlight. It looks like a Photoshop compilation, but it's genuine.  It's a universe of wonders out there! 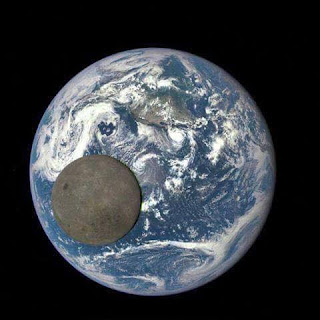 Posted by Matt Bille at 7:22 PM No comments:

I've posted on this before, but I like to reconnect every once in a while with the most awesome prehistoric animal except for my first love, T. rex.  Dunkleosteus terrelli OWNED the seas of the Devonian, "The Age of Fishes."

I maintain the most popular page on the Dunk, here on Facebook.  Over 1,000 Dunk lovers have joined me.

Oddly, there is no book devoted to Dunkleosteus at any level.  It makes several appearances in fiction and popular culture, but it's still getting no respect compared to so many other prehistoric predators. That's a shame.  At a good 8 meters long (claims of 9 or 10 meters don't appear well-supported), the Dunk was a predator the likes of which the oceans never saw until the rise of the great marine reptiles.  The giant biting plates, so sharp one paleontologist said he could practically see himself in them today, constituted an implement of destruction never equaled since. We are talking about the functional equivalent of great sharpened fangs, only the size of traffic cones. The teeth of Megalodon or T. rex or Smilodon never came close.  With a head and forebody protected by bone some 5cm thick and with bone rings around the eyes, everything about the Dunk was built for combat.

Once a Dunk grew to, say, 4 or 5 meters, the sharks of the day would not have been a threat.  Neither would the lesser placoderms,  Only other Dunks would have provided major competition. While paleozoologist Dr. Darren Naish once politely rebuked me for simplifying things down to "placoderms invented sex," they were the first vertebrates we know of to have male-female internal fertilization.  Did males compete for females? We don't know, but a clash between two armored submarines 8 m long must have been a terrifying spectacle.

Everything about the Dunk is scary, mysterious, or just plain awesome.  I hope you'll join me in following news of the study of this predator on Facebook and elsewhere. 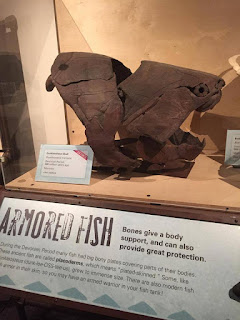 My daughter Lauryn photographed this Dunk at the University of Nebraska museum. 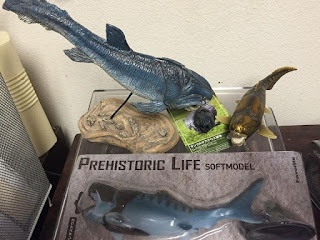 Part of my collection of Dunk models and memorabilia.

International Day of Women and Girls in Science

What are you doing to encourage the women and girls you know to learn about the universe? 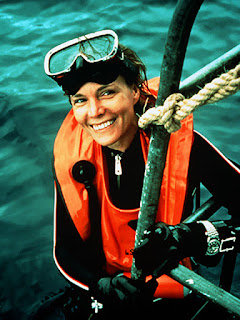 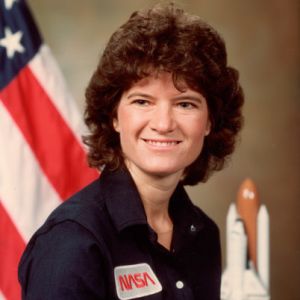 Posted by Matt Bille at 3:46 PM No comments:

The Snake on the Milk Carton

OK, the long-missing Cropan's boa of Brazil , the rarest boa in the world, was not put on milk cartons, but it was put on posters nailed up all over the Atlantic Forest area.  The snake hadn't been seen alive since the 1950s when two farmers practically tripped over one as they walked the dirt road to work.  They had seen the poster, so they grabbed the 1.7-meter snake and contacted scientists via WhatsApp information on the posters!   Herpetologists had searched the area many times without result. 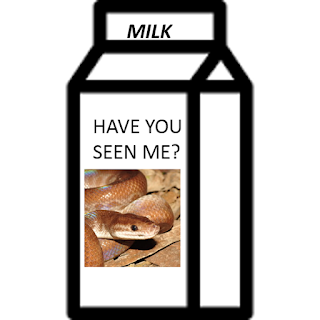 The handsome female snake, basically brown with black and darker brown markings, was released with a radio tag attached.  The boas, closely related to the pythons, currently count 43 species. We are constantly finding new snake species (31 in 2011) but this rediscovery was celebrated just as much.
Posted by Matt Bille at 11:56 AM No comments:

Note on the Van Allen belts

In the book The First Space Race, Erika Vadnais and I discussed the discovery by Jame Van Allen and his team of the lower Van Allen belt in early 1958 by a particle detector placed on the Explorer 1 satellite.  There are now known to be two belts, varying in thickness and intensity based on natural events (the Sun pouring out an increased volume of energetic particles) or human-made events ("pumping the Van Allen belts"), an effect most famously seen in the Starfish Prime nuclear test of 1962, which degraded or destroyed several satellites.  In 2013, NASA announced the discovery of a third belt.  The this belt was outside the other two, appeared only when a solar prominence had unleashed a very large flow of particles, and lasted up to four weeks.  It was once feared astronauts could be launched only through the polar regions, where the belt effects were weak or absent, but limiting astronauts' time in orbit and restricting them to an orbital altitude above or below the inner belt works, too.  Only the Apollo astronauts transited the outer belt, and they punched through it rapidly on their way to and from the Moon, limiting the exposure time and thus the exposure in rads to to a level that was survivable. 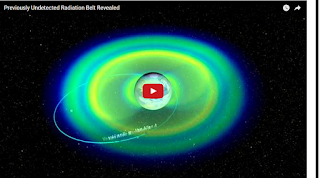