These days, there's not much to cheer about. Think about this, though: the pursuit of knowledge goes on. Science goes on. Not just in medical labs, but in every kind of endeavour humans engage in to learn more about the universe. It's a testament to our innate desire to learn, and what's more fun than to take some time out from COVID-19 to talk dinosaurs?

First, remember our friend Spinosaurus from Jurassic Park 3? Easily the coolest creature in a very uneven creature feature, the onscreen predator was just as much at home swinning up on people submerged as it was fighting T. rex.  Scientists have debated for a long time how aquatic Spinosaurus was. Did it swim, or was it just an occasional wader? The fragmentary nature of available skeletal material didn't answer that.  Now we know: Spinosaurus apparently was equipped for a crocodile-like lifestyle, tethered to the land but hunting fish, reptiles, and other dinosaurs in the rivers and shallows, snatching animals in the water or perhaps ambushing them as they came down to drink (which must have been hard with that sail). We know this because we have good fossils of the tail now, and it's a crocodile-like tail, flattened side-to-side, suited for propulsion for an animal that also shared the crocodilian tendency toward short legs and (we think) webbed feet. It was the first true swimmer we know of among the dinosaurs. The key fossils came from Morocco and were unearthed in 2017-18.
Coverage here from Nat Geo 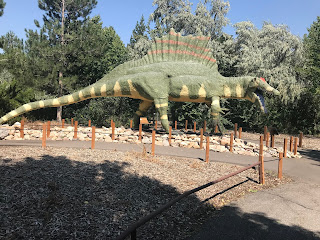 Spinosaurus at the George S. Eccles Dinosaur Park-Museum, Odgden, Utah  Rea;;y cool, but we didn't know about the tail. Photo by Matt Bille, 2018.


About unearthing dinosaurs. I've always wondered if some ancient traveler saw a Spinosaurus eroding out of a cliff and saw the sail as a pair of wings folded up. "So that's what a dragon looks like!"
The biggest dinosaur search of all time, called Mission: Jurassic, is on in Northern Wyoming, near the famed Morrision Formation.  Here's a fascinating story about the riches being uncovered and how one scientist has committed the next 20 years of his life to excavating the site. 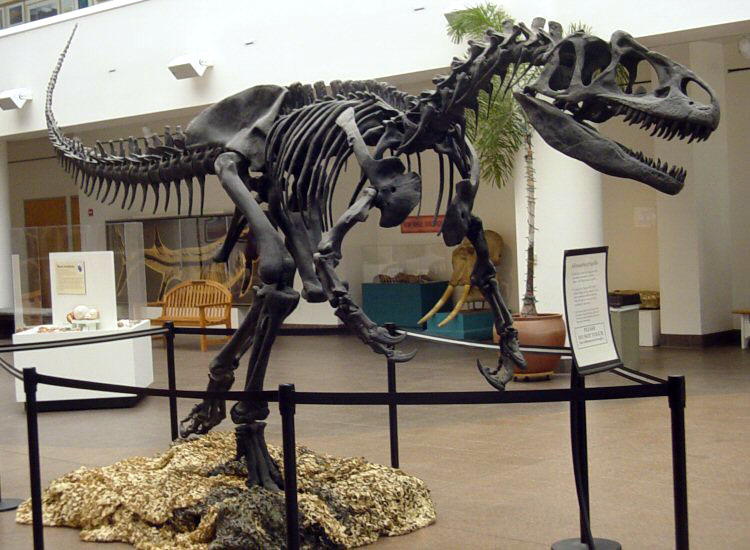 Allosaurus, a common denizen of the Mission: Jurassic site and the Morrison Formation (photo origin unknown)

Kimberly Ray, cofounder of the Marine Conservation Network, did an interview with me a couple of weeks ago, focused on whale tracking and conservation.  I'm no cetologist, but I hope there is some good stuff here for everyone. Thanks! 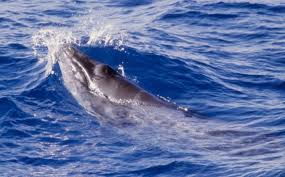 Posted by Matt Bille at 4:13 PM No comments:

On the 50th anniversary. there is room for both continued concern and aspirational hope.  Here's an article I did about a small contribution to one aspect of conservation, improving the tracking of whales and other engendered species.  Since I wrote this, NOAA has teamed with a French project called ANGELS to demonstrate successfully that smaller satellites can be part of the solution.

Posted by Matt Bille at 4:49 PM No comments:

I’ve talked about Dr. Darren Naish before.  A paleozoologist and science writer with a specialty in dinosaurs but interests everywhere, Darren’s blog Tetrapod Zoology is reliable and fascinating reading on everything from sea serpents to orangutans to every kind of zoological oddity.
The blog caught my attention this week for its headline about sauropod dinosaurs and whether scientists are creating too many species.  He notes some 50 “non-bird dinosaurs” are described every year, and there’s a proliferation of North American longnecks that some paleontologists think is overdone – there are 30+ species from just the Morrison Formation (Upper Jurassic Period).  One need not understand the subtleties of classifying dinosaurs (I certainly don’t) to wonder how complete the fossil record is and whether we know a few or most of the dinos from a particular place and time.  His response is that there are gaps where we know almost none of the dinosaurs.  Some caution is called for when we have only fragmentary remains, but given the time scale we’re dealing with (remember T. rex is closer in time to us than to most other dinosaurs we common folk have heard of) and the global spread of dinosaurs, there's a lot of room for discovery  Indeed, we sometimes, in effect, don’t have enough dinosaurs: an eternal war rages between those who think Nanotyrannus is a young T. rex and those who think it’s a species. (The latest research is on the T. rex side, leading me to brilliantly pun “sic semper nanotyrannus.”)
One estimate (not from this source) is that the average lifetime of a species is 3 million years.  In the 140 million years of the Mesozoic, there’s room for a LOT of dinosaurs.  The known species include cool mysteries like Amphicoelias fragillimus, now Maraapunisaurus, described in 1878 from a single, now-lost vertebra so large it indicates a dinosaur even bigger than the recently found South American giants.  It might, given its resemblance to the famous Diplodocus, be “a diplodocid diplodocoid, and probably a diplodocine diplodocid diplodocoid.” Umm, ok.
OK, that’s all the dino-rambling for today. Buy Darren’sbook.

Review: Voices in the Ocean, by Susan Casey

Voices in The Ocean: A journey into the Wild and Haunting World of Dolphins

By Susan Casey
Doubleday, NY, 2015, 320pp.
Casey, author of very interesting books on waves (her best work) and great white sharks, here recounts her efforts to more about our aquatic analogues, the dolphins.  It is a personal journey, and some sections are more compelling than others, but it’s a trip worth taking.
Casey is enraptured with the animals, and that’s understandable. She witnessed everything from hunting and captivity to the exhilaration of open-ocean encounters off Hawaii, and there’s a very interesting closing section on how dolphins were venerated and memorialized in art by the Minoans and their neighbors.  She talks to some top-rank scientists like Robin Baird and Lori Marino, but she says her curiosity could not be satisfied in labs and tanks, only in the ocean.
Casey tells us early on that it’s easy to “go down the rabbit hole” with the mystical side of human-dolphin interaction, and down she goes, offering a sympathetic portrait of the brilliant but bizarre John C. Lilly (kudos to her for digging through his personal archives and not relying just on secondary sources) and spending time in Hawaii with Joan Ocean, who holds that dolphins are “multidimensional beings” with wisdom beyond our imagination.  The most fascinating bit, scientifically, is her discussion of dolphin brains with Lori Marino. The dolphin brain “design,” Dr. Marino explains, is very different from our own. It prioritizes speedy processing and reactions as well as sensory inputs.  The book includes numerous examples of dolphin intelligence, some of them pretty startling.   It also features tales of dolphins rescuing people: as Casey notes, this implies animals, for some reason, sometimes see us as kin.
There are heartbreaking chapters on the slaughter and captivity of dolphins in the centers of the live-dolphin trade, Taiji Cove (Japan) and the Solomons, where Casey, at some personal risk, meets the brave and dedicated people trying to stop the carnage.  (Her description of the “Whale Museum” in Taiji is otherworldly, an example of how humans can warp their perceptions even about things they’ve personally witnessed.)   She looks at some of the marine parks where mistreatment and tragedy have occurred, including in Canada and the United States. She speaks to ex-trainers, most famously Ric  O’Barry, whose dolphins I once saw perform as “Flipper.” She denounces the “swim with dolphins” programs, which she shows include extreme confinement of the animals to make sure they’re available. A welcome counterpoint is her visit to Dingle, Ireland, to see Fungie, a bottlenose who has seemingly adopted the town and has spent 30-plus years interacting with the people who venture out to see him.
This is a personal journey and not a treatise, but a few omissions seem odd. Casey never asks current dolphin trainers for their views - I agree with her that captivity should be phased out, but castigating it without those voices oversimplifies things.  She notes that dolphins are not all happy and gentle creatures, but ignores the details. Bottlenose dolphin females are forced into sexual congress by groups of males that ram them, bite them, and tail-bash them to make them submit. Some newborn calves are batted through the air and rammed until they die. Many other mammals do similar things, but there is a bit too much rosiness in the portrait of dolphins. Casey doesn’t entirely embrace the more extreme metaphysical beliefs, but there’s no skeptical counterpoint, either. Ancient and modern indigenous people who honor or commune with dolphins are celebrated, but the ones that killed and ate them go unmentioned.
Again, though, this comes back to being Casey’s own attempt to learn more and connect more with dolphins and it helps that she’s a very good observer and writer.  Dolphins are fascinating, and Casey shows us many of the reasons why. The book’s omissions make me think she loves her subject too much, but that’s not the worst of sins.  If this is not the whole story of humans and dolphins, it’s a compelling and often memorable chapter.  There’s a good set of chapter notes (neglected by many modern writers) and a bibliography.

Posted by Matt Bille at 8:32 AM No comments: