NamingNature: The Clash Between Instinct and Science 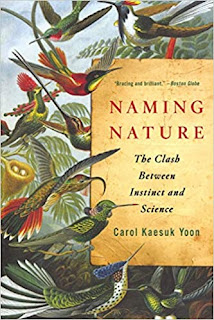 With the advent of increasingly sophisticated and quantitative approaches to taxonomy, we overlook the ways different cultures label and group animals.  Biologist and top-flight science writer Carol Kaesuk Yoon set out to write a book on the science of taxonomy and found a landscape much more varied than she’d imagined. She embraces the concept of a near-universal human way of perceiving nature, the umwelt, originating from our ancient hunter-gatherer experience.   The Linnean approach is a bedrock technique for imposing order on the umwelt by deciding what animal goes where, and she gives a lively history of the major figures while foreshadowing the advent of cladistics.   This continues through Darwin and into the twentieth century, where taxonomy became strictly the province of experts as the lumpers and splitters continued their often-uncivil war.  (There were, at one point, 2,600 named genera of birds according to lumpers, while splitters saw over 10,000 genera, more than the number of species we accept today.)  Darwin thought natural selection would perfect taxonomy and end disputes: he couldn’t have been more wrong.  Evolutionary taxonomy was fully as acrimonious as any other version.  Other conflicts, such as the worth of taxonomy itself, carried on, as did the never-ending dispute over how to define a species.  Ernst Mayr’s Biological Species Concept held for several decades, but it was challenged by Simpson’s revision of the evolutionary species concept and more recently by the rise of DNA and then cladistics, both useful and widely used but not yet dominant. [In October 2020, the American Museum of Natural History reported new research, surprisingly not based on DNA but on morphology, suggesting the 9,000-ish species of birds is far too low: the figure might be double that. One for the splitters?]

In other cultures, Yoon reports, people tend to use Linnaeus’ binomial structure in their own way: there is a name for a group and a name for each type.  Concerning the 137 known birds of paradise, not only do the locals of Australia and New Guinea know and distinguish almost all, but their groupings are very close to Mayr’s.   Different cultures classify things for different reasons – what mushrooms are edible, what animals live within hunting distance, etc. – but the naming conventions, based on the umwelt refined by accumulated practical knowledge, are not nearly as dissonant as most of us would think.

We are, Yoon thinks, hard-wired to think about animals and nature a great deal, even as small children, and notice types. A toddler who has seen only a few dogs of very different breeds can still tell a newly-seen dog is dog and not a cat. Where animals are lacking, imaginary ones or other things (like brand names) receive the benefit of this innate ability: her daughter's first word was "kiki," which she said while pointing at the Cookie Monster.

Yoon goes n to describe the new methods from Robert Sokal’s computerized analysis of characteristics (species definition had long been a matter of judgment, and in some ways still is),  through the birth of molecular taxonomy based on the chemistry of each organism, and then RNA and DNA, then to cladistics. All of them, Yoon thinks, are valid, but also move us further from the umwelt and into realms where comparing two animals visually becomes irrelevant. She explains some of this very handily by assuming an ultra-simple animal, a blob, and showing how some species diverge widely from the ancestor species and some little, and how these developments can essentially be studied backwards to analyze both evolution and relatedness.

The cladistics revolution began with Willi Hennig, a German fly specialist. The biggest impact of cladistics, to the lay reader, is the seemingly insane claim that there’s no such thing as “a fish,” only superficially similar tertrapods that may have had very different ancestries. The lungfish (her example) may be closer to the cow than the salmon.  This technique not only supports now-common view that birds are dinosaurs, but suggests a reason to completely throw out existing taxonomy except where it aligns with cladistics.

The abandonment of the umwelt, Yoon writes, brings precision but loses the connection between humans and the natural world. She accepts the importance of continually improving the science of taxonomy but argues the now-dominant science of comparing molecules or DNA “has left us blind to our own view of the living world.” If animals are reduced to molecules and proteins, how much will we care to protect them? While taxonomy as practiced by societies historically living closer to nature is invariably local, with Aristotle a pioneer in trying to collect information from foriegn lands, there are reasons it continues to exist.

She discusses as an example the way people once thought of whales as fish [one need only consult Melville for an example]. This view, while scientifically inaccurate, has value in itself in understanding the umwelt and should not be forgotten. Yoon also defends fish and considers that species are, to human senses, “the things we cannot help but see.”

There’s much more in this book, from the loss of ability to recognize living creatures in brain-damaged humans to various thought experiments, and it adds up to a great deal to think about.

For my friends in cryptozoology, the book contributes to the longstanding debate about how well local cultures know their animal neighbors.  There are published examples of indigenous groups, especially farming-centered as opposed to hunting-centered societies, whose members don’t know all the local fauna. Yoon offers numerous examples to the contrary, although she recognizes that need is a major driver of delineation. Indigenous cultures in Indonesia and the Philippines recognize 600 groups, which she considers equivalent to genera, of animals and plants. A striking example Yoon reports concerns the Tzeltal Mayans, among whom it's usual for four-year-olds to distinguish and name almost a hundred plants.

Many taxonomists, probably most (partitculary cladists, who Yoon more than once calls "rabid") will object to her phrasing of "science vs. the umwelt." I don't agree with it either, although I can also read her as not calling for the abandonment of science but for understanding that other concepts offer insights into animals and the people involved.

Yoon in this book does not just describe a science: she makes us think about what science is and how it affects us. It’s a very important work.

Posted by Matt Bille at 9:15 PM No comments:

I bought a trial membership in Meg author Steve Alten’s online venture, Sea Monster Cove (https://seamonstercove.com) to check it out. The basis is that there’s an island site where all the creatures from Alten’s fiction have been brought: there are tours, viewing opportunities, a trailer for a Web TV series, and even hotels with underwater views. I’m not going to review the science here, as my readers know (as Mr. Alten does) that I’ve critiqued him on that a lot. Today, though, I just wanted to see if there’s Dunk-related fun to be had.

The content is still limited. but there is some fun. An online game and more exhibits are promised soon.
The Education Center focuses on the background to Alten’s Lost Sea, where many of his creatures hang out, and discusses the ways (real and speculative) his fish and reptiles could adapt to deep-sea dwelling. The Dunkleosteus shown in the Species Research Center comes with an interesting description: “Overconfident hunter, hard hits on low-level danger prey.” “Overconfident” seems a funny word for the unchallenged apex predator of the Devonian, but it probably makes sense in the predator-stuffed Lost Sea. (Science aside, Alten knows how to make scary toys for his undersea sandbox and have fun with them.) The Dunk’s evolved reproductive characteristics are weird, although far from the weirdest things in this resort.
The Dunk here looks like the model shown at the top of my FaceBook Dunk page, while the animated Dunk, Barkley, is based on a different reconstruction. Barkley has very prominent “wrists” to the fins and what I call the “scimitar” tail. Both look odd to me, but they do appear in some scientific illustrations, so no foul. The viewing opportunities, including one from a shark cage, are fun, and there are snippets of events like Barkley’s mother arriving at the Cove.
My main suggestion (besides, of course, more Dunk experiences) is that expanding the Education Center could do a lot of good. Many of the visitors to a science fiction site like this may want to know more about the real science. The only resource I see is a reference to a shark museum run by Keith Cowley, who’s listed as this site’s Education Director. Links to sites, books, and experts could help them learn about Dunkleosteus, sharks, paleontology, and all the other topics touched on in Alten’s work.
I’ll drop in again at some point and see what shows up next.
(P.S. the online store needs a cooler Dunk hat.)
Top image: Barkley. Bottom: profile in Species Research Center. Used by permission. 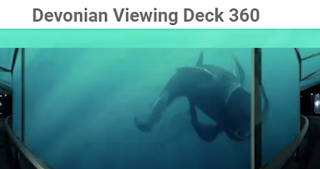 For those interested, my project on a book of cryptozoology book reviews is humming. I intended to cap it at 200 books, but it'll be about 280. I've done all the acquiring / borrowing / etc. and "called a lid" as they say in politics. As it grew, my hope of having it out this year has faded: I'm shooting for January but might not make it. I'm still aiming for low cost as objective #1. Also, I WILL be having a book sale after this is done. 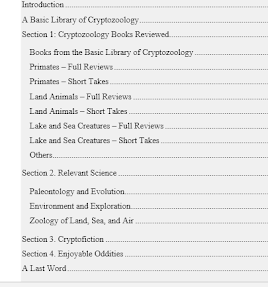 Posted by Matt Bille at 4:12 PM No comments:

I like tardigrades, the microscopic "water bears" that are most famous for being hard to kill. (You may recall some survived in a habitat stuck on the outside of the International Space Station. Vacuum, extreme temperatures, cosmic rays... yawn.)   A newly discovered species glows blue in ultraviolet (UV) light.  One of the effects of this is that UV light levels used to sterilize surfaces, able to wipe out bacteria, virus, nematode worms, etc.) don't kill it.  It seems you're just giving it a spin in a tanning bed.

Posted by Matt Bille at 8:00 PM No comments: