Birding in the South Pacific

The South Island of New Zealand, has long been home to a beautiful black and white cormorant with the cool name of Otago shag (Leucocarbo chalconotus).  Birders and scientists wondered for a long time whether a mistake had been made in the 1800s when classifying the birds as one species: there were differences in plumage, skeleton, and more.  In 2016, the record was straightened out by naming  the Foveaux shag (Leucocarbo stewarti).
By some estimates, about two-thirds of new vertebrates come from museum drawers or reclassifications, rather than being newly identified in the field. That doesn't mean we are not still spotting new ones all over the place - just less often, in fewer places, than in the last century.  The Australian snubfin dolphin and Omura's whale are recent reclassifications of large to VERY large animals, and orcas of course continue to drive cetologists to distraction: there may be ten valid "ecotypes," which may or may no be species or incipient species.
Speaking of new birds and wonderful names, the birds of paradise have captivated humans since earliest times (which included some later times when ladies wore them for hats, not a good deal at all for the birds).  Anyway, over in New Guinea in 2018, a new species was identified by, among other things, having a different courtship dance than the bird it had been lumped in with.  From the west end of the island, in an area known as the Vogelkop ("Birds Head") region, the Vogelkop Superb Bird-of-Paradise has been named.  The original species, the Superb Bird-of-Paradise, also got an upgrade to make the names more distinct, to the Greater Superb Bird-of-Paradise. Those are pretty fancy labels to live up to. I hope the birds are polishing their dance steps.
Link above is on this bird is to Science Daily: The original journal article is
Edwin Scholes, Timothy G. Laman. Distinctive courtship phenotype of the Vogelkop Superb Bird-of-Paradise Lophorina niedda Mayr, 1930 confirms new species status. PeerJ, 2018; 6: e4621 DOI: 10.7717/peerj.4621
Posted by Matt Bille at 9:00 AM No comments:

Why ARE whales that big?

This fascinating bit from Dr. Nick Pyenson in the New York Times explores why whales, which have an earliest-known ancestor not much bigger than my dog (although probably less neurotic) became the giants they did.  We're generally conditioned to think of giants as things of the past (e.g., dinosaurs), but whales are the biggest they've ever been.  Dr. Pyenson believes whales exploded in size (cue joke about that exploding sperm whale in Taiwan) when the first Ice Ages changed the way their favorite prey was distributed, concentrating it in warming waters and essentially giving them such a buffet that limited food was never a factor. (See the study he and co-authors did on that here.)
So could they get bigger? He thinks not, citing studies indicating that the biggest blue whales are about as big as they can get and function physiologically. I think of airplanes as an analogue: you can design a 1,000-ton airplane, but the limits of materials, potential maximum engine efficiency, and so on mean you couldn't build a workable example.
Pyenson also notes whalers cropped the biggest giants for a long time, and modern species might be a BIT smaller than they might have been.  While some big whales are doing ok, some are not (big animals are more likely to get hit by ships, caught in fishing gear, etc.)  and smaller cetaceans are still in serious trouble: one example, the little porpoise called the vaquita, is facing extremely steep odds of survival after a captive breeding venture failed and  the population has  been estimated as low as 12. We can still save most species, if we choose to.
Posted by Matt Bille at 10:43 PM No comments:

A highlight of the year for me (when I get there: I can't always make it) is the Conference on Small Satellites, held in August at Utah State University in Logan, UT.  For over 25 years, this meeting has gathered the experts in smallsats, microsats, and nanosats from around the world.
Microsats (to lump everything under one name) were tiny scientific or amateur satellites until the 1980s and early 90s, when advancing technology and funding from DARPA sparked the first wave of new applications. The MacSat-2 that delivered logistics orders to and from a Marine force in Operation Desert Storm was an example.  Today, there are applications for licensing for constellations totaling (this is not a misprint) 18,000 satellites.  High schools around the world have build CubeSats, those endlessly useful 10cm-cubes.  Continuing technical advances are behind this (ask any engineer in the 1990s if it was possible to get 3m imagery from a 5kg satellite: they would have laughed at you) and don' show any signs of hitting a wall.
So I'll be there this year, talking about the use of microsats as a possible solution for improving the tracking of whales.  It will, I'm sure, be a lot of fun. It always is.

The new TV show "Extinct or Alive" has apparently bagged its first big finding: that the Zanzibar leopard, presumed extinct, is still around. Here's a story with video clip.  Host Forrest Galante thinks the small island leopard is what was filmed - a leopard imported from the African mainland would be bigger.
That puts "Extinct or Alive," in its first season, way ahead of "Finding Bigfoot' which taped 100 episodes without finding - well, anything. Every finding of a presumed-extinct species is a little bit of hope when we are living through Earth's sixth mass extinction.  (Elizabeth Kolbert's superb book on the big picture of this ongoing catastrophe is here.)
Posted by Matt Bille at 7:59 PM 1 comment:

What's on Mars? not life - yet

We have not discovered life on Mars. But we've discovered a tantalizing mystery - or mysteries - that need solutions.
First, NASA has confirmed that Mars does have a methane cycle. On Earth, that's connected to the existence of of quintillions (or whatever) of living organisms, from microbes to roses to whales, doing their things as they respire, pass gas (yes, that definitely matters if you have enough life forms, which we do), dump waste, and die. The Martian cycle is far less robust, only a whisper of Earth's you might say. There are non-living processes that could be involved, but the LACK of a cycle would most likely mean there is no present life analogous to Earth-type life.
Second, Curiosity, the not-so-little rover that could (we tend to think of it as desk-size, but it is in fact the size of a small car and weighs 900kg), has drilled into the surface and uncovered complex organic molecules.  Again, these are not by themselves proof of life, nor are they unquestionably endemic to Mars (they could be deposit from a meteorite or comet strike), but they are what we would find if microbial Martians had been - or still were - buzzing about under the surface. The source rocks, in the Gale Crater, are believes to be about 3 billion years old.
There were preliminary discoveries on both these topics made in 2014, but this, to scientists, is much stronger evidence, derived from different locations, and basically the exobiologists are partying hard.  To them, the $2.5 billion dollars spent on this mission has been justified a dozen times over.
Fingers crossed.
Below: NASA images: Curiosity: Methane cycle with possible inorganic and organic sources. 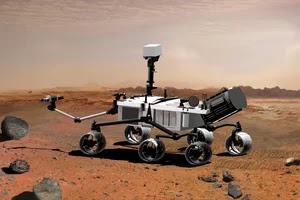 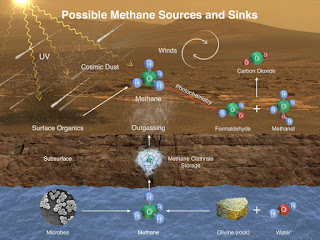 Posted by Matt Bille at 1:09 PM No comments:

Yes, it's time for Denver ComiCon, 15-17 June at the Denver Convention Center.

I will be on two great panels

NASA and other have science/education panels, with scientists and SF writers interacting in some.  DCC is very education oriented, and there are educational programs and an award for Educator of the Year,