Science in fiction: The Judas Strain

The Judas Strain by James Rollins

This takes over the #1 slot with me among Rollins novels: it improves on City of Bones with tighter, better-focused action and, I think, more sound science.
What appears to be a natural phenomenon at Christmas Island in the Pacific - a kind of algal bloom that's more deadly than any seen before - turns out to involve the nefarious Guild, a (real) historical mystery going back to Marco Polo, and the quest for the ultimate biological weapon. Some of the "wisdom of the ancients" stuff is still farfetched (they knew about DNA how?) but this novel only relies on it enough to make the story work. The biological science is scary, very scary, and plausible. Rollins works in known parasites like the liver fluke that go through multiple host species and posits a virus with a similar lifestyle that, like some parasites living on insects, rewires the host (human) body to serve its needs.  (One such ant parasite, a fungus, was the genesis for the X-Files episode "Firewalker.")  I'm hardly an expert on virology or infectious disease, but the whole thing struck me as involving reasonable yet terrifying extrapolations.
The technology throughout this novel works fine: a last-chapter connection between continents on a low-power device initially struck me as absurd, but then I started working it out, and realized you could do it, and do it clandestinely, by bypassing the usual military/intel satellites and hiding it in a civilian system like ARGOS. That was reassuring, as I sometimes feel Rollins treats global communications almost as magic. The details of architecture and history are everywhere convincing, and the heroes have to rely heavily on their brains as well as their guns and gadgets to solve the mystery. Also, one of the early chapters wins some kind of ingenuity award for the cleverest use of a natural "weapon" to take out bad guys.  Rollins usually works in some cryptozoology, which in this novel appears in the form of a new but not unlikely species of killer death squid.
Overall, this is the best-written of the Sigma series, one I had an easy time following but a hard time putting down. 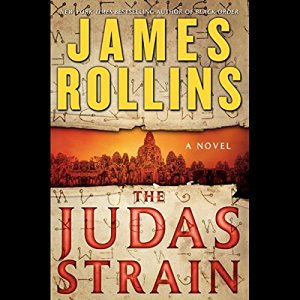 This is a very unusual case. I don't know how broad the ramifications are. But having a physical type specimen was always a requirement to get a new species name accepted by zoologists.  (Two exceptions I know of: a bird that was examined and blood taken, so DNA was retained as the type specimen, and then the bird was set free: and one case (there may be more) using trails on the seafloor as evidence for an unseen invertebrate.)
Now we have a name accepted based on a photo with no DNA or body in hand.  Cryptozoologists should not start jumping up with photos of Bigfoot because there is a caveat: the specimens were trapped and observed closely while being photographed, but escaped. This could get interesting.

Amid the stunning carnage of 9-11, what I remember most is a human moment. I'd returned home after a short workday, somewhat stunned, and my ten year-old, Korey, came bubbling up and said, "Yay! Day off from school tomorrow!" Then she stopped smiling and asked why I was crying. I told her her day off was because a lot of kids her age had just lost their moms or dads, maybe both, forever. She said, "One of those kids can live here. They can have my room."
The most brutal evil cannot overcome simple human love.

I'll get back to whales and space probes next entry. Promise. 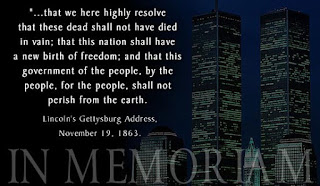 Tom Paxton's song "The Bravest" is a must-listen (done here by Liz McNicoll).
Posted by Matt Bille at 8:14 AM 10 comments:

Not one giraffe, but four?

Various attempts to classify giraffe species and subspecies have been made, based on location, coat patterns, number of horns, etc., but zoologists today basically agree they are all part of  the single species Giraffa camelopardalis. Or at least they did agree.  A new DNA analysis indicates that, while the differences in morphology are relatively modest, there are actually four species.
A study of mitochondrial and nuclear DNA of giraffes in Namibia, intended to help differentiate subspecies and thus clarify breeding lineages for conservationists, stunned the scientists involved with its results. The southern giraffe, northern giraffe, reticulated giraffe, and Masai giraffe - the northern being the "original" G. camelopardalis - have been named.

My friend Dr. Valerie Beason, a genetic expert who didn't work on this study but knows a lot about this area (it was her team that validated the uniqueness of a second species of clouded leopard), commented, "Each day it seems the world of genetics gives us a gift.  This is great news not only for the Giraffes but for those species that share their ecosystems.  As new conservation measures instituted to protect the giraffes will benefit them."

Nature - it can be wild. 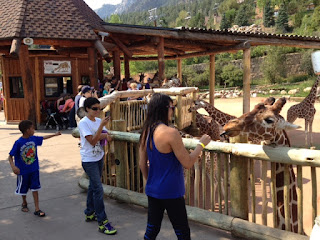 My kids feeding the reticulated giraffe herd at the Cheyenne Mountain Zoo in Colorado Springs.

Farewell to the thylacine

The Earth's largest modern marsupial predator was declared extinct 80 years ago today. I'm quite certain it lingered a couple more decades: some good sightings indicate it may have lingered into the 1980s or even the 1990s.  I wrote in both my books that I hoped the animal survived still, and there are a few indications it might somehow have a surviving population on the Australian mainland even if the Tasmanian animals were all gone..  But on balance, I don't have much hope. 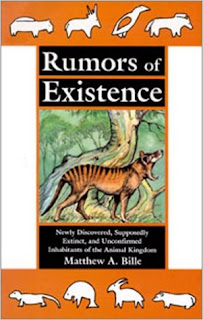 Book Review: Sex in the Sea, by Marah J. Hardt

Sex in the Sea: Our Intimate Connection with Sex-Changing Fish, Romantic Lobsters, Kinky Squid, and Other Salty Erotica of the Deep
by Marah J. Hardt
St. Martins, 2016


If you're going to understand the ocean ecosystem and its countless living components, you have to understand how marine creatures reproduce. Some species need precise conditions that human actions increasingly interfere with; some synchronize their activities based on cues we've been unable to identify: some produce one offspring at a time, others many thousands.


A lobster courting a female will spread his claws as if bowing and wait until the female approves him by tapping him on each shoulder with a claw: it looks weirdly like being knighted. In the actual act of mating, those lobsters are strikingly tender, while our smiling friends the dolphins may go in for gang rape. In the depths,  there are fishes whose mates are completely absorbed into their bodies: humans sometimes joke about how men are nothing but a pair of testicles, but anglerfish males are exactly that. Bone worm males are so tiny they live in the females' bodies: no dating app needed if your guy is always on call like a bacterium in your own bloodstream.  (To understand the comparative sizes,imagine if humans dispensed with external sex and male babies shrank to the size of aspirin tablets to begin their adult lives.) Ecologist Marah Hardt takes us on a trip from fish orgies to right whale threesomes, from species whose organs are practically invisible to the whale penis that chased researchers around inside a boat (I am not making that up.) 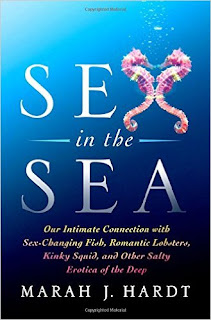 All these details are fun and fascinating, but Hardt never lets us forget they are part of a story: of the endless inventiveness of evolution, of the ever-present drive to survive, and of the interconnectedness of life in great oceans, from the microbes to the monsters.  A terrific and thought-provoking book.