Bringing Columbia Home: The Untold Story of a Lost Space Shuttle and Her Crew

By Michael Leinbach and Johnathan Ward
With Forward by Robert Crippen and Epilogue by Eileen Collins
Arcade Publishing, 2018
The Columbia disaster was a horrible day in history, made worse by the knowledge it was preventable.  The authors tell that story, but they also tell the story of hope and dedication and that old-fashioned and much-maligned thing called the American spirit. 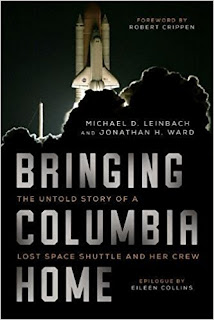 When it became clear the Shuttle's debris - and crew - had come to Earth in East Texas and Louisiana, people responded in their thousands. Entire towns became recovery centers, giving up buildings and vehicles and and everything they had to the searchers who volunteered from the recovery area and from all over America. Astronauts, farmers, truckers, rangers, engineers, Native American fire crews, and  office workers, some paid and some unpaid, swarmed over the extremely difficult terrain, swamp, and forest to find pieces that might be smaller than a dime but still mattered.  While a few jerks tried to steal pieces, and a few bad decisions were made (NASA workers had to use their vacation time for the search - that one is inexcusable), the overwhelming message is about resilience in the face of tragedy.  The authors chronicle how the mission of Columbia became a new mission for just plain folks who cooked, cleaned, refused to take NASA employees' money in their stores, and left a legacy of selfless determination and hope.
The authors also take us to a faraway hangar, where engineers began putting the shuttle's story together, using the pieces flowing in from the field (especially those from the critical left wing)  to reconstruct the accident, learning the cause and learning the many lessons for the Shuttle program and spaceships of the future.  You'll read a lot of compelling stories of individuals, of resilience and its limits, and even a seemingly mystical event involving a stray white dog. You'll read how many different sorts of finds were important - a cassette tape in the branches of a tree, a finger-sized piece of tile from a reservoir, a watch with accident time still showing, a control panel bent so the positions of the switches from astronauts' last efforts to save the ship were preserved. One thing I didn't realize is that the mission isn't over: bits of debris can still go to carefully-vetted researchers and university programs to study the behavior of materials under stresses that can't be duplicated in test facilities.
If you don't cry a few times reading this book, I don't know what to say to you except "Go back and read it again." Anyone interested in the history, present, or future of the space program needs to read this book.