Review: In the Wake of the Sea-Serpents

This is one of the foundational works of cryptozoology, published in English in 1968. How does it hold up?

In the Wake of the Sea-Serpents

In this massive volume, Heuvelmans laid the foundation of marine cryptozoology, as he did for land cryptids in On the Track of Unknown Animals. It wasn’t the first good book on the subject, but was the most comprehensive, and remains so as I write this in 2021. After throwing out many reports as vague or mistaken, he identified 358 cases as offering good information. Heuvelmans provides a worthy starting point for all researchers of the topic. As one example of a case, he suggests the famous 1907 Valhalla sighting by two British naturalists involved a huge eel or eel-shaped fish swimming with its head and forebody out of the water, and he might be right about that one. 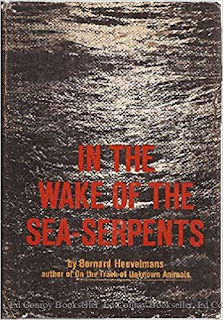 Heuvelmans concluded there were at least seven unknown species involved (five mammals, a reptile, and an eel): he includes two others here, a giant turtle and an anomaly called the yellow-belly, but omitted them in his later works. Understandably, Heuvelmans’ fellow zoologists found the idea of a whole zoo of huge unknown animals hard to swallow. It didn’t help that he went out on a limb with the science, suggesting the ancient whale Basilosaurus had armor and side-fins (highly speculative in 1965 and known to be incorrect now) and saying that “eels are powerful constrictors,” which they are not.

Alas, as with On the Track, no new species have been found that fit any of Heuvelmans’ types. His brief tour of mystery cetaceans notes a few sightings that may match now-identified types lie the tropical bottlenose whale, and this was my first introduction to Wilson’s whale, an Antarctic animal which remains a genuine mystery. He focuses on the unknown species, though, and any that exist are still undiscovered. Nevertheless, this book is a trove of information, gathering most of the known sightings going back centuries. Heuvelmans tries to match these to order and family, even though his proposed genus and species names are invalid without holotypes (physical type specimens used in the formal description of species).

Subsequent cryptozoologists have proposed both more and fewer categories in their own views. One common approach has been to collapse his mammals down to one possible species, as I did in Shadows of Existence (Hancock House Publishers, 2006) and Rob Cornes and Gary Cunningham did in The Seal Serpent: the Search for a Long-necked Pinniped (Independently published, 2019). But In the Wake of the Sea-Serpents remains essential reading for those studying the unknown animals of the deep.

This review is from Of Books and Beasts: A Cryptozoologist's Library, coming soon from Hangar 1 Publishers.