The parade of new species shows no signs of ending.

Many people miss this because popular media covers only discoveries that are spectacular, extremely cute, or extremely scary.  A sizable new shark will turn up on the news services, as will a cute monkey and the occasional colorful bird, but the only sure things is a large land mammal, and those have been limited to reclassifications. Some of these do make the news: the Sundaland clouded leopard, split off from tits Bornean cousin in 2007, drew some attention. I almost forgot the beaked whales, which offer something new every few years - indeed, I wonder when they will STOP showing up. A new species drifted onto an island off Alaska in 2016 (as is not uncommon, it turned out there were some museum specimens) and scientists are actively searching for a beaked whale videotaped by a Sea Shepherd expedition in 2020.  But when is the last time you saw a story about a new mouse? Or lizard? Or frog? Or fish? 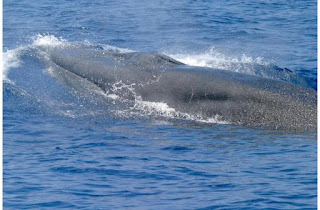 Rice's Whale (Balaenoptera ricei)  Image NOAA
There's a nice sampler in this article on Discover.com from June 15. Writer Brianna Barbu listed seven finds from the first half of the year (there were many more).  Among them are the Emperor Dumbo Octopus, with its ear-like fins, from 1,300 meters beneath the Pacific: the biggest species of the year, Rice's whale from the Gulf of Mexico, split off from Bryde's whale: and a deadly Chinese snake decked in handsome black and white scales, Suzhen’s krait.  Discovery rates for most classes of animals, including vertebrate animals, are still going up.  It's still a big planet.
Posted by Matt Bille at 8:50 PM