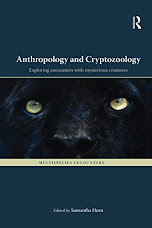 This is a rare academic tome on cryptozoology and a very useful book indeed. There's a lot in here, most based on years of fieldwork, about how different cultures see cryptids and how cryptozoology interacts with anthropology and other fields of study. The authors take cryptozoology seriously, with some praising Bernard Heuvelmans for his work defining the field. There's some jargon ("…the processes of becoming that are co-created through ingestive relationships...") but most of it's accessible. Subjects include the hairy "bush dwarves" of Africa and the Zanzibar leopard (Authors Martin Walsh and Helle Goldman held out a slim hope for the "extinct" population two years before it was caught on videotape. They also recorded there were 21 names in Swahili for leopards or leopardlike animals in the area).  There's a very thorough dissection of a cat reported from the famed island of Flores, which includes notes on the enigmatic “little people,” the ebu gogo, and the fact local people showed scientists the Komodo dragon lived in areas where it had never been officially recorded. Also included are several broader discussions of cryptozoology and the zone between the physical and the mythical. Does cryptozoology include physical animals only (my view) or does it include those which are factual to certain cultures even though they'll never be caught?   Finally, it's superbly referenced.