Review: The Rise and Fall of the Dinosaurs

The Rise and Fall of the Dinosaurs: A New History of a Lost World

In Rise and Fall, the latest in dinosaur science is presented in a highly readable science book doubling as a rip-roaring adventure tale. The story of dinosaurs, not just as fossils but as real animals, is masterfully presented here by paleontologist Steve Brusatte.  I've been reading dinosaur books for 50 years (they were, literally, the first books I ever read), and this volume belongs on the desk of every dino-lover. 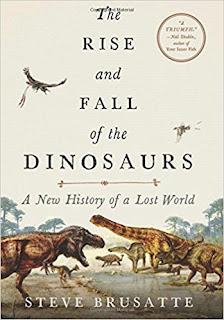 The first thing Brusatte does, superbly, is to put the dinosaurs into context. From the end-Permian extinction through the first phase of the Triassic period, the dinosaur-to-be lineage was one of several vying for dominance, and not as the favorites. Dinosaurs ascended through adaptability and luck, radiating into niches all over Pangea. They left the sea and, initially, the sky to reptilian cousins, but their dominance of the land became absolute. As the world transformed several times over the next 150 million years, the dinos changed with it. They developed thousands of species (a new one is described, on average, every week, one of many things I didn't know before reading this book), culminating in the monstrous predators like T. rex and the stupendous sauropods of South America that grew longer than blue whales. In modern-day China and elsewhere, they also produced relatively tiny forms that adapted to flight and endured as birds.  Brusatte interweaves his science with dramatic tales of the great adventures and colorful lives that unfolded as people sought out new fossils and argued over what they meant. We also meet today's leading dinosaur palentologists in quick, incisive sketches that explore the frontiers of dino-science.
T. rex is the only dinosaur that gets its own chapter (and why should it not)? Brusatte weighs in on the controversies over whether T. rex had feathers and whether it hunted in packs, arguing for "yes" and "yes." (Also, did you know young rexes grew at the rate of 5 pounds per day? Neither did I.)
At the end, he takes us on a harrowing journey with the last dinosaurs as they watch death bloom from the sky.  Brusatte mentions other theories about dinosaur extinction but is adamant the global disappearance of fossils in the same era, geologically speaking at the same moment, is decisive.
The author reminds us repeatedly that dinosaurs are not merely skeletons or film stars (taking several shots at Jurassic Park along the way: indeed, he's a little too harsh, given the modern dinosaur-science revolution was far from mature). They were dynamic, evolving, living, breathing animals that ruled the Earth for a thousand times as long as modern humans have been dominant. The science will continue to evolve, but it's hard to imagine a better treatment of dinosaurs in a mere 350 pages of text is on the horizon.
Posted by Matt Bille at 8:23 PM