Far-Out, Shaggy, Funky Monsters: A What-It-Is History of Bigfoot in the 1970s

This is a unique Bigfoot book, and not only because you could stop a charging apeman by bonking him on the head with this monster-sized tome.  As the author says, the 1970s were the real heyday of Bigfoot / sasquatch / etc., when the modern interest sparked by the Jerry Crew report in 1958 had been raised to another level entirely by the Patterson-Gimlin film and the topic crew massive public interest and came close to scientific respectability.  Green has uncovered seemingly every significant report, sighting flap, footprint claim, book, movie, whatever and presents a year-by-year chronicle of North America’s favorite monster.  Scattered throughout are tidbits for the determined researcher as well as the casual curiosity-seeker. The Sasquatch Festival of 1938 is our (little-known) kickoff point for a short pre-1970s history, and then we get into the reactions to the P-G film and the real fun begins.  We see the sightings all over the country (a new one to me was a report by three Marines in 1973: young Marines like their jokes, but making a hoax official report? Hmmm.)    Green covers the first films and documentaries, especially the shoestring hit film The Legend of Boggy Creek, and of course the Minnesota Iceman first described in print in 1969 and the constantly changing stories attached to it.  The scientists who took an interest (pro or con, with a bit more attention here to the “pro”) are covered, as is the first serious scientific book, Napier’s 1973 Bigfoot, and the major tomes that preceded and followed it up through anthropologist Kenneth Wylie’s 1980 Bigfoot. Green introduces us to many of the colorful characters, like hunter/hoaxers from the late Jon Beckjord (who seems to have been busier than I remember – yes, I remember the 70s) to the still-at-it Tom Biscardi, the completely serious if not always scientific searchers for knowledge, and the people like Stan Gordon who connected Bigfoot to UFOs and other “high strangeness.” (One takeaway is that it is frankly astonishing that no one was ever shot in the swarm of armed amateur expeditions and hunting parties attending many major sighting events.) 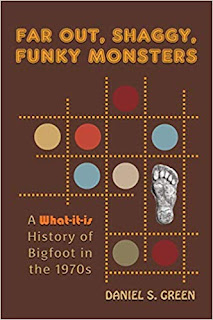 The sheer weight of material Green presents here is enough to make anyone wonder whether there is in fact a real species behind all this, even as the nationwide distribution and endless differences in descriptions and footprints makes it hard to reconcile with a believable animal (or even more than one animal).   Publications others have largely overlooked, like the Baltimore Afro-American newspaper (still publishing today), are used as Green chases the tale all over North America, from Alaska down to the Honey Island Swamp Monster and the Florida Skunk Ape. He takes us through the initial wave of conferences and meetings, the beginnings of the “kill-no kill” debate, and of course more sightings, from Ogden, Utah, to Powderly, Texas (Green’s best section headline, without doubt, is “The Tunnel Monster of Cabbagetown.”)
Green doesn’t try to wrap all this up into any personal overall views at the end (I wish he had), but he leaves us with over 100 pages of annexes, blogography, notes, and do forth. The amount of research done for this book makes my head ache.   Green’s evenhanded, sometimes bemused approach and mass of data may not make many converts one way or the other, but he has created a cultural history of our favorite monster’s most famous decade in a volume that will not and probably cannot be surpassed. For those who can manage the hefty price of this hefty book, it’s a must-have reference for anyone interested in North American primate claims, cryptozoology, and the cultural phenomenon that was, and still is, Bigfoot himself, both monster and myth.