Vaquita: Science, Politics, and Crime in the Sea of Cortez
by Brooke Bessensen
Island Press, 2018

The vaquita, the world's smallest cetacean, once numbered thousands of animals in the Sea of Cortez. Then it was hundreds. And then it was a handful so small that every death could be the tipping point to extinction. (The estimate in this book is 15: there is a new study saying it might be as high as 30, but it's small comfort.)  It was only discovered by science in 1958, and it may be the second species of cetacean to be driven extinct. 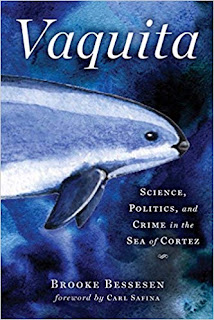 The author, with endless determination and at no small risk to herself, explored both the world of the porpoise and a web of greed and corruption as deadly as the gillnets that may be the last thing the last vaquita ever sees.  Illegal fishing for the totoaba, a human-sized fish whose swim bladder is worth more than cocaine on the Chinese market, continues despite official proclamations, laws, and even a unique agreement by Mexico to allow Sea Shepherd ships to confiscate illegal nets. For every effort or official announcement of more protection, there is a corrupt government official, a crime lord, and/or a desperate or greedy fisherman willing to circumvent it.  An astonishing narrative has sprung up among local fishermen: that the vaquita does not exist, being only a prop for some kind of American-Mexican plot to turn the region into an oilfield. A laudable program to pay fishermen to use safer gear or switch to non-fishing businesses is spotty in practice thanks to corruption, endless delays in permits and paperwork, and the unending demand for totoaba (whose population is also shrinking fast).
Brooke Bessesen explores the world of the local villages, where she meets people who risk everything to save the species and people who simply will not talk about it, plus those who doubt its existence (she notes fairly that many younger fisherman have never seen one, but many who know better have talked themselves into the myth). She chronicles the efforts of conservationists, artists, and educators to support the animal, and the desperate and heartbreaking attempt to save the vaquita by captive breeding.
Bessesen ends on a determined note: we may or may not save the vaquita (the odds, while not yet zero, are not good), but she will tell its story. She will not let its spirit die.
If the heroes in this book do not inspire you, you have no heart: if the villainy does not infuriate you, you have no soul.  That's how memorable this book is.
Posted by Matt Bille at 9:15 PM